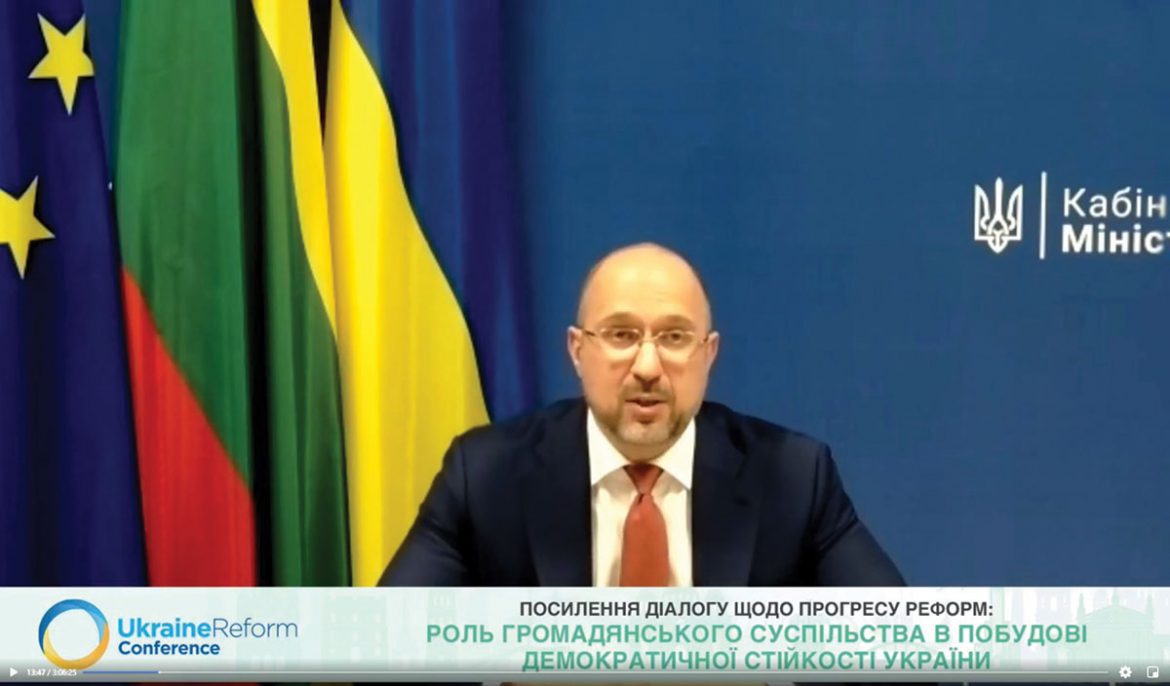 Ukrainian Prime Minister Denys Shmyhal addressed participants of an online forum dedicated to the topic of reforms in Ukraine via video conference on June 30.

WASHINGTON – In an ongoing effort to implement a series of reforms that are needed for Ukraine to gain entry into the European Union and the North Atlantic Treaty Organization, Ukrainian Prime Minister Denys Shmyhal said that the country’s civil society will be a key partner in the reform process.

Therefore, “creating conditions for the development of civil society is a priority for the government of Ukraine,” Mr. Shmyhal said during opening remarks he gave at an online forum on June 30 that was organized by the Reanimation Package of Reforms (RPR), a Kyiv-based coalition of non-governmental organizations.

The event was held in preparation for the Ukraine Reform Conference, which is a high-profile annual international event dedicated to expert discussion of Ukrainian reform progress that took place in Vilnius, Lithuania, on July 7-8.

Leading up to the Vilnius conference, Lithuanian Prime Minister Ingrida Šimonytė reminded the audience about the crucial role that Ukrainian civil society plays in advancing reforms in Ukraine.

“I bow my head in respect and admiration to you,” Ms. Šimonytė said. “Ukraine’s path toward true independence, European integration and democratic reforms began on the Maidan, where free citizens gathered to decide their own destiny. The voice of the Ukrainian people was loud and their choice was absolutely clear. The Maidan has become a birthplace of a new Ukraine, a Ukraine that is united and reformed. And at the same time Maidan is synonymous with Ukraine’s strong civil society – one that many countries, actually, could envy. Seven-and-a-half years have passed since those days, the days of tough determination, sacrifice and glory. But civil society still remains the driving force of reforms in Ukraine.”

Ms. Šimonytė made clear that further progress depends on the Ukrainian government genuinely respecting the input of civil society, stating that “much has been achieved [but] a lot still remains to be done to build a country your heroes have fought for – a truly democratic, strong and prosperous country.”

She pledged Lithuania’s continued friendship and support in achieving that goal.
“But Ukraine will succeed only if the government and civil society work together, if they maintain a real dialogue, unwavering resolve and ownership of the reforms-that-are-needed process,” the Lithuanian prime minister said. “No democratic country can be a success story without civil society. And Ukraine has a strong one. The task for us politicians is to listen to it and to empower it.”

Also speaking at the forum were several representatives of civil society who provided assessments of the government’s and parliament’s reform track record. The presenters in this group were Yuliia Kyrychen­ko (co-chair of the RPR Coalition Board, member of the Centre of Policy and Legal Reform Board), Mariya Heletiy (deputy chief of party, ISAR Ednannia), Mykhailo Zhernakov (head of the board, DEJURE Foundation), Roman Smaliuk (expert on the judiciary, Centre of Policy and Legal Reform Board) and Andrii Borovyk (executive director, Transparency Ukraine).

While acknowledging a number of reform achievements of the government and parliament, their list of reforms that are still needed was quite long and concerning.
Kara McDonald, U.S. deputy assistant secretary of state for democracy, human rights and labor, focused on many of the reform priorities raised by the Ukrainian activists. She highlighted the need to address a set of reforms designed to strengthen what is often referred to as Ukraine’s anti-corruption architecture. She specifically mentioned reforms relating to the National Anti-Corruption Bureau of Ukraine, the High Council of Justice, the High Qualifications Commission of Judges, asset declarations, the selection process for the Specialized Anti-Corruption Prosecutor, corporate governance, the Security Service of Ukraine and the independence of the High Anti-Corruption Court.

Ms. McDonald explained that these reforms all pertain to ending impunity and building the institutional capacity to hold corrupt actors accountable.

“Ukraine has come a long way since the 2014 Revolution of Dignity and we should acknowledge the effort and progress that has been made since that time. Today, Ukraine is stronger, it’s more prosperous and more accountable to its people,” Ms. McDonald said. “However, we have seen the oligarchs and vested interests of old Ukraine that are relentlessly working to undermine these achievements and to prevent forward progress and momentum. Corruption remains an existential threat to a prosperous, free and democratic Ukraine, and there is still much work to be done to prevent backsliding and to carry forward judicial reform and other reforms.”

Describing the toxicity of corruption for democracy, Ms. McDonald said that it erodes public trust, undermines human rights and hinders economic development and prosperity. And from a national security perspective, corruption creates opportunities for Russia and its proxies to buy or to exercise undue influence in Ukraine.

“Effectively combating corruption will require a comprehensive doubling down on multiple, interconnected lines of effort,” she said.

But she also offered words of support and encouragement for the Ukrainian non-governmental sector in its effort to promote reforms.

“I would like to acknowledge the significant contributions of Ukrainian civil society to advancing reforms in these areas, [for] all of your work. Thank you to the brave and tireless advocates, the watchdogs, the journalists, for everything you do to ensure a brighter future for all Ukrainians,” Ms. McDonald said. “Your work is very much what we see as democracy in action. We stand with you and the people of Ukraine in resisting malign actors who seek to obstruct Ukraine’s Euro-Atlantic integration and this reform effort.”

One of the moderators of the forum, Jonathan Katz of the German Marshal Fund, noted that Ukraine’s reform agenda was sure to be an important part of the upcoming meeting in Washington between U.S. President Joe Biden and Ukrainian President Volodymyr Zelenskyy.

Responding to some of the civil society criticisms of reform shortcomings, Mr. Shmyhal defended the government’s record by highlighting a number of reforms that were adopted, including those pertaining to energy, the environment, support for small business, privatization and the sale of agricultural land. He again emphasized his appreciation for the efforts of civil society.

“Indeed, a strong civil society and an effective interaction with it is truly an important component of successful implementation of reforms within the triangle of government-parliament-civil society in Ukraine,” Mr. Shmyhal said. “It is truly one of our priorities. Not long ago the government approved a draft presidential national strategy to support the development of civil society in Ukraine for 2021-2025. It is a signal and a symbol of where we are going and what our priorities are. The development of the strategy itself is an example of a good interaction between the government and civil society.”

Mr. Shmyhal described the extensive engagement of civil society in the process.

In his remarks, First Deputy Speaker of the Verkhovna Rada Ruslan Stefanchuk spoke highly of parliament’s engagement with civil society and quipped that in their assessments of reform progress the civil society representatives were not able to keep up with all the reform legislation that is being adopted, including the most recent vote regarding the High Qualifications Commission of Judges.

Andrius Kubilius, a member of the European Parliament who spoke during the forum, said it was time for the EU to develop “a larger strategic attitude” in terms of being more pro-active in using the “promise of integration” for Ukraine into the EU. In other words, the EU should offer a “clear membership perspective” to Ukraine in order to help sustain and empower Ukrainian reformers, as was the case with central European countries that aspired to join the European Union.

Adrian Karmazyn is vice-chair of the Transatlantic Task Force on Ukraine.