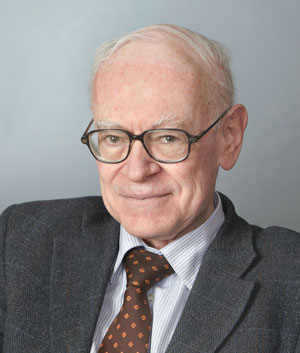 TORONTO – The late professor Dr. Bohdan Medwidsky passed into eternity as a result of the COVID-19 virus. A brother, uncle, brother-in-law, founder and benefactor of the Kule Folklore Centre and the Bohdan Medwidsky Ukrainian Folklore Archives at the University of Alberta, Edmonton, Mr. Medwidsky was 84.

He leaves behind in sorrow close family, friends and colleagues in Ukraine, Canada, the U.S. and other countries of the world.

Born in Stanislaviv (now Ivano-Frank­ivsk) Ukraine, he spent 10 years in a Switzerland sanatorium beginning at age two because of health issues. As a result of World War II, he was separated from his family during this time. As a consequence of his illness, he suffered a lifelong handicap, but it never held him back from being able to achieve his lifelong endeavours.

In the late 1940s, at the age of 12, he was reunited with his family and a brother who he met for the first time in Vienna. In Lexenfeld, Germany, in a displaced persons camp, speaking only French and German, he re-learned his native Ukrainian language under the gentle tutelage of his mother Natalia. At that point he developed a deep love for his Ukrainian roots. The family came from a long lineage of priests, which gave him a lifelong direction in his spiritual life. The young family was sponsored to Canada after the war and they settled into the large Ukrainian Canadian immigrant community in Toronto. There the family and Bohdan learned a fourth language: English.

As a young teenager, the foundation for his lifelong voluntarism as well as that of an educator was formed during his time in the Plast Ukrainian Scouting Organization. He was a long-time “vykhovnyk” (scout leader) of “yunaky” (scouts age 11-17) and later became a member of the fraternity “Burlaky,” remaining an active member of Plast and his fraternity until the end.

After completing his university studies, he married Ivanka Hlibowych in Toronto, on September 13, 1969. They moved to Ottawa and between 1969-1971 he began teaching courses in Ukrainian and Russian (his fifth language) at Carleton University. In 1971, Mr. Medwidsky accepted a position in Ukrainian linguistics at the University of Alberta. This was a happy but tumultuous time. Shortly after their marriage, Mr. Medwidsky’s beloved wife became very ill and passed away in 1975 at a young age after only six years of marriage.

After Ivanka passed away, he defended his doctoral dissertation in 1977 at the University of Toronto and remained in Edmonton where he found his professional home and spent the remainder of his life and career.

Mr. Medwidsky’s proudest achievement was his role as founder and benefactor of the Ukrainian Folklore Program at the University of Alberta. Through his personal initiative, he raised funds and convinced the university administration that the study of Ukrainian culture should be part of the university’s offerings. He leaves behind an extraordinary legacy which includes many community-based projects promoting Ukrainian culture which have directly benefitted museums, dance ensembles, musical groups and other community organizations.

He was awarded honors from the Ukrainian Canadian Congress, Plast and Ukrainian President Viktor Yushchenko for his academic, philanthropic and volunteer work. However, he remained a man of humility, great generosity and deep spirituality, always preferring to remain in the background.

The Ukrainian language, customs and rites were the driving force behind Mr. Medwidsky’s dedication and life’s work. His mission was to ensure that the beautiful Ukrainian culture would never be forgotten and should be preserved in Canada and throughout the world. The Ukrainian community has lost an incredibly passionate, devoted academic, community leader, philanthropist and volunteer. He touched many lives. In Plast he educated many young scouts and later as a professor he mentored countless students and will be remembered for his compassion, sharp wit and sense of humor.

After his death, the University of Alberta honored Mr. Medwidsky’s memory by lowering the university flag to half staff. This honor could not have been achieved without the countless colleagues and staff at the Folklore Centre who were responsible for this tribute.

To his family he was affectionately known as “Stryjko Litak” (uncle airplane) for the many trips he took back to Toronto for family gatherings, holidays and celebrations. One of his last words was “trymaymosia” (let’s keep holding together). This he did by holding on to pass away peacefully on March 28, the very day of his cherished wife’s birthday, while listening to streamed Sunday Mass from his beloved St. George Ukrainian Catholic Parish.

Funeral services were held on March 31 and were officiated by the Rev. Danylo Kuc, pastor at St. George Ukrainian Catholic Parish in Edmonton. From there his remains were transported by plane to Toronto – his last airplane trip to his family where the second half of his funeral services on April 3 were officiated by the Rt. Rev. Dr. Roman Lobay, pastor at St. Nicholas Ukrainian Catholic Church – the parish of his youth. In these most challenging times of the COVID-19 pandemic, although a very limited number of persons attended the funeral services, through live-streaming many more were able to take part in the services virtually.

The family had the late Mr. Medwidsky buried with a “poderty cherevyk” (a torn boot, which is a symbol of his Burlaky Plast fraternity) as a memento of his Plast fraternity wedding. The torn boot was placed inside his coffin. He was interred with his parents on April 3 at Prospect Cemetery in Toronto.

On the 40th day after his passing into eternity, on May 6, which is St. George’s Feast Day, masses and requiem services were celebrated both in Edmonton and Toronto. The melody of “Khrystos Voskres” (Christ is Risen) during the requiem services accompanied the soul of the late Mr. Medwidsky to his final resting place and to his eternal “vatra” during the Holy Week of Easter – his most beloved church feast. May his memory be eternal!

The following statement was released by the family of the late Prof. Bohdan Medwidsky on the occasion of his recent passing.

We would like to express a sincere thank you to Rt. Rev. Dr. Roman Lobay, pastor of St. Nicholas Ukrainian Catholic Church in Toronto, for his pastoral help and counsel regarding the funeral services and especially his moral and spiritual support to the family during these most challenging times of the COVID-19 pandemic. Thank you to the cantors Ihor Maheha and Roman Lekhman for their melodious singing that enriched the beautiful church rites that the late Bohdan so loved, and to Zachary Pokry­shchak for undertaking the live streaming of the funeral services that allowed family, friends and colleagues in all corners of the world to take part virtually in Bohdan’s funeral.

Thank you to Rev. Danylo Kuc, pastor of St. George Ukrainian Catholic Parish in Edmonton who prepared Bohdan’s final journey to the after-life by hearing his confession and bestowing him his last rites, as well as visiting with him in the hospital and virtually. The funeral memorial service at his beloved St. George Parish and the kind words of support helped the family to prepare for his last journey and gave the family moral strength for the funeral services in Toronto. The serene singing of the cantors and Plast members in the church as well as the farewell speeches of his brothers from the Ukrainian Catholic Brotherhood of Canada will remain as an unforgettable memory for the family.

A special thank you must be reserved for University Folklore Archivist Maryna Chernyavska, the family representative in Edmonton, for her long working relationship with Bohdan, to her personal care for his well being and especially in the last days for the tremendous time and effort spent in helping with funeral arrangements in Edmonton and all the writing and translating. Likewise, thank you to Dr. Andriy Nahachevsky who researched and put together a very in-depth biography of Bohdan. Without this enormous help it would have been impossible to achieve all the necessary funeral preparations.

Sincere gratitude to Dr. Zenon Kohut and his spouse Zirka for Prof. Kohut’s unwavering 30-year friendship. Their daily calls in the last few years at 7 p.m. with news from Ukraine and politics to the end of Bohdan’s life in the hospital were truly a great moral support as well as a welcome distraction in Bohdan’s life. Also, their advice and counsel from afar were welcome and very helpful to the family.

A heartfelt thank you to all his friends, colleagues, staff and co-workers at both the University of Alberta and all the various organizations in which he participated and volunteered so much of his time and especially the friendships that were realized because of his work. Although many of you are unknown to the family, these friendships are greatly valued because you were like a second family to him in Edmonton.

An immense thank you to the whole family and mutual friends, as well as Bohdan’s friends and colleagues for their generous donations to the causes he held so dear, for the flowers, prayers and masses and especially the condolences of sympathy both written and expressed by telephone. There were some interesting, written memories of his youth at Plast and during his many years of professorship that were shared with the family. These will remain as precious remembrances for the family as well as moral support during these sorrowful times.

Finally, we must acknowledge and graciously thank the directors at the University of Alberta and all those who initiated the lowering of the university flag to half mast until April 6 in honor of the passing of the late Dr. Bohdan Medwidsky. For the family, this was truly a touching tribute which will not be forgotten.

We call on all to continue to support the late Dr. Bohdan Medwidsky’s scholarly works as well as the legacy he leaves behind. Long live Ukrainian folklore. Trymaymosia! May his memory be eternal!