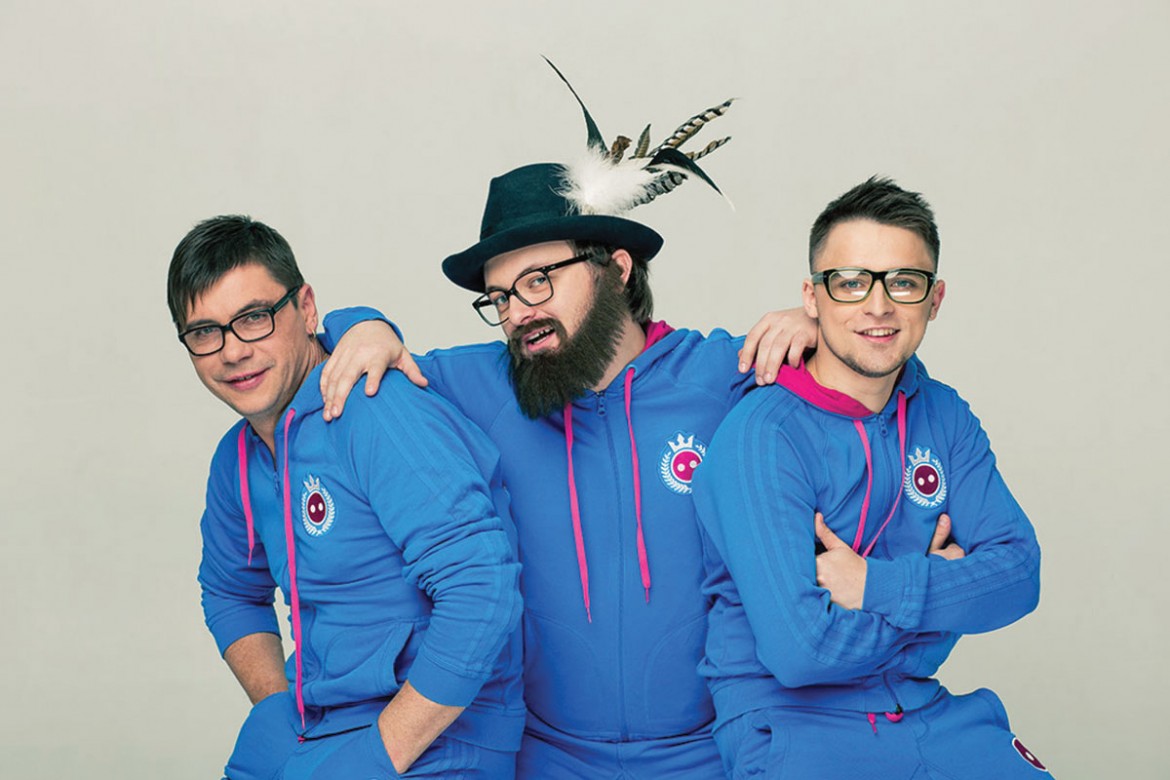 The pop group Dzidzio from the Lviv region of Ukraine.

KERHONKSON, N.Y. – The ninth annual Ukrainian Cultural Festival at the Soyuzivka Heritage Center is being held on July 10-12 with the help of its sponsor, the Ukrainian National Foundation (UNF). The Embassy of Ukraine is the festival’s patron.

This year’s festival, emceed by Serhiy “Foma” Fomenko of the rock group Mandry and Marta Czurylowicz of the Canadian TV program “Kontakt,” has a packed schedule of performers. New this year will be the Lehenda Ukrainian Dance Company from Melbourne, Australia, in its first U.S.A. tour. Acts from Ukraine include the humorous lampoon artist Dzidzio, “Ukraine Has Talent” winner Pavlo Tabakov, singer Oksana Bilozir, as well as Foma, who in addition to his emcee duties will also perform. From Canada, Vasyl Popadiuk will enchant with his fiery gypsy violin music. 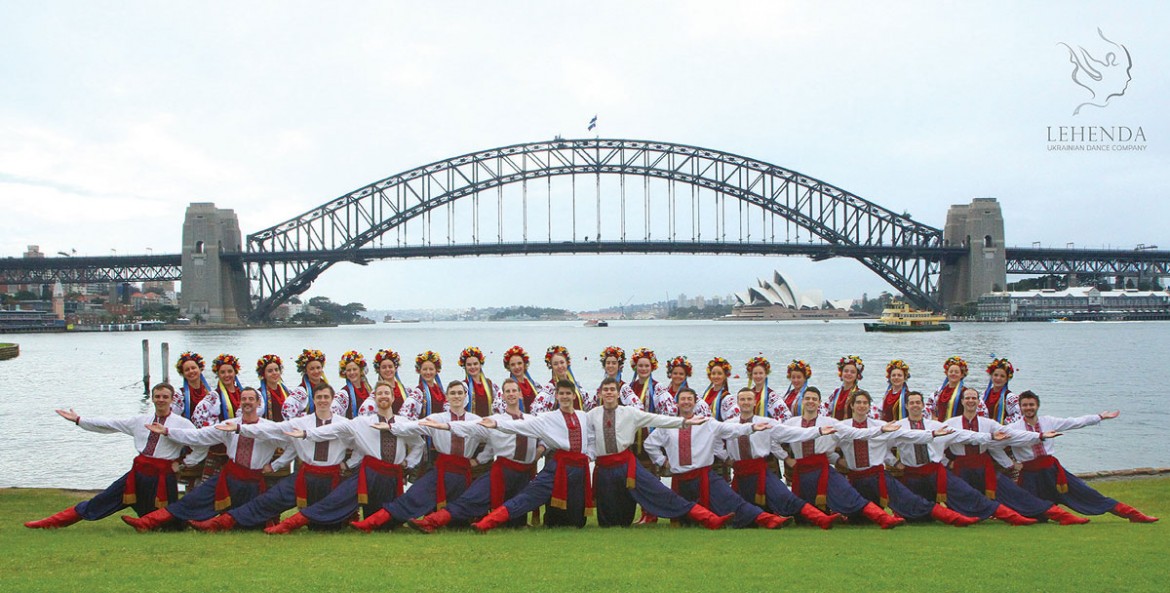 Lehenda Ukrainian Dance Company of Australia in front of two iconic Aussie landmarks: the Sydney Harbor Bridge, with the Opera House in the background.

A brief rundown of the acts

The Lehenda Ukrainian Dance Company, founded in 2014, includes 40 dancers under the direction of Melanie Moravski Dehnicz, a Merited Artist of Ukraine (2009). Ms. Moravski Dehnicz has also been an instructor at the Roma Pryma Ukrainian Dance Workshop and is the artistic director for Lehenda’s latest production “Kazka” – a fairytale of love, loss … and a mysterious blue fox. Excerpts from this production will be performed at the festival. For more information, readers may visit www.lehenda.com.au.

Dzidzio (Mykhailo Khomo) is an irreverently humorous performer from Lviv, who combines his vocals with that of Lesyk (Oleh Turko), on guitar and back-up vocals, and Julik (Nazar Huk), keyboardist and back-up vocalist. Dzidzio has done numerous concerts to benefit Ukraine in the face of Russian aggression, and performed during the Euro-Maidan Revolution of Dignity in Kyiv. More information can be found on the website www.dzidzio.com. 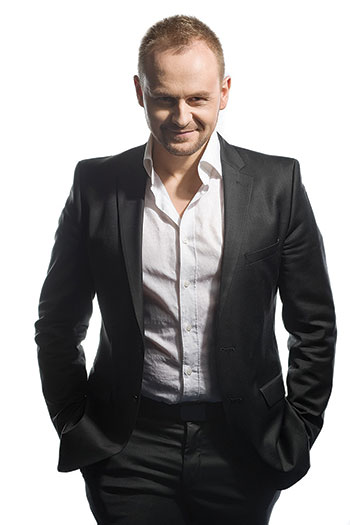 Singer Pavlo Tabakov, a winner of “Ukraine Has Talent.”

Mr. Tabakov, who also hails from Lviv, is signed with Universal Music Group (after winning “The Voice of the country” competition in Ukraine in 2012) and studied professionally on accordion, piano and guitar. His latest CD (of five), “Myi Svit” (My World), was released in 2013 and features a range of songs from slow ballads to energetic pop. In 2010 he was a semifinalist in the “Ukraine Has Talent” show as a member of the Orfei (Orpheus) male octet chorus. More information can be found at http://pavlo-tabakov.com.

Ms. Bilozir, a former Minister of Culture and Tourism of Ukraine (2005), has 15 albums to her credit. Her popular music varies from traditional favorites to originals appealing to a wide audience.

Foma, who is the lead vocalist and guitarist for Mandry, combines folk-rock, blues and ska to liven its sound. The band’s 2006 hit “Ne spy, moya ridna zemlia” (Do not sleep, my native land) had become an anthem following the Orange Revolution and then again during the Euro-Maidan Revolution of Dignity. Foma has regularly performed at benefit concerts, both in Ukraine and across the diaspora, to support those affected by the war in Ukraine.  More information about Mandry can be found at www.mandrymusic.com.

Friday evening, beginning at 8:00 p.m., will feature a star-studded Charity Gala Fund-Raiser and Reception to support a center for prosthetic rehabilitation for the war victims of Ukraine. The UNF has partnered with the International Alliance for Fraternal Assistance (IAFA), a registered NGO, which was awarded recently as one of the best charitable organizations working in Ukraine. Tickets for the Charity Gala, sponsored by the UNF, a charitable 501 (C) (3) corporation, will be $200 per person  The evening includes a meet and greet with some of the featured artists and a lively private show featuring the festival stars.

The festival atmosphere, in addition to the featured performers and dancers, will be filled with music, song, dance and of course traditional Ukrainian food.  And there is the Varenyky-Eating Contest for those brave enough to take on the challenge.

Festival vendors will also highlight folk art and souvenirs, as well as an all-day film festival that will focus on all things Ukrainian. An exhibit, “A Day in the life of a Ukrainian village,” will also be on display.

Sunday will feature the “Young Artists Concert,” which will spolight emerging talent from the diaspora.

Roma Lisovich, treasurer of the Ukrainian National Association and the Ukrainian National Foundation, stated: “The festival is an opportunity to unite all Ukrainians around the world in support of Ukraine’s struggle for democracy. It is the hope to cultivate a spirit of ‘solidarity with Ukraine’ and increase the public’s awareness about the war in Ukraine. Many community organizations will be present to provide information and background materials on Ukraine.”