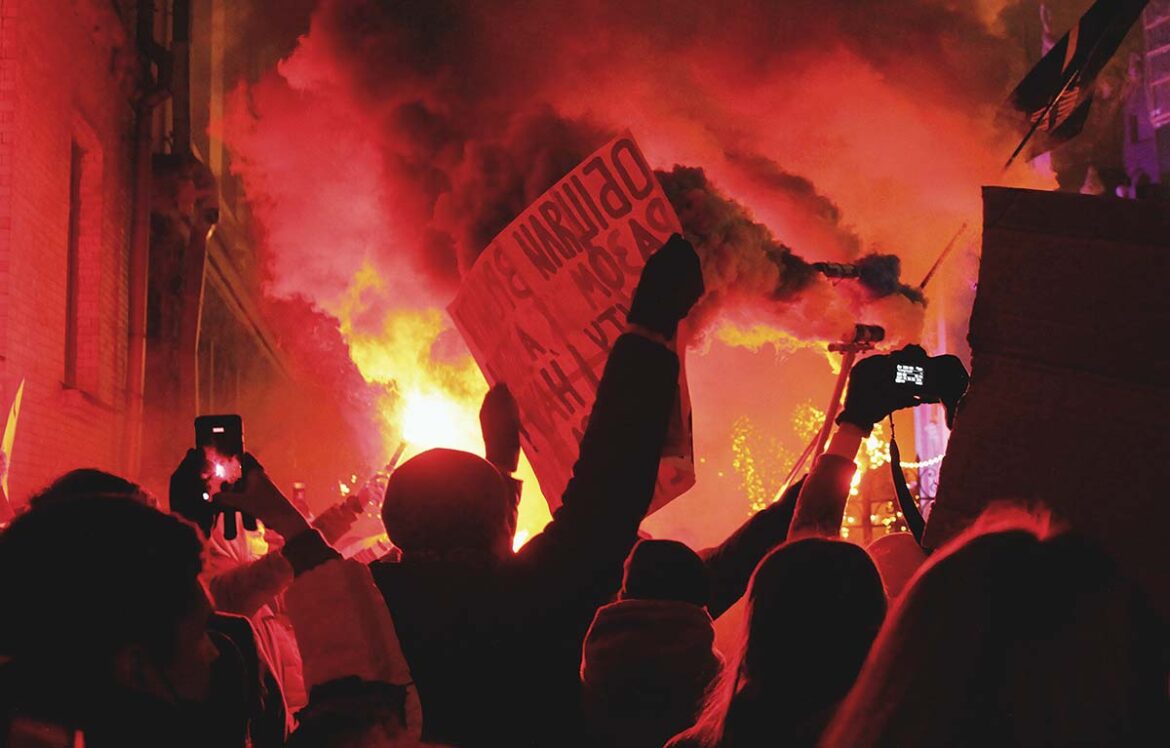 Students and educators gathered in front of the presidential office to protest the appointment of Serhii Shkarlet to the position of minister of education and science of Ukraine.

KYIV – Several hundred people, including students from Kyiv’s leading universities, members of youth and student organizations, academics, and parents, gathered in front of the presidential office here on December 21 to protest Parliament’s decision to appoint Serhii Shkarlet to the position of minister of education and science of Ukraine.

On December 17, 226 national deputies – the minimum required – voted to appoint Mr. Shkarlet to the position.  Members of the Holos Party, however, claimed that eight deputies whose votes had been counted in favor of Mr. Shkarlet’s appointment were not present when the vote took place, which Holos Party deputies said meant that those eight votes were not cast legally.

This was not the first instance in which students and educators expressed their disapproval of the new minister. Public outcry first started six months ago when Mr. Shkarlet was originally considered for the position. In June, he was appointed acting minister of education despite numerous letters from academics, educators, and representatives of student organizations who wrote arguing against Mr. Shkarlet’s appointment to the position.

Educational reform is one of Ukraine’s fundamental challenges, the protesters wrote in their open letter, “because it is about the quality of education of our children who will help build the economy and other important areas of the country’s life.”

Critics of Mr. Shkarlet’s point out that he was a member of the Party of Regions and worked with President Viktor Yanuko­vych’s reviled Minister of Education Dmytro Tabachnyk. Mr. Shkarlet has also been suspected of corruption and plagiarism. Nevertheless, both President Volodymyr Zelenskyy and Prime Minister Denys Shmyhal supported him for the education minister’s role. As a result, Mr. Shkarlet was appointed acting minister in June even though the Verkhovna Rada committee on education did not vote to approve the appointment.

In response to the news of Mr. Shkarlet’s appointment to the position of minister of education and science of Ukraine, protests broke out in several cities throughout the country, including Chernivtsi, Vinnytsia, Chernihiv, Zhytomyr, Odesa, Kharkiv, Mykolayiv, Lviv, Khmelnytskyy, Sumy, Ternopil, Lutsk, Kryvyi Rih, Dnipro and Stryi (Lviv Oblast). The protests were coordinated under the banner “Stop Shkarlet.”

During the largest of the protests, which took place in Kyiv and included roughly 300-400 people, representatives of educational, youth, and student organizations signed an official appeal to Mr. Zelenskyy demanding the minister’s dismissal.

“We, students, believe that a plagiarist and a former member of the Party of Regions cannot head the Ministry of Education and Science. That’s why we’re announcing the ‘Stop Shkarlet’ protest campaign. We call on academics, teachers, parents, students, activists and all concerned to join the protests and we demand the appointment of a worthy head of the ministry,” said Daniil Lubkin, head of the Ukrainian Students for Freedom organization.

Protest organizers said they believe Mr. Shkarlet cannot head the Ministry of Education and Science, and they pointed out that the National Agency for Quality Assurance in Higher Education accused Mr. Shkarlet of plagiarism in four of his previous academic papers.

“There are a lot of plagiarists in Ukraine, but in my social environment, academic dishonesty ends with expulsion,” said Tetiana Buts, a student who took part in the protest. “It’s a strange logic: if you were expelled from the university, that’s okay, and you can go to work in the government.”

Critics of Mr. Shkarlet’s from the academic community said that, as acting minister of education, he did not prepare Ukraine’s schools for the new school year and he did not ensure the purchase of personal protective equipment for educators.

“The appointment of Serhiy Shkarlet as minister of education and science is a shame for Ukraine and the Ukrainian Parliament,” said Natalia Pipa, a national deputy from the Holos Party and secretary of the Verkhovna Rada Committee on Education, Science, and Innovation.

“Mr. Shkarlet is satisfied with the old system, when diplomas and degrees could be bought, and you could enter university with a bribe,” Ms. Pipa said.

“This person is unprofessional and dishonest. He became an academic due to plagiarism and he became a minister as a result of button-pressing,” Ms. Pipa said, referring to the manner by which Parliament voted for Mr. Shkarlet. She added that the Holos Party will show that the vote in Parliament for Mr. Shkarlet’s appointment was not valid, “and we will seek Mr. Shkarlet’s resignation.”

Ms. Pipa also point out that video cameras in the Verkhovna Rada showed 12 deputies from the pro-Russian Opposition Platform – For Life (Oppozytsiyna Platforma – Za Zhyttia) in the Parliament hall at the moment of the vote. However, official results for the vote in the Verkhovna Rada showed that there were 20 votes in favor of Mr. Shkarlet’s appointment from members of the same party. The Verkhovna Rada’s Regulations Committee is expected to provide an official statement on the matter. Members of the Holos Party said that if the vote is not overturned by the Regulations Committee, then they will prepare a petition to the Constitutional Court to dispute the matter.