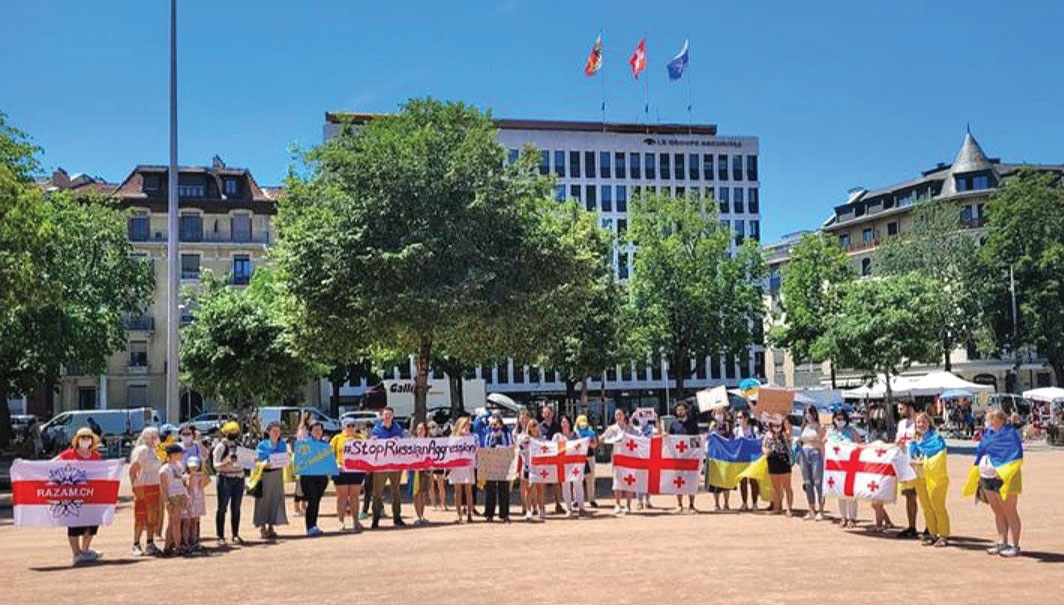 Presidents of the United States and Russia were met in Geneva on June 16 by a rally calling for an end to Russia’s war against Ukraine.

GENEVA – The presidents of the United States and Russia were met in Geneva on June 16 by a rally calling for an end to Russia’s war against Ukraine. Organized by the Ukrainian Society of Switzerland, the demonstration was part of a global campaign by the Ukrainian World Congress (UWC) aimed at raising awareness of Russia’s ongoing military and economic aggression against Ukraine. Activists held signs that read “Crimea is Ukraine” and others held a sign that included the hashtag #StopRussianAggression.

The Ukrainian Society of Switzerland, together with many UWC member organizations, has been disseminating information worldwide about Russia’s war against Ukraine. Since 2014, Russia has been responsible for the killing of 14,000 people, a quarter of whom were civilians, the downing of civilian airliner MH17 that killed almost 300 innocent civilians and a seven year war that has ravaged Ukraine, leaving more than 30,000 wounded and over 1.5 million internally displaced.

The UWC called upon U.S. President Joe Biden to take decisive action to restore Ukraine’s territorial integrity and end Russia’s war against Ukraine and its neighbors, including the de-occupation of Crimea and the regions of Donetsk and Luhansk oblasts occupied by the Russian Federation, as well as the withdrawal of Russian troops, mercenaries, and weapons from sovereign Ukrainian territory and from Ukrainian borders.

In a statement, the UWC said it welcomed Mr. Biden’s statement on June 16 reaffirming the United States’ unwavering commitment to the sovereignty and territorial integrity of Ukraine.

“Today the world needs President Biden to stand up to [Russian President Vladimir] Putin with conventional deterrence and real consequences for his occupation and ongoing wars in the region. Furthermore, projects such as Nord Stream 2, intended to destabilize Europe and control Ukraine, must be stopped. Russia’s imperial intentions regarding Ukraine are clear and the international community must not trust the president of this aggressor state,” UWC President Paul Grod said following the summit in Geneva.