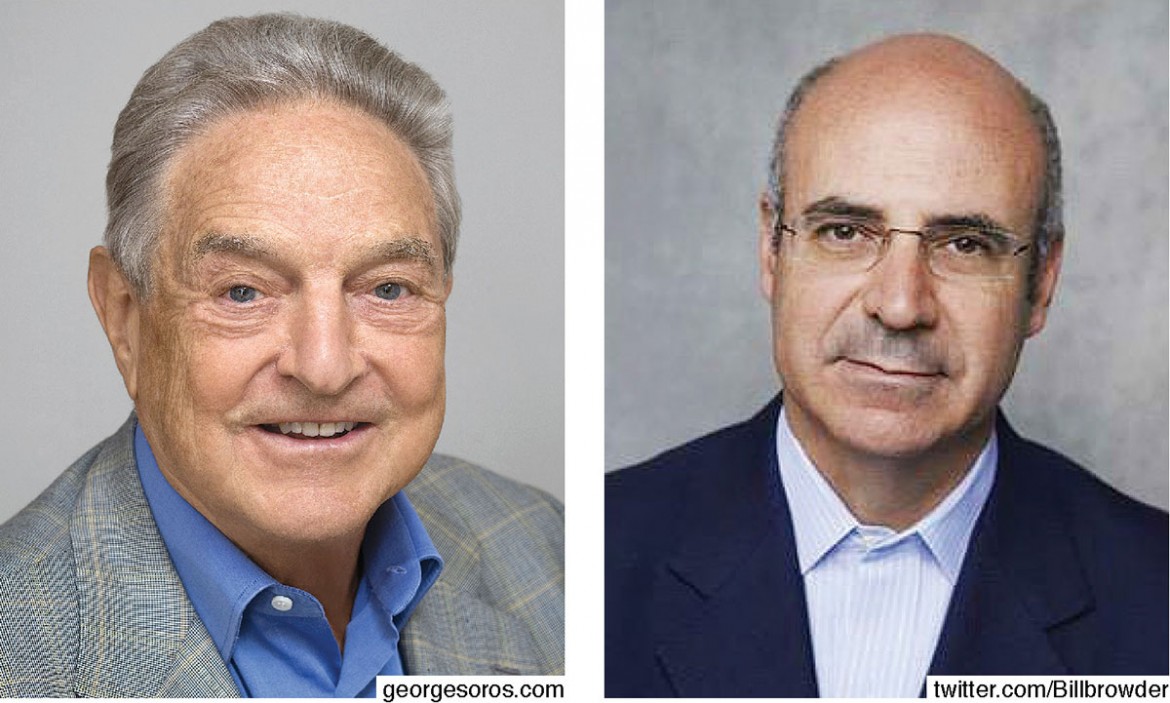 Billionaire philanthropist George Soros (left), a top financier of Western non-governmental organizations in former Soviet states, said Russia has enough international reserves to last only a couple of years. Bill Browder, co-founder of the Hermitage Capital Management, one of the biggest foreign investors in Russia before it was blacklisted and prosecuted by the Kremlin, said he gives “the Putin show” 18 months.

KYIV – When the West imposed economic sanctions on Russia for its military aggression against Ukraine, its leaders assured the public that they would accomplish their goals of restoring order and peace better than a military response would have.

Nearly two years later however, the Ukrainian public – forced to endure economic misery and possibly another military draft – is still anxiously waiting for the sanctions to force an end to the aggression. The latest forecasts that surfaced in recent weeks cite 2017 as the year when Vladimir Putin’s regime could begin to crumble.

“I think it’s very clear that Russia is in a very, very weak position. It has enough reserves that it can last a couple of years. There’s a big year for it in 2017, when a lot of debt comes due,” billionaire George Soros told Bloomberg News in an interview on January 21 during the Davos World Economic Forum.

Mr. Soros has been among the biggest enemies of Russian President Putin, being a top financier of non-governmental organizations in the former Soviet Union that promote Western integration.

He pointed out that the Russian government has to make many debt payments, while at the same time coping with plummeting oil prices that reduce revenue, Western economic sanctions that restrict access to loans and the need to reduce its own budget deficit, which entails cuts in social spending.

Russia’s 3 percent of GDP deficit in the 2016 budget will have to be financed by its dwindling gross international reserves, which amounted to about $360 billion as of the year end, Mr. Soros pointed out.

“That actually violates the social compact that has made him [President Putin] so popular, which is basically financial stability and a slow but steadily rising standard of living. He has to do something about it,” said Mr. Soros, referring to “the impending collapse of the Russian economy.”

The Russian government has been trying to negotiate the removal of Western sanctions in recent weeks in what Mr. Soros described as “a race against time.”

Among those involved in the talks were Mr. Putin’s most trusted advisers, including Boris Gryzlov and Vladislav Surkov.

U.S. Secretary of State John Kerry confirmed at Davos that the sanctions could be removed “with effort and with bona fide, legitimate intent to solve the problem on both sides.”

Yet no breakthrough has since been announced as Russian-backed terrorists continue to fire on Ukrainian positions and receive armaments from Russia, according to Ukrainian government reports.

Western leaders have even proposed compromises, such as transferring control of the occupied border to the Organization for Security and Cooperation in Europe instead of the Ukrainian government, to no avail. Meanwhile, Russia continues to deny the presence of its soldiers in the Donbas.

More optimistic about Mr. Putin’s demise is Bill Browder, a co-founder of the Hermitage Capital Management, which was one of the biggest foreign investors in Russia before it was blacklisted and criminally prosecuted by the Kremlin starting in 2005.

He gave “the Putin show” 18 months of survival, or until the end of 2017 at the latest, if the sanctions remain in place. Speaking to reporters at the Davos forum, he estimated Russia’s reserves to truly be $210 billion, instead of $360 billion, and said they’re quickly being burned through because of Western sanctions and dropping oil prices, which need to be at $70 a barrel to support the economy instead of the current price of about $30, as reported by the forbes.com news site.

The $360 billion figure “includes Ukraine’s $3 billion debt, for example, which it doesn’t want to return,” Mr. Browder said, according to Die Welt, a leading German newspaper. At the same time, Russian state and commercial debt amounts to $600 billion, he added.

Moreover, Russian Central Bank Chair Elvira Nabiullina said on January 20 that its policy remains not to use reserves to prop up the falling ruble, which continued to hit record lows this week. Her absence from the Davos forum buttressed the views of political and business elites that Russia has little time left, as reported by Die Welt.

“They just don’t have the money to support the ruble, and so Russians are just suffering,” Mr. Browder said in a January 21 interview with CNBC from Davos. “Eventually, they’re going to run out of that money and, when they do, that’s when the real trouble begins.”