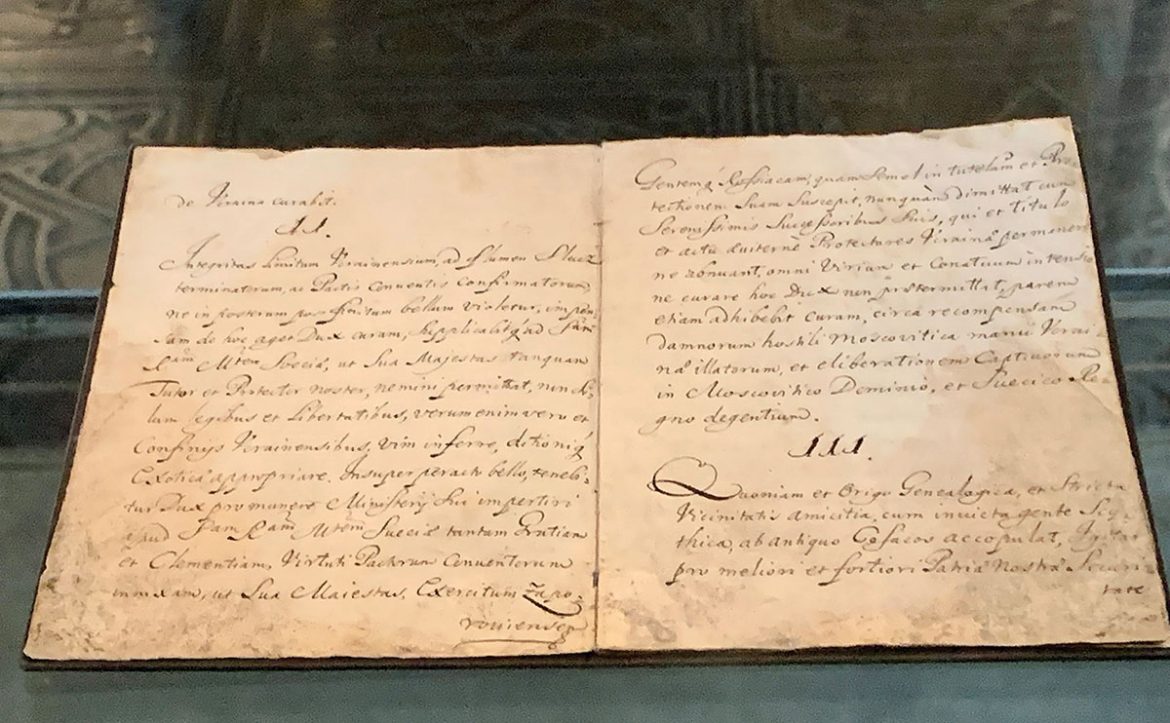 One of the original copies of the Latin-language version of Ukrainian kozak leader Pylyp Orlyk’s 1710 constitution on display at the 1,000-year-old Saint Sophia Cathedral in Kyiv on August 17.

One of the original copies of the Latin-language version of Ukrainian kozak leader Pylyp Orlyk’s 1710 constitution on display at the 1,000-year-old Saint Sophia Cathedral in Kyiv on August 17.

Seen for the first time here since it was first authored 311 years ago, it is approximately 15 centimeters (5.9 inches) long and 10 centimeters (3.9 inches) wide.

Written in 1710, it predates the U.S. Constitution by more than six decades, yet its wording is democratic in breadth and content. It reflects the same democratic manner by which Orlyk was elected hetman by the kozak leadership’s seniority on April 5, 1710, while in exile near the town of Tiahynia on the right bank of the Dnister River.

The document established the principle of the separation of powers between the judicial, legislative and executive branches of government. It also established a kozak parliament and limited the executive authority of the hetman. It was penned almost four decades before Montesquieu’s “Spirit of the Laws,” a famed work of democratic political theory published in 1748.

Written in Latin – the lingua franca of the time used throughout Europe for legal documentation – it is on loan from the National Archives of Sweden until November 14.

It was brought to Ukraine for the upcoming 30th Independence Day celebration that will officially begin later this month. The original constitution, written in Old Ukrainian and signed by Orlyk, was discovered in 2008 by Ukrainian researchers in the Russian State Archive of Ancient Acts in Moscow. That document remains in the Russian capital.

Orlyk’s Constitution “essentially announced Ukraine’s independence from Poland and Russia” at the time, according to Olha Vovk, head of the artifacts department at the State Historical Archives of Ukraine.

The Constitution comprises a preamble and 16 articles. The legal document “substantiated the rights of Ukraine to sovereignty from Moscow and Poland,” Ms. Vovk wrote.

It stipulated Orthodox Christianity “as the main religion” on Ukrainian territory, which would be “subordinated to the Patriarch of Constantinople, not Moscow,” she added.

It also established the Ukrainian-Kozak state’s “borders of the heyday of the Hetmanate and regulated external and internal socio-political and economic relations of the hetman with the officers and ordinary kozaks, establishing an institution like the kozak parliament in which not only the general and regimental sergeant were involved, but also the Sich [kozak base],” Ms. Vovk wrote.

The Constitution arrived in Ukraine from Sweden on August 11, the Ukrainian Customs Service announced. It came with other historical artifacts, such as a battle mace, or bulava as it is known in Ukrainian, with which Ukrainian kozak leaders were armed.

The mace “probably” belonged to both or either Hetman Mazepa and Orlyk, according to Johanna Fries Markiewicz, head of conservation at the National Archives of Sweden, who spoke to The Ukrainian Weekly over the phone.

She said experts are uncertain about the possession of the mace because “it doesn’t have the provenance…but it appears in paintings of Mazepa and the mace sent to Ukraine looks like this one.”

The shipment from Sweden was personally overseen by Serhiy Silyuk, head of the Kyiv branch of the Customs Service, who ensured its safe and expedited arrival on President Volodymyr Zelenskyy’s orders. The Culture Ministry, in turn, organized an exhibition at the St. Sophia Cathedral, now a museum, ahead of Ukraine’s Indepen­dence Day on August 24.

The price of entry to the cathedral is 125 hryvnias ($4.69), according to the official currency rate on August 18.

Ms. Markiewicz also added that the original copy of Orlyk’s Latin version of the Constitution ended up in Sweden either because Swedish King Karl XII took it with him when he was exiled with the kozaks or it was sent to him.

Stockholm decided to send the Constitu­tion and mace and other items “once we were sure that the proper measures needed about security and climate of lending for showcasing them were going to be secured during the entire process,” Ms. Markiewicz added. “We also understand how important it is for Ukraine [for their Independence Day celebrations] and tried to make it possible.”

After a combined force of kozaks aligned with Mazepa and Karl XII lost the Battle of Poltava in 1709 against Russian Tsar Peter’s army, Orlyk fled together with his superior and the Swedish monarch to Bender in what is today Transnistria, a Russia-occupied region of Moldova.

The battlefield loss marked the decline of Sweden’s dominance in Eastern Europe and Russia’s rise as a growing empire.

The following year, “the Zaporozhian Army, after long disputes, elected” the self-exiled Orlyk as hetman on April 16, 1710, after which he penned the Constitution.

It named Karl XII as a “protectorate” of the Ukrainian-Kozak state and was confirmed by a diploma the Swedish king had delivered to the kozak leadership. Orlyk would prolong his exile in Sweden where he joined the monarch in 1715, Ms. Markiewicz said.

Born in Vilnius in what is today Lithuania, Orlyk completed studies at the Kyiv Mohyla Academy in 1694, according to the Internet Encyclopedia of Ukraine.

He was appointed as Mazepa’s chief aide in 1706, the publication says, and “facilitated Mazepa’s secret correspondence with the Poles and Swedes, and assisted Mazepa in his effort to form an anti-Russian coalition in Eastern Europe.”

Orlyk continued these efforts as hetman and held negotiations or formed alliances with the Crimean Khanate “and Don Cossack participants in Kondratii Bulvani’s revolt, who had fled to the Kuban and even contacted the Kazan Tatars and Bashkirs,” the encyclopedia says.

After spending time in Sweden, he would go on to live in Turkish-controlled territories and finally in Moldova. He eventually failed to “incite the Zaporizhian Host to rise against Russian rule” and died in Romania in 1742.