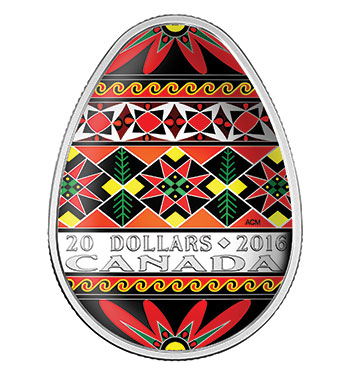 The new coin released by the Royal Canadian Mint.

WINNIPEG, Manitoba – It sold out in a day – even before it was announced to the general public – and the buzz on social media is still going on.

On January 27, the Royal Canadian Mint announced an “Advance Product Notice” of new coin releases to preferred Masters Club Members. These are the coin collectors who spend much more than the average numismatist on the special fine Canadian coin releases. In the middle of the long e-mail announcement of pure silver and gold coins commemorating Haida Art, the tundra swan, a bright green four-leaf clover for St. Patrick’s Day and Reflections of Wildlife (bears) was this spectacular image of a full-color pysanka. It was a 99.99 percent silver egg-shaped coin of a Hutsul pysanka, with the obligatory Queen Elizabeth (not in color) on the verso. One of the bands in the pysanka design is embossed in the silver: “20 DOLLARS 2016 CANADA.” The selling price: $114.95 Can.

This is the text of the press release, which included images of the coin:

“2016 $20 Fine Silver Coin – Traditional Ukrainian Pysanka.  With its handcrafted beauty, rich symbolism and colorful patterns, the pysanka egg is one of the beloved forms of traditional Ukrainian folk art, and a unique celebration of spring! On the 125th anniversary of Ukrainian settlement in Canada, the Royal Canadian Mint celebrates this time-honored Easter tradition and the awe-inspiring artistry behind each masterpiece.  Launch date:  February 2, 2016.

• Unique opportunity to own the FIRST-EVER egg-shaped coin issued by the Royal Canadian Mint;

• Vibrant color throughout the elaborate design recreates the breathtaking hand-crafted artistry of a Ukrainian Easter egg;

• A cultural celebration of a beloved Ukrainian tradition on the 125th anniversary of Ukrainian settlement in Canada;

• The coin’s shape is itself powerfully symbolic as many cultures consider the egg to represent life and rebirth, which is often associated with spring;

• A deeply meaningful and visually stunning gift to celebrate Easter, spring birthdays, or any special occasion;

• A wonderful way to add a year-round reminder of spring to your collection!”

The release continued with an explanation of the symbolism of the pysanka and its colors. 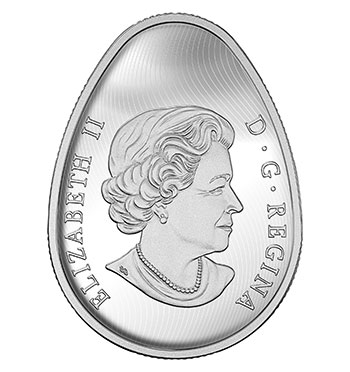 The reverse of the pysanka coin bears an image of Queen Elizabeth.

While this Canadian coin is the first egg-shaped and color pysanka coin in the world, Ukraine had produced two pysanka-themed coins in the traditional round form: a 5 hrv (copper-nickel) and a 20 hrv (silver) in 2009.

The day the advance notice came out via e-mail and in the serial catalogue “Coins from the Royal Canadian Mint,” numerous dealers and speculators began advertising on eBay and Kijiji. They had ordered immediately, and were taking pre-orders (although they had not yet received the actual coins). Within hours, the bidding began and, a day before launch, the bids were up to $200. Two weeks later, the bidding was up to $300 on some sites.

Alexandre Reeves, senior manager for communications, Royal Canadian Mint, explained that “in general, coins take between one and two years to go from idea to production. We began work on the project about 12 months ago, which would mean it was on the radar six to 12 months prior to that development. We are always looking for new Canadian artists to work with, and we came across Ann Morash on the web while researching pysanky.”

A side view of the pysanka coin.

Ms. Morash has been writing pysanky since the age of 3 or 4.  She was born and raised in Dartmouth, just outside of Halifax, Nova Scotia, on the east coast of Canada.  Her family arrived in Canada sometime in the early 1920s. Her grandfather worked in the steel mill in Sydney, Cape Breton. Ms. Morash’s uncle, John Huk, edited “Strangers in the Land: the Ukrainian Presence in Cape Breton” (Sydney, Nova Scotia: Center for Cape Breton Studies, Cape Breton University, 2011). She enjoys the cultural aspects of her heritage, including Ukrainian dance, embroidery and cooking.

But it is pysanky that she loves most. For the final project for her IT diploma, Ms. Morash created what would later become www.LearnPysanky.com, a comprehensive website where people can learn how to create their own pysanky at home, start to finish, with free designs provided.  This has expanded over 20 years to include information on where to buy supplies, take workshops in person, and about Ukrainian recipes.

Ms. Morash said that “I wanted to make the design as authentic and traditional as I could, while also having a little leeway for artistic expression. I submitted several designs, and the one that was chosen was created into this lovely coin. I’m tremendously honored to be chosen to represent my heritage in this way.”

CORRESPONDENT’S NOTE: We ordered our coins immediately.  I began outlining the article for The Ukrainian Weekly about this unprecedented event, and contacted Alexandre Reeves, asking for more information about how this project began.  During this time, I vaguely remembered that long ago I had written to the Mint with a suggestion about just such a coin.

On August 11, 2014, I had written: “In 2016 Ukrainian Canadians will be celebrating the 125th Anniversary of Ukrainian settlement in Canada. I’m sure you are aware of the major contributions this community has contributed to Canada. I was thinking that a commemorative coin for this anniversary would be most appropriate. My husband is a regular customer of the Royal Mint’s beautiful commemorative coins, and I thought that a Ukrainian-themed coin would definitely be memorable, as well as a best-seller internationally as well as nationally. Just think of a pysanka – a Ukrainian Easter egg on a loonie or toonie. If a pysanka design were to be chosen, it would have to be from western Ukraine, from which the first immigrants came.  There are very many regional designs.” I received an acknowledgement at the time.

Mr. Reeves acknowledged my question about my e-mail, but cautiously replied:  “We get ideas from many places and, though we did hear from you in regards to this commemoration, it’s quite possible there were other suggestions received in that time frame. Still, there is no harm in pointing out that you made the suggestion to the Mint as long as you don’t claim sole ownership of the idea.”  (I certainly had not planned to do that at all, but was pleased that this came to fruition, especially in a silver $20 coin, and not a “loonie,” $1, or a “toonie,” $2 coin. Canada no longer has paper currency for these values.)  It would be good to hear from others who had written. Readers may contact me at orysia.tracz@gmail.com.

I am now anxiously awaiting the delivery of my own silver pysanka coin.