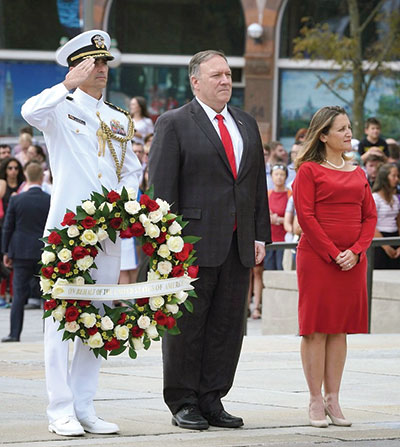 U.S. Secretary of State Mike Pompeo and Canadian Foreign Affairs Minister Chrystia Freeland pay tribute at the National War Memorial in Ottawa to the Canadian women and men who served alongside American allies and friends.

“On Russia and the G-7, that is an issue that Canada has a very clear position on and that I personally have a very clear position on. Early in my career as a journalist, I lived and worked in Moscow – in Moscow at a time when Russia was building a democracy and a market economy. And it was entirely appropriate as part of that process to admit Russia to the G-7. That was the G-7 community of nations extending a hand to a democratizing, reforming Russia and saying the doors are open to you to join this important, I would say essential, group of likeminded nations.

“And then Russia grossly violated international law by invading and annexing Crimea and added to that with the continued war in the Donbas. This was an incredibly serious step. It is the first annexation of territory of a European country by another European country since the second world war. And when you think about the carnage of the second world war – and we referred today to the work our countries did after the second world war to build a rules-based international order to make sure that couldn’t happen again. Russia’s violation of international law in invading Crimea and annexing it, in continuing to support war in the Donbas, is something we cannot allow to stand, and that is why Russia was expelled from the G-7, because of that action. So I think all of us would be delighted to welcome a Russia which sought again to be a member in good standing of our like-minded group of countries, a group of countries committed to the rule of law, a group of countries committed to democracy. And the way for Russia to show that it wants to do that is to leave Crimea and to end the war in the Donbas. It’s very simple.”

– Canadian Foreign Affairs Minister Chrystia Freeland responding to question about whether she supports U.S. President Donald Trump’s suggestion that Russian should be readmitted to the Group of Seven. The exchange took place during a press availability with U.S. Secretary of State Mike Pompeo on August 22 in Ottawa.