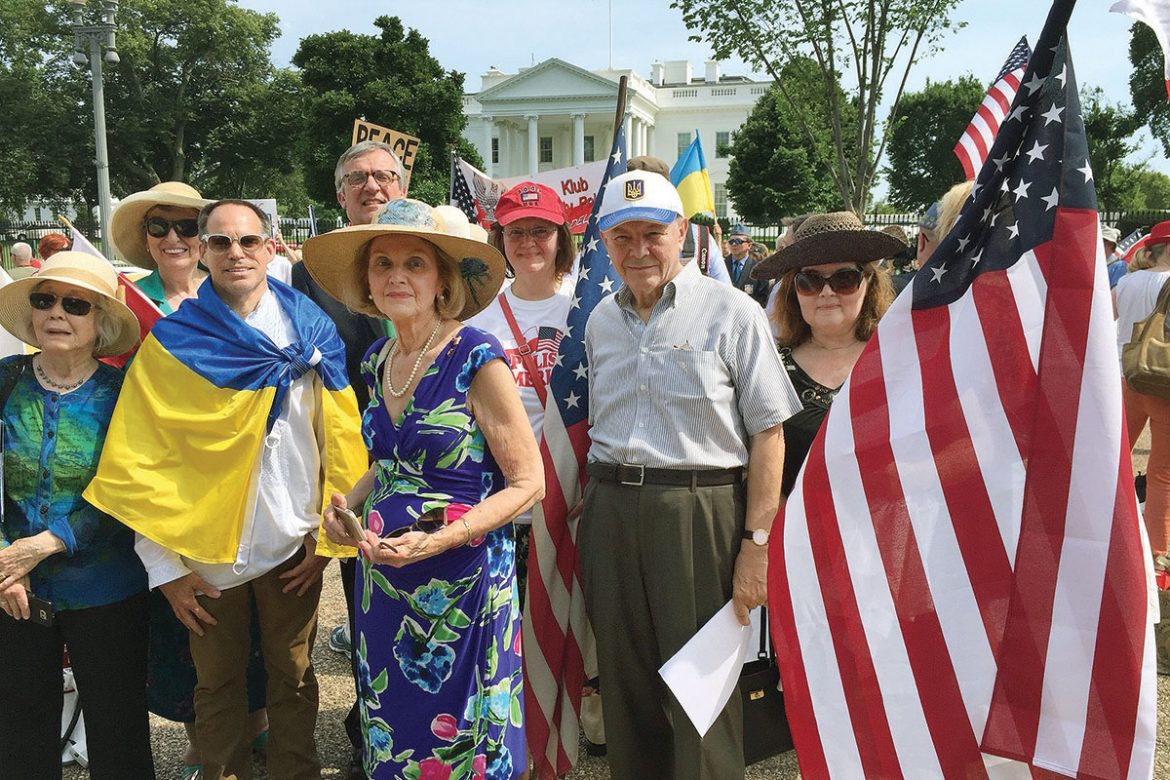 Participants of the rally included (from left): Inci Bowman, president of the International Committee for Crimea; Michael Sawkiw Jr., director of the Ukrainian National Information Service; Dr. Susan Lotarski, president of the Washington metropolitan division of the Polish American Congress; and Jaroslaw Martyniuk, a former researcher with Radio Liberty.

WASHINGTON – Polish Americans and others rallied in front of the White House on Saturday, June 11, demanding the presence of U.S. military in Poland and strengthening NATO defensive capability in the region.

The rally, organized by Federation of Polish Americans Inc. and the Polish American Congress, aimed to bring attention to the real threat Russia poses to Poland and to world peace. Rally participants urged President Barack Obama and his negotiating team at the upcoming NATO summit in Summit, to persuade NATO allies to deploy substantial NATO armed forces assets in Poland and the Baltic states to dissuade Russian aggression.

Mr. Sawkiw reaffirmed the need for NATO troops to be stationed in Poland and the Baltic states in order to deter Russian aggression. “It is vital for Eastern European communities to unify their efforts to ensure that Russian aggression is brought to an end,” he noted. “NATO has the capacity to assist members and non-member states to protect their territorial integrity, sovereignty and independence.”

Mr. Sawkiw also stated that, “as Ukraine and Georgia were mentioned in the 2008 NATO Bucharest summit communiqué, it is the role of our communities to be vigilant with our elected officials and urge them to support the open door policy.”

Mr. Martyniuk spoke at length, pointing out that the lack of resolve and decisive action only encourages Russia’s belligerent behavior. Addressing President Barack Obama, he said: “Mr. President, we live in extremely perilous times. The threat to world stability and peace is greater today than during the Cold War. …The Russian president correctly perceived that you, Mr. President, the leader of the Western World, have been unwilling to take serious measures to confront him. Your refusal to sign off on delivery of lethal defensive weaponry such as the Javelin to Ukraine – despite strong backing of the Pentagon and State Department – was interpreted by Mr. Putin that you are weak and unwilling to stand up to his bullying.”

He added that now Vladimir Putin is getting ready to test Western resolve in the Baltics, Poland and again in Ukraine. “We see evidence of Putin’s nefarious intentions in Russia’s military build-up from Kaliningrad to the Donbas, as well as aggressive provocations to intimidate Russia’s neighbors from the Baltic to the Black Sea littoral.” Mr. Martyniuk cited the Russian armed forces’ “Zapad” war games, Russia’s hybrid warfare and cyberattacks, and the Russian propaganda machine that sows disinformation.

“We see how Putin is dismantling, step by step, the basic security architecture of post–World War II Europe, and the West is doing little to stop it, Mr. Martyniuk underscored.