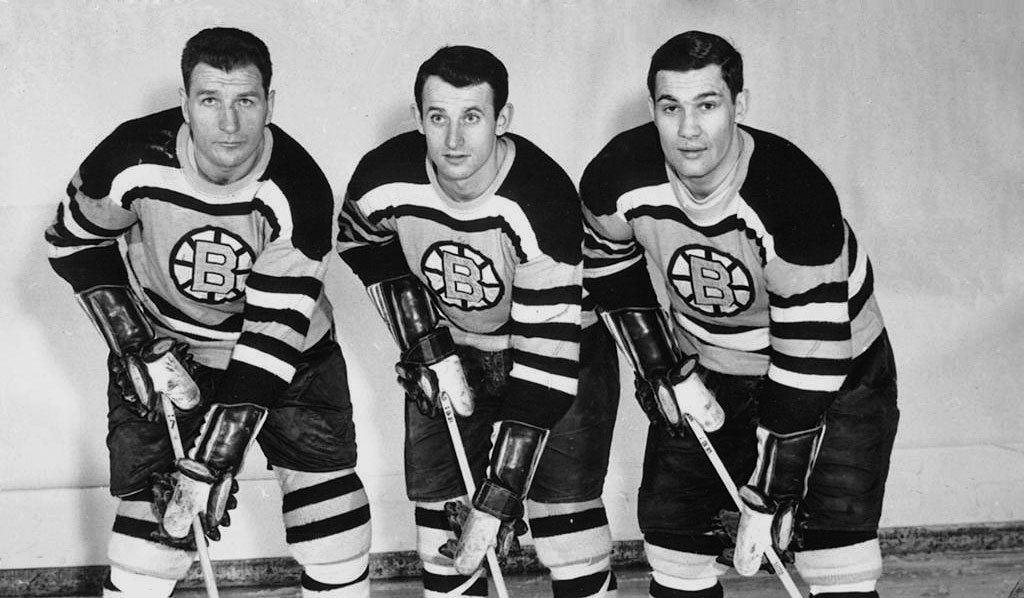 The “Uke Line” of the Boston Bruins in the 1950s: Vic Stasiuk, Bronco Horvath and Johnny Bucyk.

The “Uke Line” of the Boston Bruins, formed in 1957, comprised Johnny Bucyk, Bronco Horvath and Vic Stasiuk, three forwards of Ukrainian heritage. The three actually got started in the Western Hockey League, where the trio skated together for the Edmonton Flyers in 1954-1955, although Stasiuk only got into 11 games (13 points), while Bucyk (30G, 88PTS) and Horvath (50G, 60A, 110PTS) killed it offensively.

The line’s offensive production in Boston over four seasons was solid – the Ukrainians scored 265 goals and 632 points, averaging 66 goals and 158 points per season. Their peak year was 1959-1960 with the three combining for 84 goals and 200 points. By their fourth year, the unit’s scoring totals dropped to 99 points and personnel changes were imminent.

Bronco Joseph Horvath had the unique distinction of at one time or another being the property of all original six teams. Signed first by the Detroit Red Wings, he was traded to the New York Rangers without playing a single game in Detroit. After one season he was shopped to Montreal where he dressed for one game. The next off-season saw Horvath traded to Boston where he blossomed as an NHL-er, playing on the “Uke Line,” centering Johnny Bucyk on the left and Vic Stasiuk on the right. The threesome formed one of hockey’s most electrifying forward lines, playing together from 1957 through 1961.

His first season with the Bruins saw Horvath score 30 goals and 66 points in 67 games, leading Boston in scoring. The line’s offensive success catapulted the Bruins to the Stanley Cup finals against Montreal, ultimately a losing effort. Season No. 2 was interrupted by a broken jaw, limiting him to 19 goals in 45 games. The next season Bronco tied Bobby Hull for the league lead with 39 goals. He finished second in overall league scoring with 80 points, one point shy of top scorer Hull. He was named to the NHL second all-star team at center, behind Canadiens immortal Jean Beliveau. Horvath jelled on the line with his fellow Ukrainians, all three were adept at setting their line mates up for easy markers or sniping pucks into opposing nets.

The “Uke Line” was broken up the following year, mainly due to injuries. Horvath struggled through another injury-plagued season in Boston, playing in only 47 games, scoring 15 goals and 30 points. He was claimed by Chicago in the intra-league draft, but the remainder of his career was mostly spent in the American Hockey League after stints in Chicago, New York and Toronto.

Bronco Horvath was inducted into the Ukrainian Sports Hall of Fame in 2019.
Coming out of junior hockey, Vic Stasiuk signed with the Chicago Black Hawks where he played sparingly (37 games in two seasons) and then was traded to the Detroit Red Wings in 1951. He won three Stanley Cups while with Detroit, although in 1954, because he spent the playoffs in the minors, his name was left off the Stanley Cup after the Wings captured the league crown.

In 1955 Stasiuk was dealt to the Boston Bruins and re-found on-ice chemistry with Johnny Bucyk and Bronco Horvath on the “Uke Line.” In 1957-58, this forward unit became the first in NHL history to have all three players reach the 20-goal mark. Stasiuk tallied 20 plus goals in four consecutive seasons (three with the “Uke Line”), peaking with a career high in points (68) in 1959-1960. In 1961 he was traded back to Detroit where he played until 1963, before finishing his career in the minors.

After retiring Stasiuk moved into the coaching ranks, first in the AHL with the Pittsburgh Hornets and Quebec Aces, and later with the Eastern Hockey League’s Jersey Devils. In 1969-1970 he earned the head coaching position of the Philadelphia Flyers, which lasted two seasons. He went on to coach the California Golden Seals and Vancouver Canucks, each for one season.

Vic Stasiuk was inducted into the Ukrainian Sports Hall of Fame in 2018.
Whereas Bronco Horvath and Vic Stasiuk could be characterized as journeymen hockey players, the same distinction could never apply to Ukrainian Johnny Bucyk. Once he arrived in Boston, he never left, becoming a career Bruin in so many different ways.

After two seasons with hometown Edmonton of the Western Hockey League, Bucyk graduated to the NHL’s Detroit Red Wings in 1955, but couldn’t dent the powerful Red Wings lineup and was traded to Boston in exchange for fellow-Ukrainian goaltender Terry Sawchuk. Being dealt for the greatest goalie ever brought some pressure on the young Bucyk, who readily accepted the challenge with his new club and proceeded to star for the next 21 years, rewriting their record book on the way to becoming one of their all-time greats.

He received lots of ice time at the outset, stepping in as the third member of the “Uke Line,” joining his former junior teammates Horvath and Stasiuk. His inaugural year in Boston saw the “Chief” tally 21 goals and 52 points, on his way to 545 career goals, 794 assists, 1,339 points in 1,436 games. The long time Bruins captain retired as the Bruins all-time leader in games played, goals and points, subsequently passed in games and points by Ray Bourque.

Bucyk was a finesse player, yet tough as nails, a heavy body checker especially noted for his devastating hipchecks. Despite his aggressive physical play, he was a clean player as evidenced by his two Lady Bing trophies as the NHL’s most gentlemanly player. After hanging up his skates, Bucyk served as a broadcaster, in the front office, director of road services and team ambassador.

He recorded 16 20-goal seasons, was a First Team All-Star in 1971, played in seven All-Star games and won two Stanley Cups.

Bucyk’s No. 9 jersey was retired by the Boston Bruins in 1978. He was inducted into the Hockey Hall of Fame in 1981 and into the Ukrainian Sports Hall of Fame in 2017.
The following are direct quotations about his line-mates from Bucyk’s book, “Hockey in My Blood”:

“One of the best lines I played on was with Vic Stasiuk and Bronco Horvath. They called it the ‘Uke Line’ because of our Ukrainian descent. I first met Vic in Edmonton; he was with the Flyers and I was with the Oil Kings. I watched Vic quite a bit and admired him from the first time we met. Vic is what you call an honest hockey player. Vic was the type who worked hard all day. He’d skate up and down that right wing side until he was blue in the face. He’d forecheck, backcheck, do everything, just totally dedicated to hockey.

“I first met Bronco Horvath in the Detroit Red Wings’ training camp, my first camp before turning pro with the Edmonton Flyers. Right off the bat they put Bronco and Vic together with me and we seemed to click pretty well. We played the entire 1954-55 season at Edmonton together.