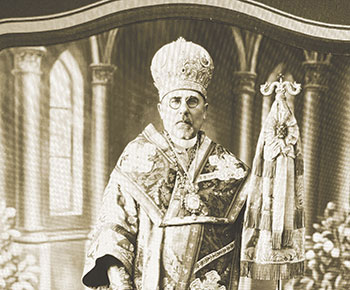 Below is an excerpt from the article “50th Anniversary of Repose of Metro­politan John” by Metropolitan Antony of the Ukrainian Orthodox Church of the U.S.A. from the May 2021 issue of the UOL Bulletin (Vol. 67, No. 6). Metro­politan John died on May 3, 1971, marking 50 years since his repose. The entirety of the article can be viewed on the UOC-U.S.A. website, www.uocofusa.org. 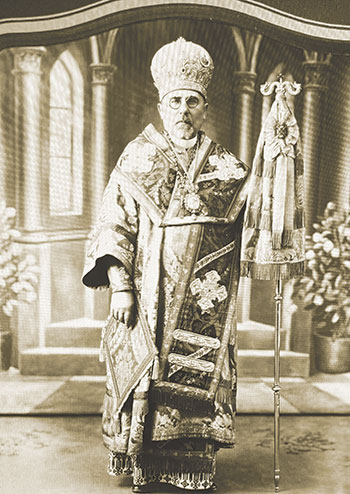 “On the third of May 1971, the First Primate of our Church of the U.S.A., His Beatitude, John, Archbishop of Phila­delphia and Metropolitan of the Ukrainian Orthodox Church of North and South America, fell asleep in the Lord.

Metropolitan John (Ioan Theo­doro­vych) was born in the town of Krupets, Ukraine, on October 6, 1887. Here his father served as a priest and others of his ancestry also served the church. Here in this community, he began his studies and later entered the Seminary Preparatory school in the city of Klevan. Upon graduation there, he enrolled in the Zhytomyr Theological Seminary, from which he graduated with high honors. Following graduation, he continued his studies and received his teacher’s certificate, which he utilized by teaching for five years in the schools of the Dubno and Ostroh Districts. It was during this time that he married. He was ordained a Deacon, in 1914, and as a priest on May 10, 1915. This was during World War I and, tragically, Fr. John’s wife suddenly reposed in August of 1915. He served as a Chaplain and later was assigned to a parish in Mitintsi, in the district of Starokostan­tiniv. Later, during one of the Sobors he became one of three candidates who were elected to become Bishops of the Ukrainian Autocephalous Orthodox Church. And so, he was consecrated Bishop by the Metropolitan of All-Ukraine, Wasyl Lipkiwsky and Archbi­shop Nestor Sharaysky on October 26, 1921.

At this time, he became the Bishop of the Podil’ska Eparchy.

The Ukrainian Orthodox Church in the USA had its beginnings in 1915, when it was decided that the Orthodox Ukrainian American population had reached significant enough numbers as a distinctive ethnic group and it should have its own jurisdiction.

Eventually, in 1918, the group sought and received spiritual protection under the omophor of Bishop Germanos (Shehadi) of the Syrian Orthodox Church. Bishop Germanos provided the necessary guidance for the new jurisdiction until the need for its own Bishop became obvious to all. The jurisdiction requested the appointment of one from the Autoce­phalous Church. Because of his proven exceptional organizational and administrative skills, Bishop John was elevated to the rank of Archbishop and assigned by the All-Ukrainian Church Council to Archpastoral duties in the U.S.A. Archbishop John arrived in the United States in 1924 and immediately called for a Sobor, which would formalize the establishment of the Archdiocese as the American-Ukrainian Orthodox Church of the USA. This Sobor elected Archbishop John as its first Primate.

Bishop Germanos officially relinquished his authority over the Church to Archbishop John. Following the Sobor, under the guidance of Archbishop John, the life of the American-Ukrainian Orthodox Church of the USA truly began to blossom.

It was a great tragedy that struck the life of our Church in that May of 1971 with the repose of His Beatitude Metropolitan John Theodorovich, our prime hierarch from 1924 through 1971 – 47 years of love and closeness to the children of the Church.”