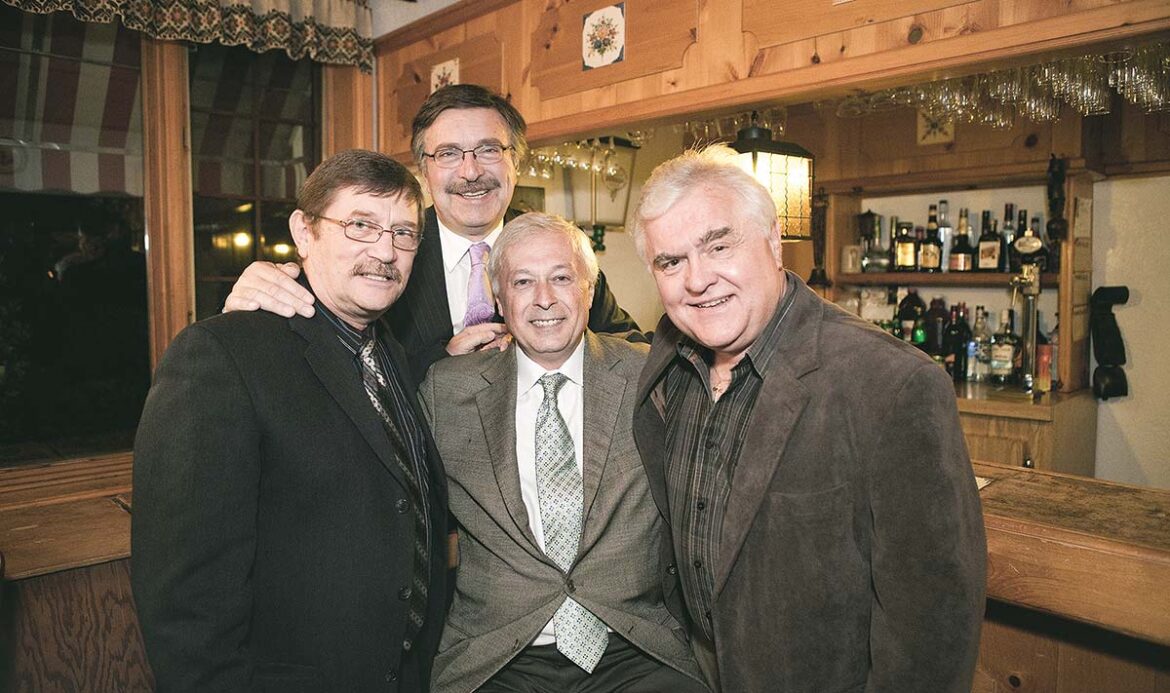 The members of the popular Ukrainian Canadian band Rushnychok met for the first time in 1969 at the intersection of Fairmount and Hutchison streets in Montreal. The Ukrainian National Federa­tion hall is still a stately landmark on the northeast corner. From that starting point, Rushnychok would travel to where old-world memories intersected with the demands of a new generation. It was at a time when fierce loyalties forged by the hammer of loss on the anvil of war encountered a flower-waving youth searching for love and peace. Our success would lie in appealing to both sets of travelers and dancing them across the divide.

My father, Mykola, had invested with 14 others to build a Montreal restaurant and reception hall called La Steppe. He asked me one fall day if I would ask some of my friends to play at La Steppe’s inaugural New Year’s party.

I played drums at weddings with Andrij Harasymowycz on guitar, and his older brother Youra on accordion. Occasionally, my friend Yourko Sztyk would also sit in; he would play guitar in our little band on off-date nights (later he played bass guitar with Rushnychok). Then, one night, Youra announced he would be stowing his accordion to study dentistry.

I’d heard that Ewhen Osidacz played accordion, and that he had a beautiful tenor. Ewhen was president of our university student arts association at Loyola of Montreal (which was affiliated with the University of Montreal). One noon hour, friends were playing broomball over at the sports complex, and I knew that Ewhen was their goalie. I watched him from the stands. After the game, I introduced myself and made my pitch.

A week or so later, four of us arrived at the UNF hall at the agreed-upon hour.

We all remember playing that New Year’s Eve. As night approached morning, the crowd wouldn’t leave. The hall manager, Mykola Petrashko, at first motioned to extend our sets. The applause seemed unending. Ewhen remembers having exhausted our songs and repeating them, adding, “I don’t think anyone noticed.” The revelers cheered: “More, more, more!” No one wanted it to end. Finally, Mr. Petrashko turned off the electricity to our amplifiers. That night, as 1969 welcomed the next decade, we sensed that we would play again soon, and often.

Rushnychok wasn’t the first band to be called “the Ukrainian Beatles.” In 1965 the D-Drifters produced an album, which included Ukrainian-language covers of songs from the British music invasion. The Lennon-McCartney early composition “Please, Please Me” and a ballad called “From Me to You” were both on the Winnipeg band’s album called “The D-Drifters 5 Sing and Play Beatles Songs.”

Back then, any male adolescent with long hair could incur the good-natured greeting “Hey, Beatles. “My mother would regularly call me “beetels.” One morning after I had repeatedly refused to get a haircut, she snuck up on me with her sewing scissors. While I slept, she cut an enormous handful of my locks with no particular styling plan. I awoke to see her beaming. Grabbing a hat, I walked to the barbershop.

In those days “zabava”(dance) bands wore white shirts and suits on stage. They sat and played from music sheets, delivered old standards and pretty much kept to themselves. Our fans associated us with the Beatles because, like the Fab Four, we played our own compositions. We wore tailor-made Ukrainian-themed attire. We projected a unified look.

When we played traditional songs, we delivered them in three-part harmony and injected them with new rhythms and rock overtones. Our repertoire enthusiastically embraced traditional sentiments and contemporary life here and now. Here in Ukrainian, now in the 1970s, like the Beatles, we were game-changers.

Zenon Snylyk was a famous member of the U.S. Olympic soccer team in his youth who became the long-serving editor of The Ukrainian Weekly and, after that, Svoboda. It was at the Ukrainian National Association’s upstate New York estate, Soyuzivka, in 1973 that he proclaimed Rushnychok to be “a happening.” Ukrainians from all over America and Canada came to soak in the sun, to dance beneath the stars and to live the Ukrainian experience. 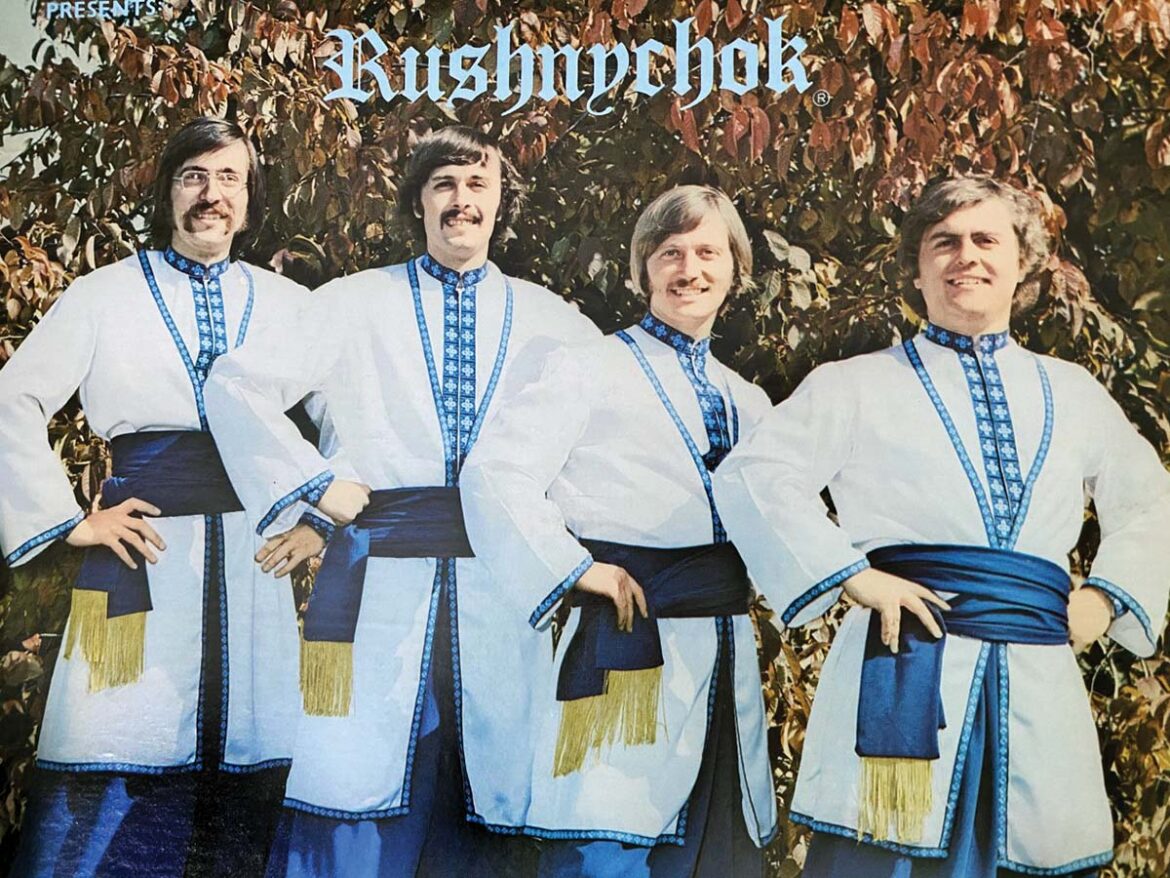 The cover of the Ukrainian Canadian band’s first album, “Rushnychok Vol. 1,” released in 1973.

Rushnychok, of course, would source and showcase many beloved Ukrainian traditional ballads. There were songs about love lost (“Кого любила тяшко забути”) or about a mother’s advice to her love-struck daughter (“Сама такая була”).

Also, at the core of our repertoire stood songs of valiant fighters for Ukraine’s freedom. “An Evening in May” (Маєва Нічка) was a tender lullaby dedicated to the Ukrainian Sich Riflemen, who fought in the first world war and on other fronts; among them was Yourko’s father, Frans Josef. Another was the ballad of Yurii Tiutiunnyk, which was a centerpiece in the Ukrainian Bandurist Chorus’s magnificent concerts.

Andrij Harasymowycz, Ewhen Osidasz and Yourko Sztyk, individually and in combination, wrote a dozen original songs. Theirs were loving and sensual lyrics at a time when traditional mores masked feelings of more intimate affection (“Зрозуміть не можу досі”), or made fun, as every culture does, of the bonds of matrimony (“Оженився, ой біда!”).

Yourko remembers that, “Throughout our musical career, we were blessed with many good friends and people who wanted to help. One such person was Borys Budny. He is an accomplished playwright, as well as a poet. From time to time, Borys would send us some of his poems, and any one of us would try to put them to music. A number of these collaborations worked out very well, and resulted in memorable songs.” 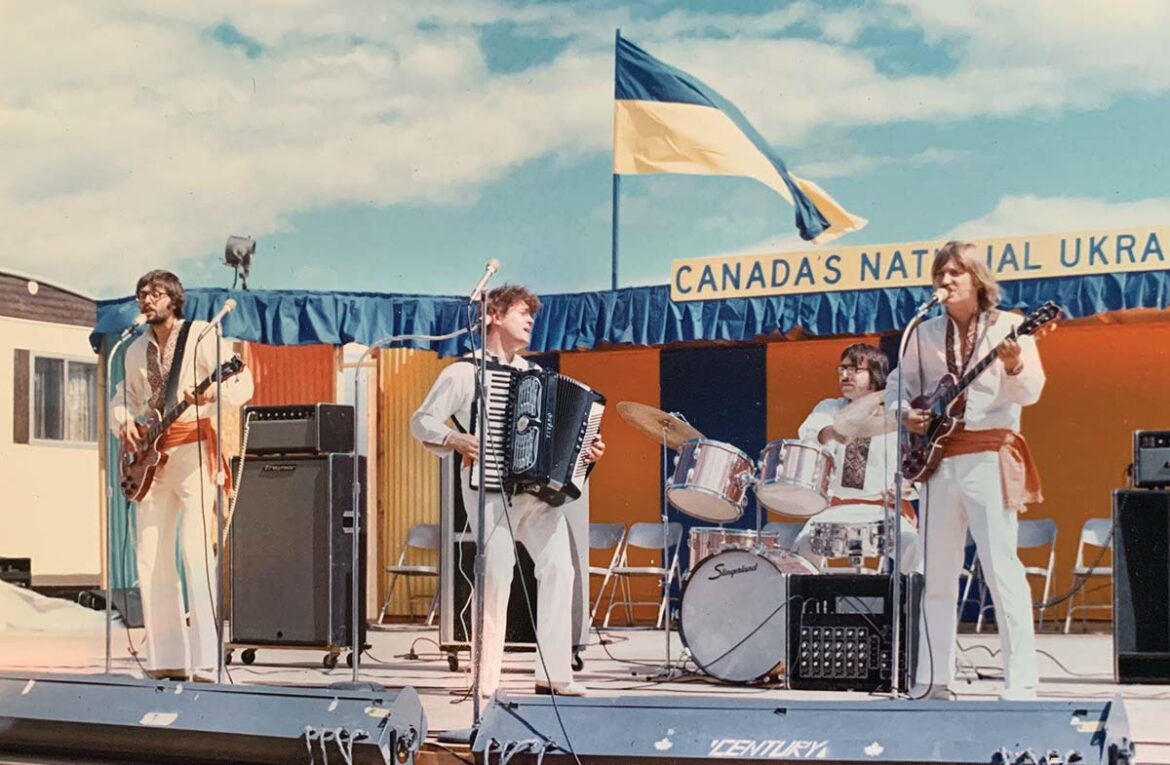 Here’s why I believe each one is memorable.

One of the most rewarding aspects of being a member of Rushnychok was the open-mindedness of the other members when it came to trying new songs, says Yourko. “Andrij, Ewhen and I would occasionally present a new song to the group, one that we had recently composed. We always received a positive reaction, helpful hints to improve it and assurances that it would be included in the next album. This encouraged our creativity and resulted in some memorable songs,” recalls Yourko.

“We spoke through our performances… to several generations of North Americans and reawakened an awareness, pride and realization of their Ukrainian roots and ethnicity,” says Ewhen. We helped make them “aware of the fact that they are part of a noble and historic national entity.”

“Many of that era retain fond memories of their personal Rushnychok experiences.” They realized, “that their heritage is wholesome and worthy of recognition,” notes Ewhen.

This is true “not only in North America,” he adds. “Through our recordings, this awareness extended to Europe and to the motherland of Ukraine.” There are “numerous testimonials, even 40 years later, of inspiring stories by current residents of Ukraine that attest to the fact that they found inspiration, knowing that in North America there were Ukrainians that not only retained a patriotic yearning, but that strived for what they aspired to, which was a revolution of change, an assertion of a rebirth of national identity, a pride of a people…” And, “Rushnychok remains part of that,” Ewhen concludes.

In September 2008, on-stage at the Montreal Ukrainian Festival, each of us received a plaque for our disciplined groundbreaking work to maintain the good name of our nation.

Then in 2015, the Father Jean Foundation, whose aim is to foster scholarship and good citizenship among Ukrainian Catholic youth in Montreal, honored Rushnychok at its annual dinner “for services rendered to the Montreal Ukrainian community.”

Through the years, friends and fellow travelers have richly rewarded each of us with reminiscences, quiet thanks and smiles.

There have been other occasional mentions of Rushnychok as far away as Ukraine itself. Last year, the regional newspaper Volyn compared Rushnychok to the Beatles one last time. Three days later, we would be whole no more. Andrij Harasymowycz died on June 26, 2019.

“Although he is gone now, he was, in many ways, the heart and soul of Rushnychok,” says Yourko. “Andrij was born to sing and perform, and was never happier than when he was on stage, in front of a crowd, doing what he did best. He knew the songs, knew how to perform them and knew how to make sure we understood their true meaning. We all miss him and his unique kindness, gentleness, but most of all, his passion for everything Ukrainian,” Yourko stresses.

“We can speak of the various performances throughout North America: the festivals, the private events and the numerous pro bono appearances that we staged for no other reason than the fact that we believed in the importance of being there,” says Ewhen.

This year, “we were on the cusp of being recognized by the people of Ukraine for our contribution; however, the pandemic has put that on hold,” Ewhen adds.

Indeed, this October Ewhen, Yourko and I were to have flown to Lviv for two tribute concerts. Some of Ukraine’s most popular artists were to have staged Rushnychok’s 12 original songs, adding their own star-power and interpretation. It would have been a significant closing of the circle.

Our parents brought their dreams from Ukraine. We were four 20-somethings, bursting at the seams with enthusiasm for the threads they had handed down to us. They each gave us good council once the band launched, and each parent in his or her own way had our backs. When challenges arose, they responded with love.

It was on a bitterly cold winter’s day that our first shipment of Rushnychok albums arrived on a pallet at Ewhen’s parents’ home. Neither he nor we were there to help unload them. The driver would only agree to place them where his truck met the curb. So Ewhen’s mother carried our albums, 25 to a box, into the garage, where they could stay pristine and dry.

Vinyl records are a curiosity these days. No longer are they loaded in great numbers onto pallets and delivered by truck. Music downloads are weightless and wait-less; virtual and instant. Today, Ukrainian artists sing in a multitude of languages and in genres as diverse as opera (Pavlo Hunka), classical (Carissa Klopoushak), choral (Hoosli), rock (Mad Heads), blues (Darka Stebilka), punk (TNMK), electro folk (ONUKA), reggae (Auresia) and zabava (Zirka). They are all representative – the best of the best.

We are proud to have been there once ourselves.

Stefan Andrusiak is a reporter and host of Nasha Kasha – A Ukrainian Almanac, which bills itself as “Radio for the Ukrainian Soul.” He was a member of Rushnychok.