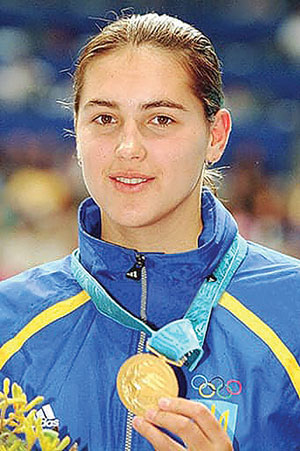 Swimmer Yana Klochkova with her medals from the 2004 Athens Summer Olympics.

The plan for covering the sports scene in 2020 certainly included Team Ukraine’s composition, performance and analysis at the Summer Olympics in Tokyo. Along came COVID-19 to put the world on hold for way too long. Ukraine’s elite athletes were granted an additional year of preparation for the Summer Games thanks to the pandemic.

Competitions on the world’s greatest sporting stage have finally come, and performances have been highlighted and analyzed. In an effort to keep the Olympic flame burning brightly, here is a fond remembrance of two most special Ukrainian gold medal champions.

Swimmer Yana Klochkova with her medals from the 2004 Athens Summer Olympics.

A certain weekend in the middle of May of 2016 was a most memorable moment for swimmers at Freedom Aquatics Club on Staten Island, N.Y. The club members got to meet and train with four-time Olympic gold medalist Yana Klochkova. She was invited by Nikolay Shevchenko, head coach of Freedom Aquatics.

Klochkova began her coaching session with the youngsters ages 7-16 by talking about her personal experiences in the pool and at the Olympics, even allowing those present to hold and try on her gold medals. Later she jumped into the pool with the swimmers to demonstrate all four swimming strokes with their respective proper techniques. Yana took the time to observe and critique each individual swimmer, offering pointers that would improve their swimming performance. She taught the students some different new drills, both in-pool and “dry land” exercises which included mandatory muscle stretching.

Klochkova began swimming at age 7, not certain she would be good at it because both parents were track and field stars. At first she seriously pursued gymnastics and synchronized swimming. At age 8 she kicked it up a notch and by age 11 she committed to the sport. She made the cut for Junior Nationals at 13, began a daily training regimen and started doing well in competitions within a couple of years. Her mid-teens saw her competing internationally and a major breakthrough occurred in early 1998 when she won a silver medal in the 400-meter individual medley at the World Championships. A year later she won both individual medleys and placed third in the 400-meter freestyle at the European Championships.

By 2000, 18-year-old Klochkova had achieved the young amateur’s ultimate goal: she qualified and made the Ukrainian Olympic Team.

At the 2000 Summer Olympics in Sydney, Australia, Klochkova won the gold medal and broke the world record in the 400-meter individual medley in a time of 4:33.59 seconds. In addition, she won gold and broke another Olympic record in the 200-meter medley with a time of 2:10.68 seconds. She further won a silver medal in the 800-meter freestyle with a time of 8:22.66 seconds.

Not resting on her laurels at the 2000 Olympics, a determined Klochkova set out to achieve more, embarking on four more years of intense swimming and dry land training, culminating in qualifying and making Team Ukraine again in 2004. She proceeded to once again win gold in the 200-meter individual medley with a time of 2:11.14 seconds and the 400-meter medley in a time of 4:34.83 seconds.

A question-and-answer session covering training, proper nourishment and fun facts about life was followed by swimming exercises and drills with visiting instructor Kloch­kova. The Olympian shared her past regimen, which included practice twice daily with two to three hours per practice and eight to 10 hours of sleep each night. A good night’s sleep guarantees improved performance in and out of the pool. It helps to be passionate about your sport, set realistically attainable goals and stick to those goals. Achieving one’s goals will never happen without properly taking care of one’s physical self, Klochkova said.

Klochkova stressed that proper focus is paramount. Athletes should focus on the big picture, but also on the little things because everything counts. The mental part of the training is of equal importance – always believe in yourself – psychological preparation is another big factor, Klochkova said. A superior athlete must have tons of confidence in his/her ability to win. One should do everything in their power to be their very best. Along the way there will be pain, sacrifice and disappointment. A belief in one’s self, 100 percent ultimate effort and a trust in one’s self should result in success.

For gold-medalist Klochkova, the above was without a doubt a personal winning formula.
Her career totals included 33 gold medals, 10 silver medals and four bronze medals in eight years of major international championship competitions.

Podkopayeva a hall of famer 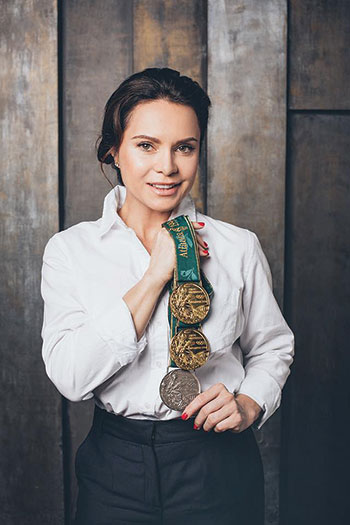 Ukrainian Lilia Podkopayeva possessed phenomenal gymnastics talent that won her the 1995 World and 1996 Olympic all-around titles, but her modesty and personal benevolence earned her admiration worldwide.

Throughout the history of gymnastics, certain champions have managed to rise above their athletic fame to emerge as character role models. Podkopayeva’s muscular, compact physique belied her innate qualities, which made each of her routines exquisite from start to finish. The Donetsk native emerged as a world star in the early 1990s, soon after the dissolution of the Soviet Union meant that Ukraine would compete as an independent nation.

Podkopayeva won the all-around gold medal at the 1995 World Championships in Sabae, Japan. Her final score was 39.248 in event finals – first on vault (9.781), second on uneven bars (9.837), second on balance beam (9.837) and seventh on floor. One year later, she captured gold medals in the all-around and floor exercise at the 1996 Atlanta Olympic Games. Her final score was 39.205 in event finals – first on uneven bars (9.825), first on floor (9.862) and third on balance beam (9.756). She won a second gold medal in the floor exercise final and a silver on the beam – becoming the only female gymnast since Nadia Comaneci to win an individual event gold after winning the all-around title in the same Olympics. Podkopayeva’s back-to-back world championship and Olympic victories were the first for a woman in the sport since Russian-born Ludmilla Tourischeva (who coached Podkopayeva) accomplished the feat over two decades earlier. (Tourischeva is a Ukrainian citizen, who resides in Kyiv.)

Following her retirement from competition, she coached in Florida before returning home to Ukraine. She is a bona fide celebrity in her homeland where she uses her high profile for the advancement of several humanitarian causes. She has been a regional government official, a United Nations Goodwill Ambassador and an Ambassador of the Council of Europe for Sport, Tolerance and Fair Play, helped establish and manage the Healthy Generation foundation, has organized variety shows in Kyiv to benefit children and often returns to the United States as a guest coach at summer camps.