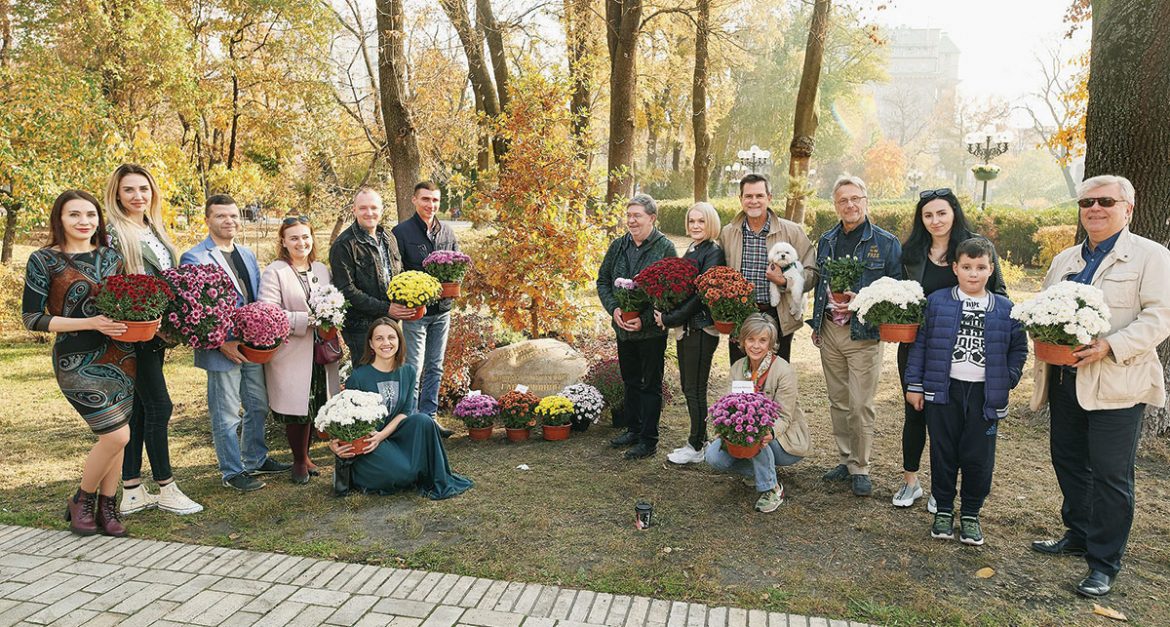 At the memorial event marking the 93rd anniversary of the birth of Bohdan Hawrylyshyn.

KYIV – This year, Ukraine is marking the 93rd birthday of the prominent economist Bohdan Hawrylyshyn. Three years ago, he passed away just a few days after a massive celebration of his 90th jubilee held in Kyiv’s Ukraina Palace. On that day, more than 3,000 people came to pay tribute to him in one of the biggest concert halls in Ukraine.

Last week, a much cozier gathering took place near the memorial stone of Bohdan Hawrylyshyn in Taras Shevchenko Park. A few dozen people brought chrysanthemums to plant around the stone in the city center of Ukraine’s capital and make this little reminder of prominent Ukrainian a little bit more colorful.

Dr. Hawrylyshyn was born on October 19, 1926, in the village of Koropets, Ternopil Oblast. Although he wrote a book “Remaining Ukrainian,” he is identified also as Canadian and Swiss. All three countries made a huge mark in his life, but eventually he dedicated himself to Ukraine’s development.

Dr. Hawrylyshyn was an economist, thinker, benefactor and advisor to governments and large companies worldwide. He was a full member of the Club of Rome, a long-time director of Switzerland’s International Management Institute (now the International Institute for Management Development), a founder of the European Management Forum in Davos (now the World Economic Forum), a fellow and member of the board of the World Academy of Art and Science. Dr. Hawryly­shyn also was a consultant to General Electric, IBM, Unilever and Philips, and an advisor to several countries.

After Ukraine re-established its independence in 1991, he was an advisor to several Ukrainian prime ministers and most chairmen of the Verkhovna Rada. Dr. Hawrylyshyn acted as an advisor to the first president of Ukraine, Leonid Kravchuk. This experience of working with politicians from the old Soviet school gave him an understanding that it is too difficult to teach old officials new management skills.

At the end of his life, Dr. Hawrylyshyn focused on youth organizations through the Bohdan Hawrylyshyn Charitable Foundation. Investment in youth was one of Dr. Hawrylyshyn’s main missions in life, because he believed that the new generation would be more open to Western democratic practices.

He was also an active member of the Lisovi Chorty fraternity within Plast Ukrainian Scouting Organization. From 2006 to 2008, Dr. Hawrylyshyn was head of the Plast board and brought to Ukraine’s most significant youth movement the mindset of strategic thinking. It was he who facilitated the development of Plast Ukraine’s first long-term strategy. Today, Ukrainian scouting has “Strategy 2030,” the development of which would have been impossible without Dr. Hawrylyshyn’s legacy.

The fund continues its most significant project, the “Young Generation Will Change Ukraine” program, whereby teams of young patriotic professionals receive organizational and financial support for a study trip to one of six European countries: Austria, Germany, Norway, Switzerland, Sweden or Poland. Grouped in teams of five to six people during one week, they study the European experience and, on their return, share the results of their research with the public.

“We started with a dream of what our country is supposed to be. Its natural and human potential is huge, and the current state is very bad. The dream turned into a plan. In 2012 the ‘Young Generation Will Change Ukraine’ program was launched to help the country go through a process of transformation and become an effective country,” Dr. Hawrylyshyn said a few years before he passed away. “It works above my expectations. I am very proud of the program participants. I have learned a lot from them, communicating with them and reading their articles.”

Another long-term project of the fund is the Ukrainian Youth Delegate to the United Nations. The program was founded in October 2014, and the first Ukrainian youth delegates took part in the 69th session of the U.N. General Assembly. The program was initiated by Victoria Shvydchenko and Victoriia Luchka and was launched thanks to the support of the Bohdan Hawrylyshyn Charitable Foundation. Each year the fund coordinates the competition in which two new youth delegates are selected and arranges their interaction with the Ministry of Foreign Affairs and travel logistics for these youth delegates to be competent representatives of Ukrainian youth at the United Nations.

Dr. Hawrylyshyn believed that human rights are fundamental. But rights come along with responsibilities, which are often neglected. That is why he created the Declaration of Human Responsibilities – a list of 15 primary responsibilities. He had a dream that this declaration would one day become recognized worldwide, and maybe even become a United Nations resolution. The first steps have been made by his family’s fund, which presented the idea of marking Responsibility Day each year on October 19 – the day of Dr. Hawrylyshyn’s birthday. They discovered that there is no Ukrainian or international day dedicated to responsibility, so they created one.

The chrysanthemum memorial event in Kyiv became the place where this decision was announced. Now the fund will prepare all the documents and start an advocacy campaign to convince the government of the importance of such a special day.

At the event, guests had an opportunity to say a few words in memory of Dr. Hawrylyshyn. All of them recalled his sincere smile and the light in his eyes each time he met a young person. Dr. Hawrylyshyn made a massive impact on the way Ukraine’s history was shaped, but behind that are hundreds of personal stories. Those memories belong to impactful people like Volodymyr Lavrenchuk, the chairman of the board of Raiffeisen Bank Aval (who is considered the best banker in Ukraine); Yurii Didula, founder and CEO of BUR (Building Ukraine Together), a volunteer project uniting people into a network of active citizens through the collaborative work restoring homes for families in distress and creating public spaces: and Violeta Moskalu, founder of the Global Ukraine Foundation.

“He always loved music, especially jazz,” said Patricia Shmorhun Hawrylyshyn, Dr. Hawrylyshyn’s daughter, before a jazzman began playing a melody. During the next few minutes, all of us present remembered our own stories about Dr. Hawrylyshyn and that light in his eyes.