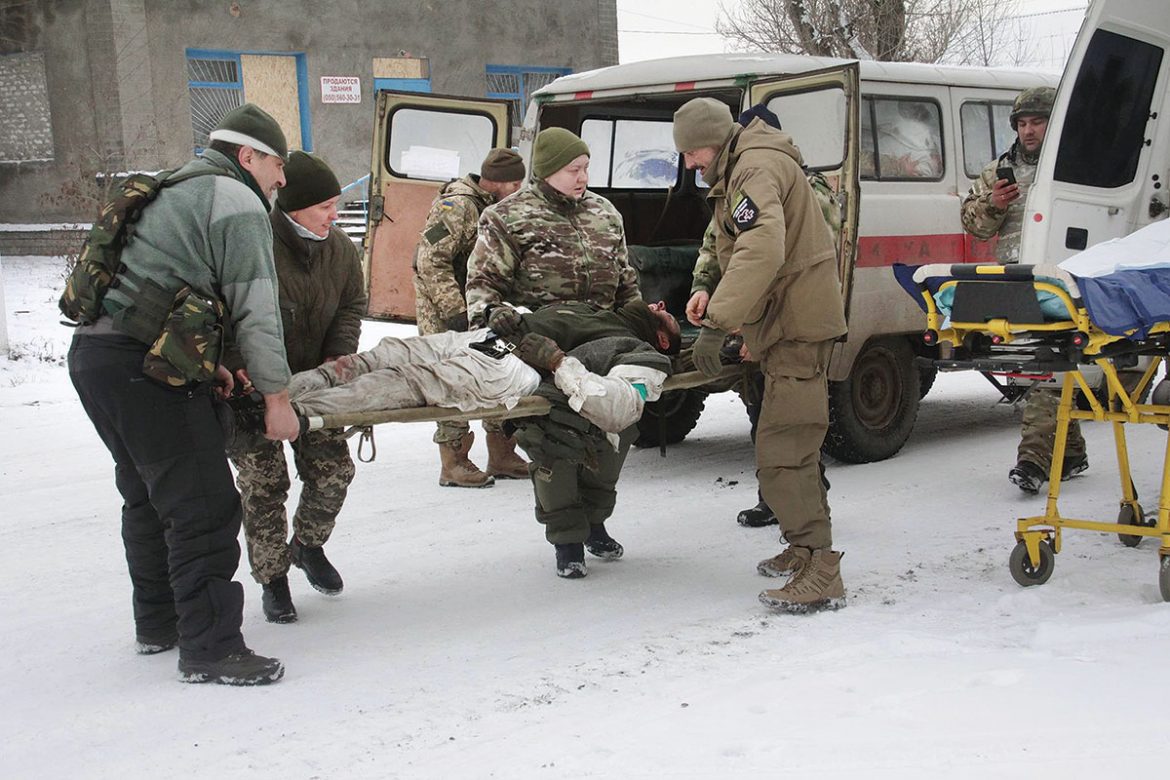 Wounded Ukrainians soldiers get evacuated some 800 meters from the frontline near Luhanske, a village situated along what is known as the Rostov-on-Don highway, not far from occupied Debaltseve, on December 18.

KYIV – Russia extensively used cross-border artillery fire against Ukrainian military targets in July-September 2014 in what are considered “acts of war,” according to a new report by Bellingcat, a group of citizen journalists who use open-source investigation tools and techniques, that was released on December 21.

Numbering in the “thousands,” the report says, the cross-border projectiles were the “first and strongest evidence of a direct Russian participation in the fighting.” Although they were already proven to have occurred by Ukrainian officials and the U.S. government, the new report analyzed the extent to which they were used in the summer of 2014, when they largely contributed to stemming a Ukrainian counterattack to retake the border areas near Russia, and cut off and surround the occupied Donbas capitals of Donetsk and Luhansk.

In total, at least 279 separate artillery attacks likely were fired inside Russia, targeting 408 Ukrainian military sites in the “entire border area of the conflict zone.”

Using recent additions of satellite imagery to Google Earth, Yandex and Bing map services, Bellingcat said it found evidence of Russian artillery fire in 2014 “to a much fuller extent.” It found that weapons such as howitzers and multiple rocket-launcher systems were used and, based on other open-source evidence, said that “allows for direct attribution of responsibility to the Armed Forces of the Russian Federation.”

Despite mounting evidence, Moscow authorities have consistently denied direct involvement in the Donbas war that has killed nearly 10,000 people and uprooted more than 1.7 million from their homes since April 2014. Instead, the Kremlin has attempted to portray the war as a civil conflict between Ukrainian government forces and indigenous pro-Russian separatists.

The open-source investigative group found that Russia’s artillery barrages “escalated” in “magnitude” the more Ukraine’s offensive in summer 2014 succeeded to liberate occupied territory. In spite of the cross-border shelling, Russia was forced to invade with ground troops and armor in late August of that year to prevent Luhansk and Donetsk from being encircled and cut off from each other along main roadways.

Regular Russian forces invaded en masse towards the Luhansk Airport, and Ilovaisk and Novoazovsk in Donetsk Oblast. Ukraine’s ensuing defeat at the battle of Ilovaisk led to the first peace deal that was brokered in the Belarusian capital of Minsk in September 2014.

The cross-border shelling also forced Ukraine’s army to alter its strategy and to pull back hundreds of troops from the Ukraine-Russia border with fighting concentrating in the “area of Marynivka, Savur-Mohyla and Amvrosiyivka [all in Donetsk Oblast],” according to the report.

Ukraine had five soldiers killed, 16 wounded and one missing, according to Ukraine’s envoy to the Organization for Security and Cooperation in Europe, the body that is monitoring another truce that was brokered in February 2015 and which has never taken hold.

At least three Russian passports were found on the battlefield, as well as Russian-made hardware and other documents of Russian origin, said Andriy Ishchyk, the press officer of the 54th Brigade, whose unit sustained the brunt of the attacks in Svitlodarsk.

All told, the OSCE observed “about 2,900 explosions between the evenings of December 18 and 19… The majority of ceasefire violations were recorded in the areas around Svitlodarsk, [occupied] Horlivka and Debaltseve.” There were about 1,000 explosions in the war zone the next day, the OSCE reported, and Ukraine’s military said three more Ukrainian soldiers died in battle and 14 more were wounded on December 20-21.

In turn, about 50 troops from the combined Russian-separatist forces were killed and wounded on December 18-19, Ukraine’s military intelligence reported.

Meanwhile, the European Union this week extended a package of sanctions against Russia for another six months for its annexation of the Ukrainian territory of Crimea and its role in stoking war in the Donbas.

The U.S. Treasury Department on December 20 broadened a separate set of restrictive measures towards Russia by including seven individuals, eight entities, and 26 subsidiaries of the Russian Agricultural Bank and Novatek to “counter attempts to circumvent these sanctions.”

“The United States remains steadfast in our commitment to maintain sanctions until Russia fully implements its commitments under the Minsk agreements. This action underscores the U.S. government’s opposition to Russia’s occupation of Crimea and our firm refusal to recognize its attempted annexation of the peninsula,” the Treasury Department said in a news release.

Defense spending in 2017 will be a “priority,” Ukraine’s Finance Ministry said in a statement on December 21 after Parliament passed next year’s state budget at 4:52 a.m. the same day. Although the final version of the budget hasn’t been published due to last-minute changes, defense spending isn’t expected to be lower than 5 percent of gross domestic product (GDP) – the equivalent of this year’s spending – given that overt Russian military aggression is not abating.

Thus, based on Ukraine’s forecasted GDP of $95.7 billion, defense spending shouldn’t be less than $4.8 billion. By comparison, NATO’s official guidelines stipulate that its member states should spend at least 2 percent of their GDP on defense.

GDP is expected to grow by 3 percent, and the minimum monthly wage doubled to $118 amid a forecasted 3-percent GDP deficit. The International Monetary Fund, with whom Ukraine has a $17.5 billion loan package, has yet to comment on the budget as of December 21.

In November, the Washington-based lender said Ukraine needed to pass a “suitable” budget and fight corruption more vigorously to secure additional installments of the bailout money.