NEW YORK – Ukrainian Americans and their supporters came together at the landmark St. Patrick’s Cathedral on Saturday, November 17, for a solemn remembrance of the 85th anniversary of Ukraine’s genocide, the Holodomor of 1932-1933.

A procession preceded the service. Participating were a color guards of the Ukrainian American Veterans (UAV), pupils of the Self Reliance School of Ukrainian Studies in New York, members of the Ukrainian American Youth Association branch in Jersey City, N.J., and students of St. George Academy in New York, who carried a banner reading “Saint George Academy remembers 1932-1933 Genocide Holodomor in Ukraine.” At the head of the procession was Holodomor survivor Nadia Severyn, escorted by her grandson Bill Wieting, and UAV National Commander Ihor Rudko. Mrs. Severyn placed a sheaf of wheat before the candle of remembrance. 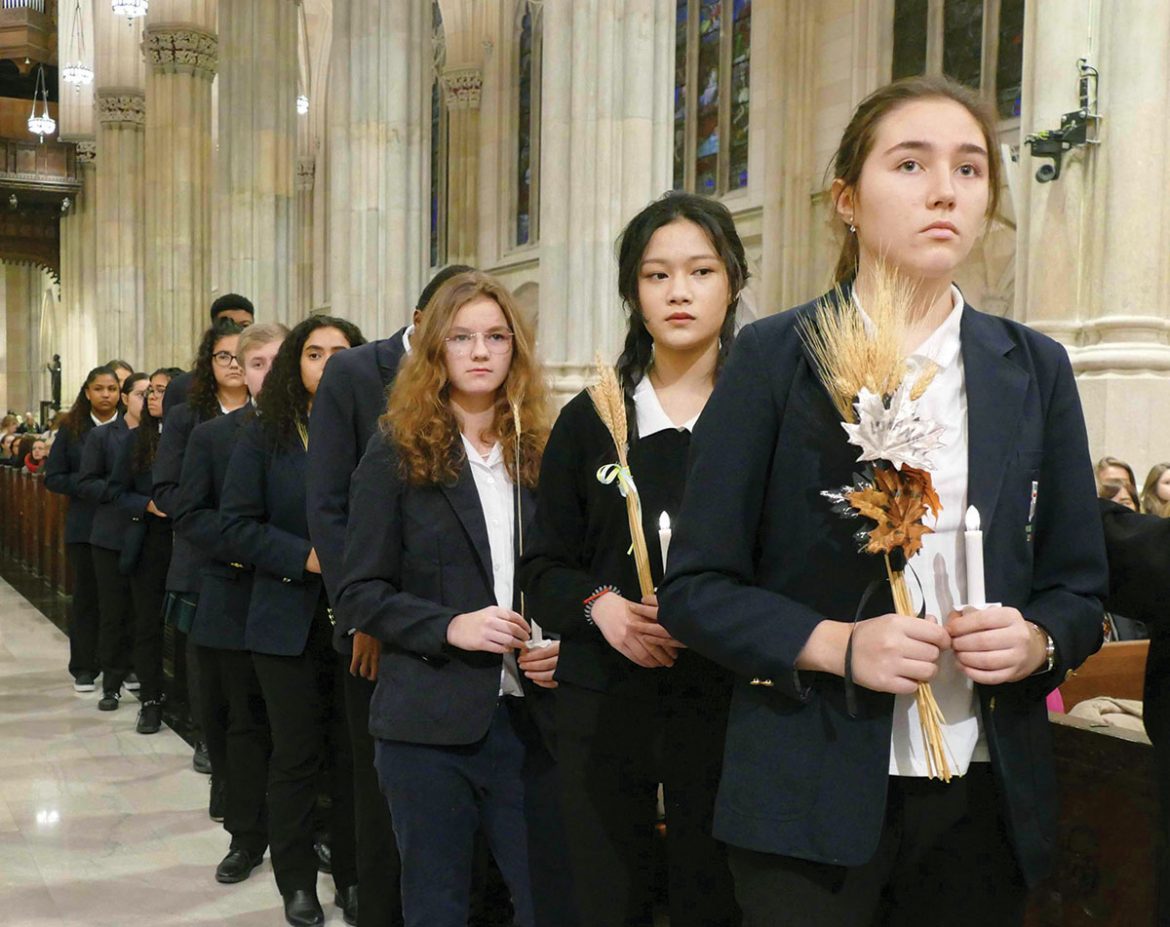 Students of St. George Academy during the procession.

Opening remarks were delivered by Metropolitan Antony, who pointed out that the genocidal Famine of 1932-1933 in which up to 10 million were killed “has no analogy” and underscored that “We have no right ever to forget.” He continued: “This tragedy, though it deeply wounded our nation, did not destroy us. At that time and even today, it strengthens us. …It even served as the beginning of the end of the atheistic regime.”

After the panakhyda (requiem service), Andriy Futey, president of the Ukrainian Congress Committee of America, took over as master of ceremonies for the program. In his own address, he stated: “What occurred 85 years ago in Ukraine was evil in its design and brutal in its methods. It was a deliberate act with the intent to destroy the Ukrainian nation. … This barbarous act resulted in the deaths of 7 to 10 million people. It was kept hidden from the world and is one of the largest genocides of the 20th century.” 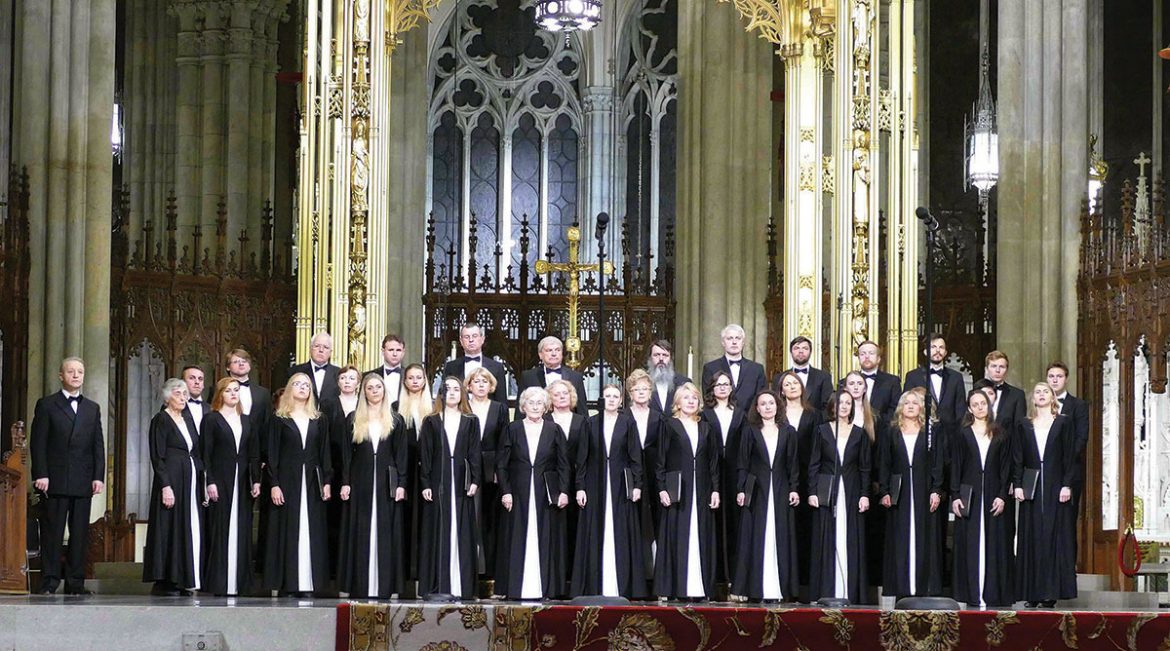 The Ukrainian Dumka Chorus and its director, Vasyl Hrechynsky (left).

He cited the words of Prof. Norman Davies of Oxford University, who wrote: “The purpose was to kill Ukrainian nationhood… The world has seen many terrible famines, many aggravated by civil war. But a famine organized as a genocidal act of state policy must be considered unique.” Mr. Futey then noted the assessment of Dr. Raphael Lemkin who stated unequivocally that the events of the early 1930s in Ukraine are “a case of genocide, of destruction, not of individuals only, but of a culture and a nation.” (An adapted version of Mr. Futey’s speech appears on page 6 of this issue as a guest editorial.) 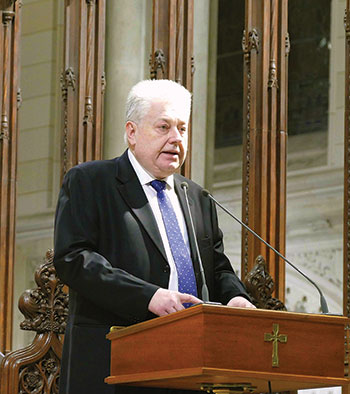 Ambassador Volodymyr Yelchenko, Ukraine’s permanent representative to the United Nations, explained that the Holodomor was in fact “an undeclared war against the Ukrainian nation.” He added that “today’s Russian aggression against Ukraine is nothing but a continuation of the same policy of the destruction of our country.”

Oleksii Holubov, Ukraine’s consul general in New York, read a message from Ambassador Valeriy Chaly, who was unable to attend the service because of his participation along with Ukraine’s Foreign Affairs Minister Pavlo Klimkin in the 2018 Halifax International Security Forum in Nova Scotia.

Ukraine’s ambassador to the U.S. thanked the U.S. government, as well as the many governors, state legislators and mayors who have recognized the Holodomor as a genocide directed against the Ukrainian people. He also expressed thanks to Ukrainian Americans for their great efforts toward securing such recognition. 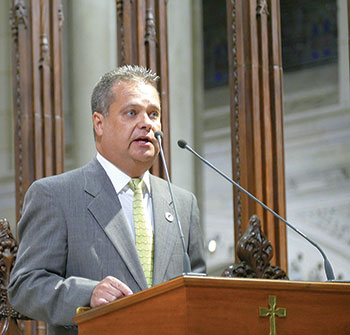 Andriy Futey, president of the Ukrainian Congress Committee of America.

Mr. Futey noted that Sen. Charles Schumer (D-N.Y.,) a regular participant of the annual Holodomor service, was unable to attend this year because of his daughter’s wedding, but had sent a message to the solemn gathering. Mr. Futey then read the senator’s letter in which he said he was “humbled and honored to join in spirit with everyone gathered here today to remember and honor the millions of innocent victims of Ukraine’s Genocide.” (The text of the senator’s message appears on page 7.)

The presence of New York City Councilwoman Carlina Rivera who represents the East Village, where many Ukrainians reside, was acknowledged by Mr. Futey.

Concluding remarks were offered by Bishop Paul, who thanked Cardinal Timothy Dolan for once again permitting the Ukrainian community to hold its Holodomor commemoration in St. Patrick’s Cathedral and the Dumka Chorus and Mr. Hrechynsky for their “evocative and moving responses to the panakhyda service.” 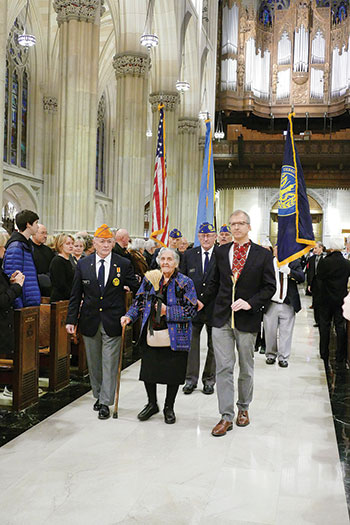 The service was livestreamed by the Ukrainian Congress Committee of America via its Facebook page; the video remains available for viewing on the UCCA’s page, as well as on The Ukrainian Weekly’s Facebook page.