PHILADELPHIA – Metropolitan-Arch­bishop emeritus Stephen Sulyk, who headed the Ukrainian Catholic Church in the United States in 1981-2000, died on April 6 at the age of 95. A day earlier, he had been hospitalized with symptoms of the coronavirus.

Archbishop-Metropolitan Borys Gudziak wrote on Facebook on April 5: “A few hours ago, Archbishop Stephen was hospitalized. He is presenting the symptoms of COVID-19, and his vital signs are weak. The Archbishop is receiving comfort care. Everything is in the Lord’s hands.”

Metropolitan Borys provided the following biography of the deceased hierarch. 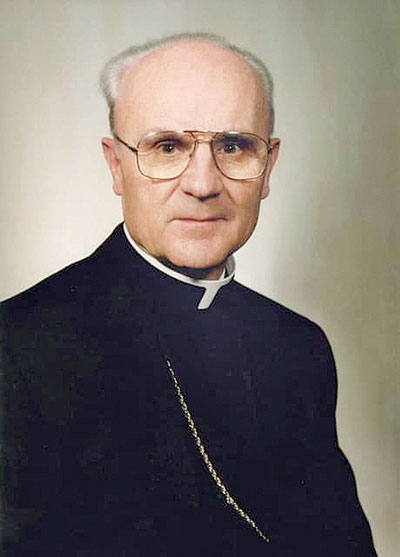 Stephen Sulyk was born to Michael and Mary Denys Sulyk on October 2, 1924, in Balnycia, a village in the Lemko District of the Carpathian mountains in western Ukraine. In 1944, he graduated from high school in Sambir. After graduation, the events of World War II forced him to leave his native land and share the experience of a refugee.

He entered the Ukrainian Catholic Seminary of the Holy Spirit in Hirschberg, Germany. In 1948, he migrated to the United States and continued his priestly studies at St. Josaphat’s Seminary and The Catholic University of America in Washington.

In 1952, he received his S.T.L. degree from the Catholic University of America and was ordained to the priesthood on June 14, 1952, at the Immaculate Conception Cathedral in Philadelphia.

After ordination, he served as assistant pastor in Omaha, Neb., Brooklyn, N.Y., Minersville, Pa., and Youngstown, Ohio. Father Sulyk received his first pastoral assignment in 1955 in Phoenixville, Pa., with the additional responsibilities of chancery secretary.

From July 1, 1957, until October 5, 1961, he was pastor of St. Michael’s Church in Frackville, Pa. During his short tenure of four years, he built, furnished and paid for a new church and parish social hall. Annual gross income rose from $10,000 in 1957 to $60,000 in what was considered a financially depressed area.

After a short stay at St. Nicholas Parish in Philadelphia, on March 22, 1962, he was appointed pastor of Assumption Church in Perth Amboy, N.J. Within a year, he completed a new elementary school. During his pastorate, Father Sulyk converted the rectory into a convent for nuns, built a new rectory, purchased and landscaped additional parish grounds, and renovated the parish church. He also compiled and printed a series of bilingual texts for use in liturgical services. On May 31, 1968, Pope Paul VI granted him the dignity of papal chaplain with the title of monsignor.

On December 29, 1980, he was appointed metropolitan-archbishop of Philadel­phia by Pope John Paul II. He was consecrated bishop in Rome on March 1, 1981.

He supervised the construction of a new chancery center, bishop’s residence and cathedral rectory. He renovated the sanctuary of Immaculate Conception Cathedral and landscaped the adjoining grounds. He established the Seminary Endowment Fund to finance the education of seminarians and to provide income for St. Josaphat’s Seminary.

At the request of the Vatican, he was involved in sensitive diplomatic talks with members of the Orthodox Church in Ukraine at the time the Soviet Union was collapsing, Ukraine was becoming an independent state and the Ukrainian Catholic Church was emerging from its existence as a persecuted catacomb Church under the atheistic communism of the Soviets.

Metropolitan Stephen served on various committees of the United States Conference of Catholic Bishops and the Synod of Bishops of the Ukrainian Catholic Church.

June 14, 2002, was the 50th anniversary of his ordination to the holy priesthood and the jubilee was observed with the celebration of a hierarchical divine liturgy and a testimonial banquet on June 23, 2002.

During his retirement years, the former metropolitan lived in Cherry Hill, N.J.

On April 8, Metropolitan Borys advised that the funeral of Metropolitan Stephen will be on Monday, April 13. He will be buried in the Immaculate Conception Cathedral’s crypt next to Bishop Soter Ortynsky, Bishop Constantine Bohachevsky and Metropolitan Ambrose Senyshyn. There will be a very limited number of people present at the funeral due to the coronavirus epidemic. The faithful may watch the funeral livestreamed on the Facebook page of the Archeparchy of Philadelphia at 10 a.m.