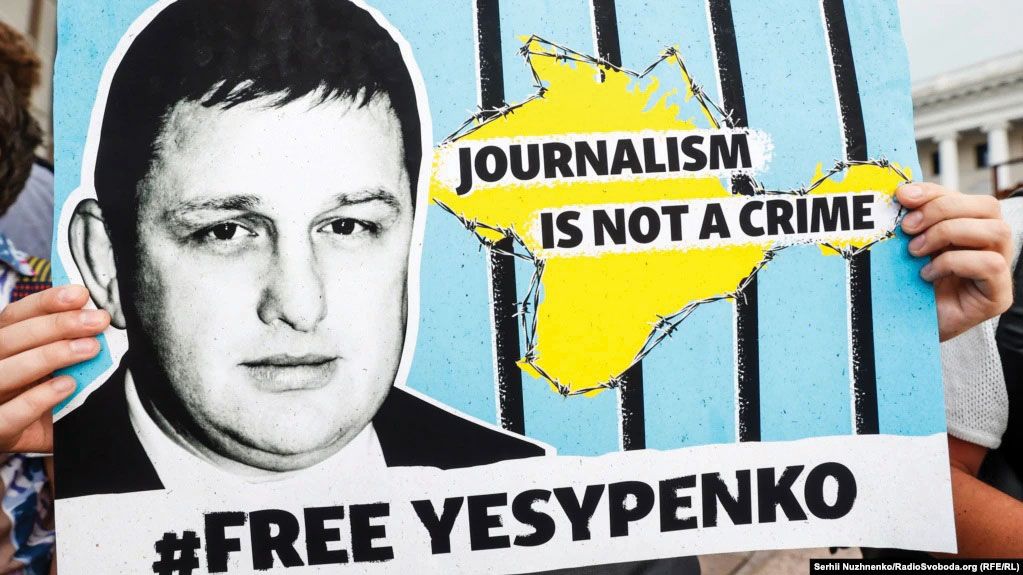 A protester holds a sign supporting imprisoned RFE/RL Crimea.Realities freelance journalist Vladislav Yesypenko at a rally in Kyiv on July 6.

A protester holds a sign supporting imprisoned RFE/RL Crimea.Realities freelance journalist Vladislav Yesypenko at a rally in Kyiv on July 6.

WASHINGTON – RFE/RL President Jamie Fly condemned a decision on July 6 by a court in Russia-occupied Crimea to extend by six months the detention of RFE/RL freelance reporter Vladyslav Yesypenko. This latest Kremlin-backed move to target independent media outlets was announced during a closed-door hearing on July 6 in Simferopol regarding Mr. Yesypenko’s politically-motivated case. The next hearing is scheduled for July 15.

Mr. Yesypenko, a resident of Crimea who fled the Ukrainian peninsula following its unrecognized annexation by Russia in 2014, has been in prison since March 10, when he was detained by the Russian Federal Security Service (FSB) after attending a peaceful gathering in Simferopol. There is ample evidence that the FSB used torture to extract a confession. Mr. Yesypen­ko faces two charges: illegally acquiring and transporting explosives, and illegally manufacturing explosives; prosecutors have already admitted that a grenade that was “found” in his vehicle did not have his fingerprints on it.

“Vladyslav Yesypenko is guilty of nothing more than being a journalist,” Mr. Fly said. “He was trying to share the truth about the situation in Crimea with the outside world before facing detention and apparent torture at the hands of his Russia-based captors. The only legitimate verdict this judge could render is a finding of innocence and Vladislav’s immediate return to his wife and daughter.”

Supporters of Mr. Yesypenko gathered for solidarity rallies today in the Ukrainian capital of Kyiv as well as the city of Vinny­tsia, organized by the Crimean Human Rights Group, ZMINA Human Rights Center, National Union of Journalists of Ukraine, Association of Relatives of Kremlin Political Prisoners and the Platform for the Release of Political Prisoners. The rally in Kyiv featured comments by Mr. Yesypenko’s wife, Kateryna. The groups also encouraged supporters to take part in an online campaign using the hashtag #FreeYesypenko and to send letters of support to the jailed journalist.

Free media advocates and international organizations including Ukrainian Foreign Affairs Minister Dmytro Kuleba, U.S. State Department spokesman Ned Price, U.S. Charge d’affaires at the OSCE Courtney Austrian, OSCE Representative on Freedom of the Media Teresa Ribeiro, the Committee to Protect Journalists, Reporters Without Borders, the European and International Federations of Journalists (EFJ-IFJ) and Freedom House have all called for Mr. Yesypenko’s immediate release in the absence of evidence of any wrongdoing.

Freedom House noted that Mr. Yesypen­ko’s detention is only one example of the harassment directed at RFE/RL journalists working in Crimea. To date, nearly 60 journalists working with the Crimea.Realities outlet alone have been forced to stop their work or leave Crimea as a result.

RFE/RL relies on its networks of local reporters to provide accurate news and information to more than 41 million people every week in 27 languages and 23 countries where media freedom is restricted, or where a professional press has not fully developed. Its videos were viewed 6.5 billion times on Facebook, YouTube, and Instagram/IGTV in fiscal year 2020. RFE/RL is an editorially independent media company funded by a grant from the U.S. Congress through the U.S. Agency for Global Media.