Delegates of the 70th Convention of the Ukrainian Orthodox League.

Metropolitan Antony and Archbishop Daniel actively participated in the daily sessions of the convention, of one of the oldest central organizations of the UOC-U.S.A.

The convention was opened with a prayer that was offered before the first business session was called to order on the evening of July 26. Following the invocation offered by Metropolitan Antony, the “Pledge of Allegiance” to the U.S. flag was recited and delegates sang the U.S. national anthem.

Opening remarks and greetings were expressed by UOL National Executive Board Presidents John Holowko (Senior UOL) and Orest Mahlay (Junior UOL). The convention’s spiritual advisor, the Rev. Boris Kroner, and Senior Convention Committee Chairman Cindy Charest welcomed all the guests to Rhode Island and offered the full services and assistance of the hosting UOL chapter. The first formal session of the day concluded with the approval of the agenda, minutes, financial records and audit reports.

The second day began with the “teaching” divine liturgy that was served by the Very Rev. Taras Naumenko, Archdeacon Vasyl (Janick) and Deacon Ivan Tchopko, while the Very Rev. Anthony Perkins offered reflections on various sections of the liturgy, urging the delegates to immerse themselves into the spiritually rich and uplifting treasury of Christ’s presence.

During the business sessions, St. Michael’s Senior UOL Chapter presented a reflection on the new service project of the UOL and urged those in attendance to offer charitable gifts of love in order to sustain several special education teachers at the Znamianka Children’s Orphanage in Ukraine. Three embroidery pieces made by the children at the orphanage were introduced by Eleanor Kogut (2017 Summer Mission Trip participant), who encouraged everyone to participate in the auction that would be concluded on the last day of the convention. The funds raised will go directly to the orphanage.

Dr. Gayle Woloschak, a keynote speaker of the convention, expounded on the topic “Our Church in Today’s Secular World” about the challenges of modernity and the Church’s response to the needs of its faithful.

Speaking to the Junior UOL delegates, Archbishop Daniel shared a story of his personal relationship with his brother and the importance of building up relationships of spiritual quality in the world of technological advances. Later in the afternoon, the pre-teens and children attending the convention participated in various games, in which the archbishop readily volunteered to participate.

St. Andrew Society, the second largest central organization of the Church was a recipient of this year’s “Souper Bowl Sunday” award in the amount of $6,000 that was presented by Mr. Holowko to Protodeacon Ihor Mahlay, president of the society. Accepting the donation, Protodeacon Ihor spoke of the common ministry of both organizations and the great part that the UOL has played in helping St. Andrew’s Society raise and distribute about $1.3 million for charitable projects during the past 25 years.

The Very Rev. John Haluszczak, acting manager of All Saints Camp, shared with delegates the successes of this year’s Camping Ministry and called on the general UOL membership to be the moving spiritual force behind the spiritual and physical improvements at the camp.

Teresa Linck presented the UOL Essay Contest Awards on behalf of UOL Executive Board to this year’s winners and participants.

The third day of the convention began with the liturgical celebration of the life and legacy of Holy Equal-to-the-Apostles Grand Prince Volodymyr. With the blessing of Archbishop Daniel, the divine liturgy for the feast day of St. Volodymyr was celebrated by the Very Rev. Myron Oryhon, the Very Rev. Haluszczak, the Rev. Vasyl Pasakas, the Rev. Philip Harendza, Protodeacon Ihor and Deacon John Charest. 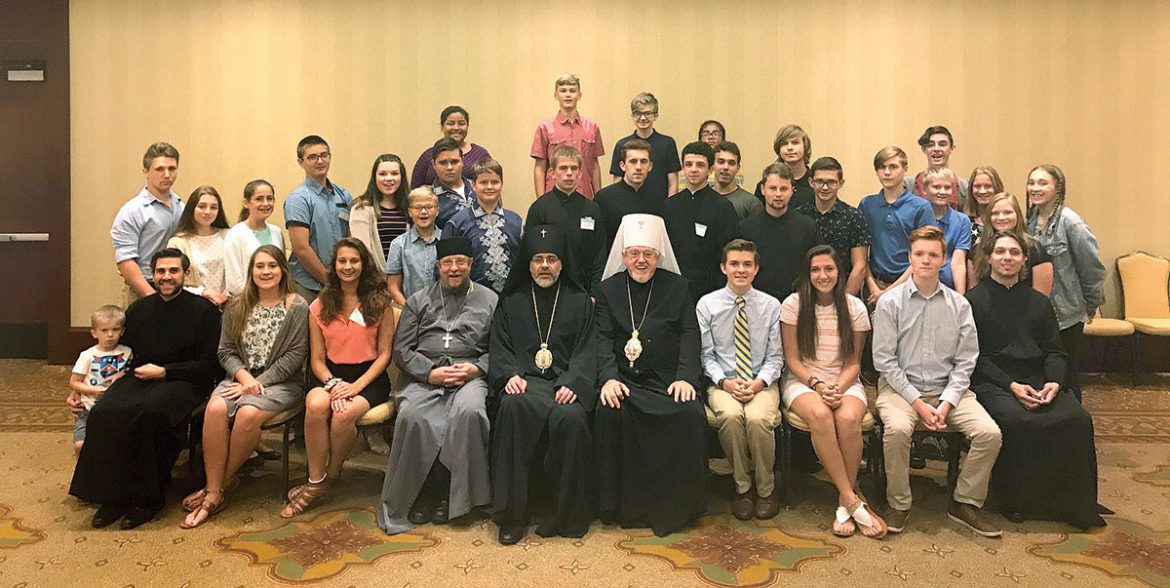 Archbishop Daniel and Metropolitan Antony with the delegates of the Junior UOL.

Archbishop Daniel offered a short reflection on the spiritual legacy of St. Volodymyr the Great and urged all to emulate the spiritual virtues of the holy and grand prince of Kyivan-Rus’ in a day of modern challenges and uncertainties.

Following breakfast, the convention agenda continued until the point that a second keynote speaker of the convention was introduced. The Very Rev. Nicholas Apostola of the Romanian Orthodox Church of Wooster, Mass., offered a reflection titled “Caring with Faith for Our Elderly,” addressing the pastoral, social and moral issues of adequate care for our society’s seniors.

The remaining time of the convention day was reserved for some social quality time while visiting the mansion estates in Newport, R.I., and a clambake on the waterfront of Narragansett Bay in historic Jamestown, R.I.

The fourth day of the convention began with the early morning Akathist service in front of the icon of the Mother of God of Pochayiv. Chanters from various parishes and chapters joined in singing the uplifting praises to the Mother of God during the liturgical service served by Archbishop Daniel and the Very Rev. Naumenko.

Several committee reports were presented, discussed and adopted. It was determined that the 2020 UOL Convention will be hosted by Senior and Junior UOL chapters of St. Vladimir Ukrainian Orthodox Cathedral in Philadelphia, while the 2018 UOL Convention will coincide with the centennial celebration of the UOC-U.S.A. at the Metropolia Center of the Church in South Bound Brook, N.J.

After a few other announcements, the 70th annual Ukrainian Orthodox League Convention was adjourned and the delegates began their preparations for a vesper service.

The day concluded with a formal banquet in honor of the 70th annual UOL Convention. The traditional awards were presented, as the final official acts of the convention, by the Junior and Senior UOL presidents, and Seminarian Scholarship winners were announced. Seminarians were awarded scholarships from the Metropolitan John Scholarship Fund.

The convention came to a formal conclusion on Sunday, July 30, as the delegates gathered at Archangel Michael Ukrainian Orthodox Church in Woonsocket for a divine liturgy concelebrated by Metropolitan Antony and Archbishop Daniel. The Very Rev. Kroner offered words of prayerful welcome to the metropolitan and the archbishop, asking them to pray for the success of the numerous ministries of the Church’s central organizations.

At the conclusion of the service, Archbishop Daniel called on the newly elected executive boards of the Senior and Junior UOL to come forward in order to be presented to Metropolitan Antony, the prime hierarch of the UOC-U.S.A., for a formal induction into their service in the life of the organization and the Church. Holding candles in their hands, the officers of the organization made a solemn promise to work for the glory of God and the fulfillment of the mission of the organization: “Dedicated to the Church; Devoted to Her Youth!”

Various presentations were offered following liturgy, during which the faithful venerated the icons of the newly restored Archangel Michael Ukrainian Orthodox Church. Afterwards delegates proceeded to the parish social hall for a farewell brunch prepared by the local UOL chapter and the entire parish congregation.