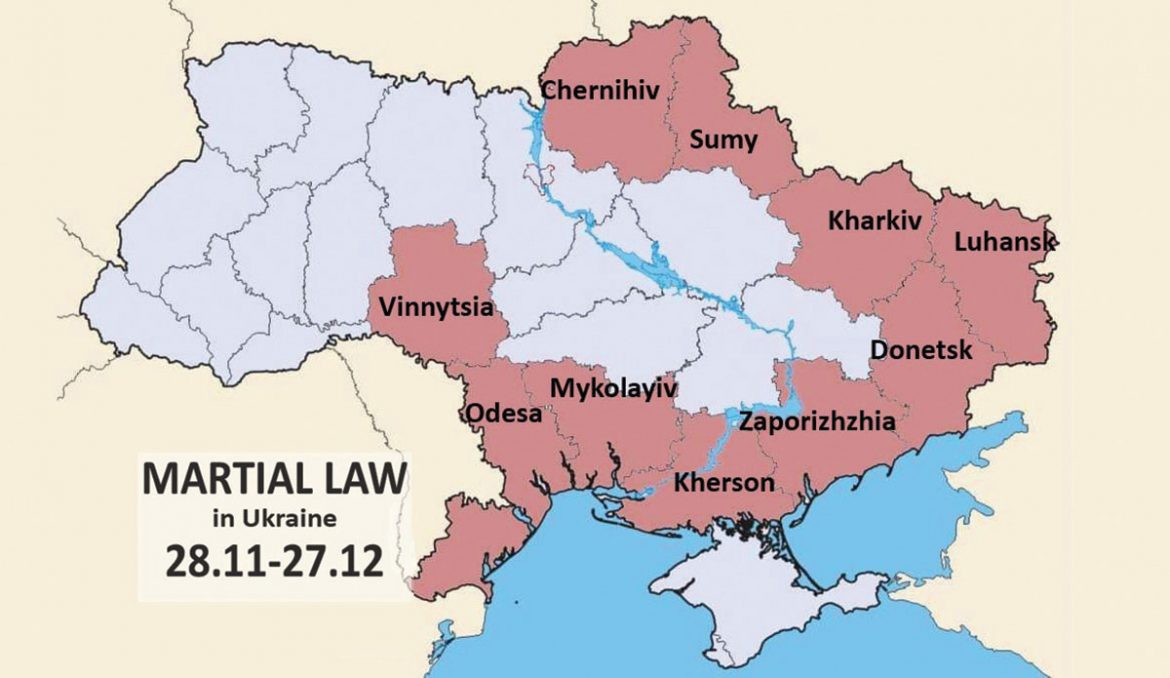 Reddish shaded areas show the 10 oblasts where martial law is in effect through December 26.

KYIV – Tensions between the Kremlin and Kyiv further escalated during an open act of war on November 25 when Russian forces attacked three Ukrainian navy vessels in shared waters and took them into custody along with two dozen Ukrainian servicemen.

In turn, Ukraine three days later imposed martial law for one month in 10 regions that border Russia, coastal areas and the unrecognized pro-Russian breakaway region of Transnistria, that President Petro Poroshenko said the move will give the army more flexibility in military planning and operations.

Russia that same day announced it is adding more of its modern S-400 anti-aircraft missile systems to the Crimean peninsula that it annexed in February 2014. It’s also sending the Vice-Admiral Zakharin minesweeper to the Azov Sea from the Black Sea.

After the maritime attack, Ukraine’s military was put on full alert and combat readiness. Meanwhile, the Border Guard Service starting denying entry to Russians in unusually high numbers. On November 26-27, more than 150 Russians were denied entry at two Kyiv airports. Normally, 20 to 30 Russians are denied entry daily, the Border Guard Service said. Ukraine’s first wartime president said he would make a “final decision” in the near future on limiting the ability of Russians to enter the country for the duration of martial law. 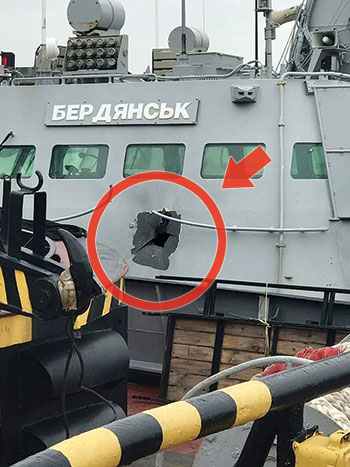 The artillery boat Berdyansk was fired upon by Russian forces on November 25 near the Kerch Strait.

“Russia broke international law and made an act of aggression,” Mr. Poroshenko told CNN on November 27. He added that Russia has built up significant forces again at Ukraine’s border that is creating the “threat” of “full-scale war,” citing both Ukrainian and NATO intelligence sources.

Specifically, about 500 Russian combat aircraft and up to 340 helicopters are at Ukraine’s border and their flight radius could cover the entire country, said Vadym Skibitsky of the Defense Ministry’s intelligence directorate.

“Since 2013, the Russian Federation has been modernizing its entire airfield network along the Ukrainian border, upgrading the fleet of combat aircraft and expanding the capabilities of army aviation,” he said.

In terms of ground troops, Mr. Skibitsky said there are 25 Russian battalion tactical groups “capable of carrying out combat missions on our territory.” A hot ground war with Russia is in its fifth year in the easternmost regions of Luhansk and Donetsk where more than 10,400 people have been killed and more than 1.6 million displaced.

The naval attack occurred in neutral waters off the southern coast of Crimea as the Ukrainian ships were approaching a chokepoint that links the Black and Azov seas. Two Ukrainian gunboats and one tugboat were en route from Odesa to the Azov Sea port of Mariupol in Ukraine when they were attacked. Ten Russian military vessels, Ka-52 combat helicopters and five Su-30 fighter jets were scrambled during the assault, the Security Service of Ukraine (SBU) reported.

Russia blamed Ukraine for the incident, calling it a “provocation,” although a Russian-sourced video published by Ukraine’s Defense Ministry showed a Russian coast guard ship ramming the tug boat, and damaging its engine and hull as a result.

Ukraine’s military also published coordinates of its ships’ location in the Black Sea and released intercepted audio communication between Russian sailors and their commanders ashore.

In it, one Russian sailor says that Vice Admiral Gennady Medvedev, who heads the coast guard border service that is subordinated to Russia’s Federal Security Service (FSB), is “panicking,” adding that “we should assault them. We have to destroy them.”

Then the sailor says that “it seems that the president [Vladimir Putin] is in control of all of this sh*t.”

The two Ukrainian artillery boats – Berdyansk and Nikopol – were fired upon by the Russian vessels and a Russian jet, the SBU said, adding that two unguided missiles were fired from the plane. These two vessels and the tugboat were taken to Kerch in Russia-annexed Crimea. The Ukrainian military said that six of the 24 crew members aboard the vessels were wounded. Two crew members are SBU officers who were conducting counterintelligence, said SBU chief Vasyl Hrytsak. One officer, Andriy Drach, was wounded in the attack.

Following trials in the Crimean capital of Symferopol, all 24 of the captives were placed in pre-trial detention for 60 days on charges that they trespassed on Russian territory.

Ukrainian authorities maintain that the ships were navigating neutral waters and said that Russia violated a 2003 bilateral cooperation treaty regarding the Azov Sea and the Kerch Strait that allows for free use of the waterways.

Moscow says the area is its territorial waters, although an overwhelming majority of the 195 member countries of the United Nations haven’t recognized Russia’s takeover of Crimea. Russia has been subject to a series of European Union and U.S. sanctions for the peninsula’s takeover and for illegally building a bridge across the Kerch Strait that opened in May.

America’s ambassador to the U.N., Nikki Haley, said that “Russia must immediately cease its unlawful conduct and respect the navigational rights and freedoms of all states.”

Kurt Volker, America’s point man on the Donbas war at the State Department, tweeted that “Russia rams Ukrainian vessel peacefully traveling toward a Ukrainian port. Russia seizes ships and crew and then accuses Ukraine of provocation???”

NATO Secretary General Jens Stoltenberg said: “There is no justification for the use of military force against Ukrainian ships and naval personnel. So we call on Russia to release immediately the Ukrainian sailors and ships it seized yesterday. Russia’s ongoing militarization of Crimea, the Black Sea and the Sea of Azov, poses further threats to Ukraine’s independence. And undermines the stability of the broader region.”

Military expert Phillip Karber, president of the Potomac Foundation, said that “by any standard of international behavior – invasion and occupation of sovereign territory, attack on peaceful shipping, high levels of violence and repeated violation of international law – Russia is waging war on Ukraine.”

In an analysis that was published in June by the Jamestown Foundation, retired Ukrainian admiral Ihor Kabanenko called Russia’s actions in the Azov Sea over the past year a “boa constrictor strategy” whose purpose is to strangle “the economy of Ukraine’s littoral areas.”

Nearly 700 merchant vessels were subject to time-consuming and money-draining inspections by Russian authorities in the first six months of this year. The arbitrary inspection of non-Russian ships has caused more than $36 million in losses, Mr. Kabanenko said.

Russia has also quadrupled the number of military and patrol ships in the Azov Sea to 120.

Then, in May, a bridge opened that connects mainland Russia with the Crimean city of Kerch; its height significantly restricts clearance for bigger ships to pass through.

On November 29, Ukraine’s Minister of Infrastructure Volodymyr Omelyan reported that Ukraine’s Azov Sea ports “are effectively under blockade by the Russian Federation. Vessels are being barred from leaving and entering.”

“Putting military pressure on Ukrainian assets in the Sea of Azov contributes to the Kremlin’s long-term strategy of keeping Ukraine politically weak and divided, especially ahead of the March 2019 presidential elections,” wrote Mathieu Boulegue, research fellow at London-based Chatham House. “Recent developments are also part of the Kremlin’s wider strategy to turn the Black Sea into a ‘Russian lake’ under its military dominance as well as to consolidate the claim that Crimea is a constituent part of the territory of the Russian Federation.”

Mr. Poroshenko’s office said his Russian counterpart wouldn’t accept a telephone call following the Kerch incident. He told NBC news this week that his message to U.S. President Donald Trump is that Mr. Putin must “get out of Ukraine.”

However, Mr. Trump told The Washington Post in an interview soon after the maritime attack that he may not meet with the Russian president at the G-20 summit in Argentina that starts on November 30.

Then, on November 29, while en route to Argentina, the U.S. president tweeted: “Based on the fact that the ships and sailors have not been returned to Ukraine from Russia, I have decided it would be best for all parties concerned to cancel my previously scheduled meeting…” In the next tweet, he continued: “…in Argentina with President Vladimir Putin. I look forward to a meaningful Summit again as soon as this situation is resolved!”