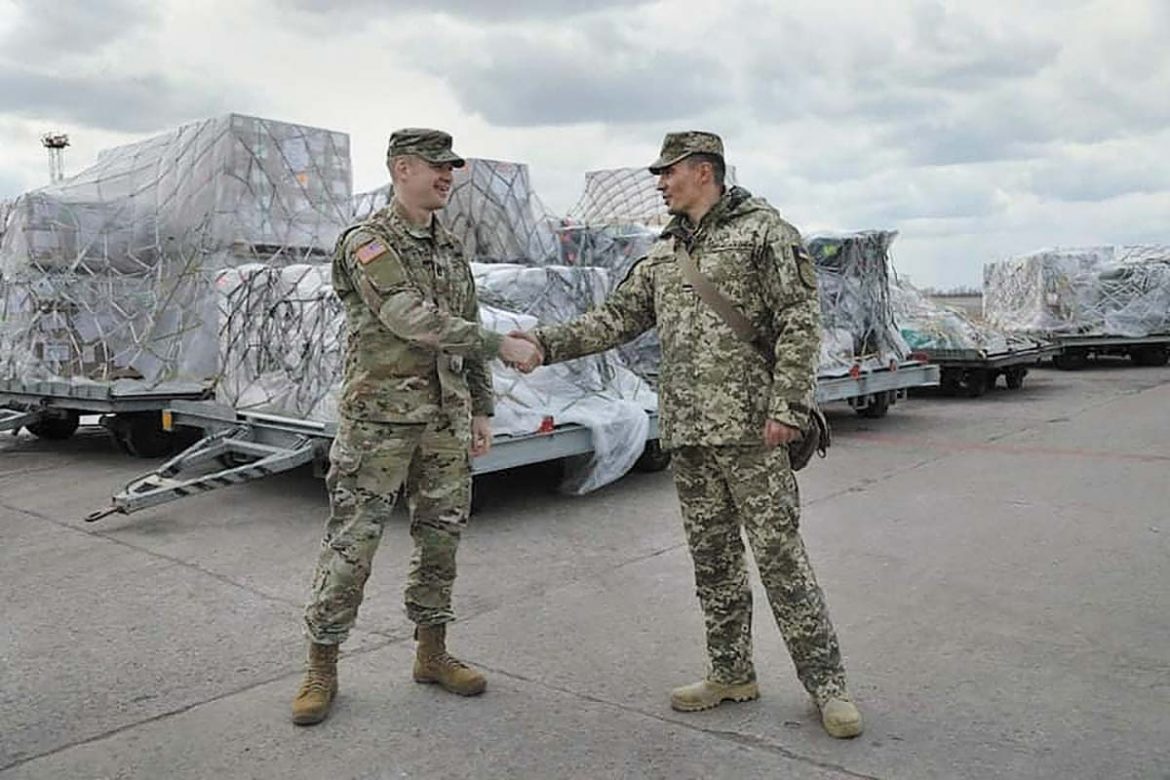 A U.S. military (left) and Ukrainian officer greet each other at Kyiv’s Boryspil Airport on April 28 upon the delivery of $7.85 billion worth of U.S. security assistance to Ukraine.

KYIV – After Russia announced that more than 100,000 soldiers were ordered back to their permanent bases on April 23 following military drills near Ukraine’s state borders and in occupied Crimea, Ukrainian President Volodymyr Zelenskyy said the threat of a full-scale war has not dissipated.

Moreover, much of the military hardware that had been shifted toward Ukraine’s state borders stayed behind and Russia’s sizable naval force remains in the Black Sea and is larger than what it was one month ago, experts noted over the past week.

While visiting Ukrainian military fortifications near Crimea on April 27, Mr. Zelenskyy said the country remains on alert because Russia’s troops could return “at any moment.”

“The fact the troops are withdrawing doesn’t mean the army should not be ready for the possibility that troops could return to our borders any moment,” he added. “We must always be ready.”

Russia’s display of military might during the recent drills near Ukraine “was nothing less than a dress rehearsal for the full-scale invasion of Ukraine,” wrote Vadym Deny­senko, executive director of the Ukrainian Institute for the Future, together with experts Ihor Popov, Ihor Tyshkevych and Ilya Kusa.

They added that “much of this potential future invasion force remains in position and poised for action.”

Russian Defense Minister Sergei Shoigu in particular ordered that “weapons and equipment” are to remain at a military training base 250 kilometers (155 miles) north of Luhansk Oblast leading up to and through the September Zapad 2021 large-scale military drills, an analysis by the Center for Strategic and International Studies said this week.

This development unsettles Viktor Muzhenko, who was the chief of the general staff of the Ukrainian Armed Forces in 2014-2019. In an interview with local media, he said Russia held drills and left behind hardware, which takes longer to transport than troops, just weeks before the five-day war with Georgia in 2008. The outcome was that Tbilisi lost its South Ossetia and Abkhazia regions to de-facto Russian control.

“We…must understand that such a precedent has already existed in recent history. We are talking about the ‘Caucasus-2008’ drills,” Mr. Muzhenko said. “Then, in my opinion, on July 23, [2008], the exercises were completed, the return of military units to permanent locations was also announced, and in fact, two weeks later, on August 8, 2008, active actions of Russian troops against Georgia began.”

At sea, Russia has kept in place through October unilateral maritime “exclusion zones around Crimea [in the Black Sea] beyond those it earlier imposed in the Sea of Azov,” an analysis by expert Paul Goble said in the Washington-based Jamestown Foundation.

Ukraine says Russia blocking foreign naval and state vessels is a violation of international law and a bilateral agreement with Moscow for common use of the waterways they share.

This naval force consists “of up to 25 ships…[and] is capable of landing some 5,000 marines and then providing them with support both from the sea and via naval aviation,” Mr. Goble wrote. “This force had and retains a significant landing capability, suggesting Ukraine remains in Moscow’s crosshairs from the sea if not immediately from land.”

Meanwhile, Mr. Zelenskyy twice over the past week reiterated his desire to hold bilateral talks with his Russian counterpart Vladimir Putin, who has eschewed phone calls from Kyiv and rejected the prospect of such a meeting taking place to ease tensions and achieve peace.

Speaking to The Financial Times, the Ukrainian leader said: “we don’t care about the venue, it’s about the substance.”

In an interview with Italian newspaper La Repubblica, Mr. Zelenskyy said a meeting with Mr. Putin at the Vatican “would be ideal.”

The Kremlin has responded to the Ukrainian president’s entreaties with disdain. Mr. Putin intimated that Russia isn’t involved in the Donbas, despite overwhelming evidence to the contrary, while speaking to local media. He insisted over the week that Mr. Zelenskyy should speak to the Russian proxies in the occupied parts of Luhansk and Donetsk oblasts before the idea of extending an invitation to his Ukrainian counterpart would be entertained.

In turn, Mr. Zelenskyy told The Financial Times that he has “no intention of talking to terrorists and it is just impossible for me in my position.”

Kremlin spokesman Dmitry Peskov inferred a similar message this week, telling reporters that only “issues of bilateral relations” could be discussed, not on the basis “of seeking a settlement in southeastern Ukraine,” implying that Russian troops aren’t in the Donbas and that the seizure of Crimea is a fait accompli.

To ease tensions and bring new life to a stalled peace process stemming from two roadmaps reached in Minsk in 2014-2015, Mr. Zelenskyy proposed changing the agreement to reflect the current reality on the ground.

“I’m now participating in the process that was designed before my time,” he told FT. “The Minsk process should be more flexible in this situation. It should serve the purposes of today, not of the past.”

Mr. Zelenskyy also proposed to expand the Normandy format, consisting of Germany, France, Ukraine and Russia, who took part in brokering the current roadmap for peace that never took hold.

He said the addition of the U.S., Britain and Canada would be welcome.

Still, tensions remain as daily shootings take place in the Donbas with one Ukrainian soldier being killed and three wounded on April 27 when their military vehicle drove over an explosive device in the combat zone. More than 14,000 people have been killed since Russia covertly invaded the country in early 2014.

A Russian lawmaker said that nearly 1 million residents of the occupied parts of the Donbas would have Russian passports by the end of the year, alerting Kyiv’s political leadership further. Mr. Putin has previously said that protecting “Russian citizens everywhere” is a Russian foreign policy priority.

And the Kremlin announced it is drafting a list of countries it says are “unfriendly” to Russia, a designation which will entail a reduction in their diplomatic corps. 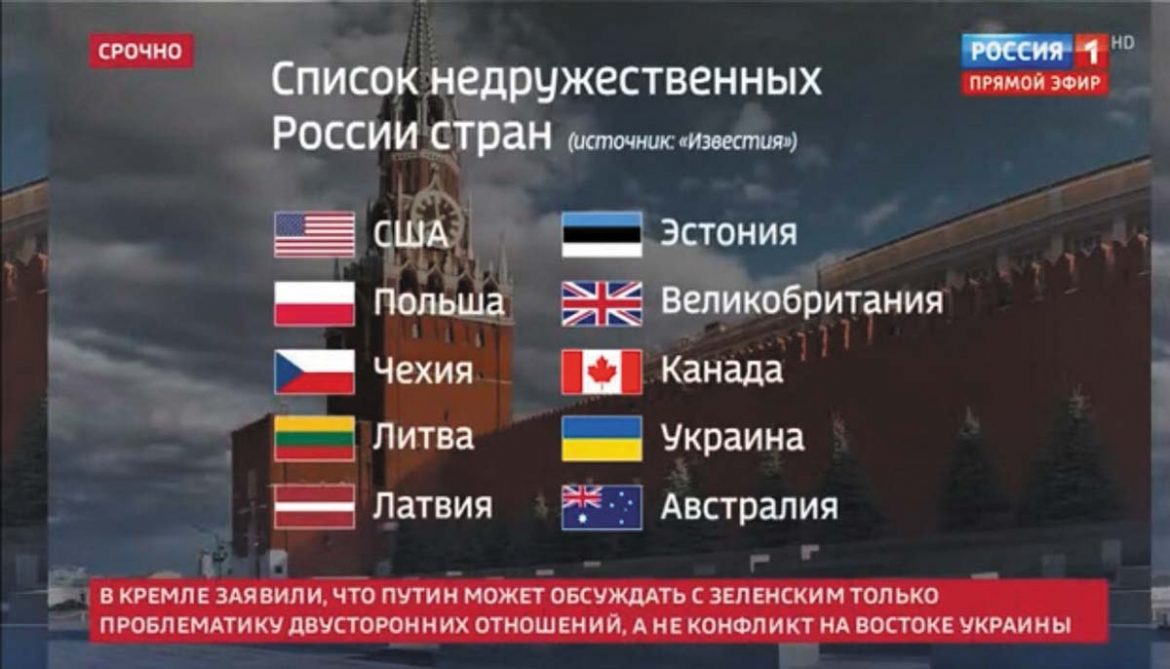 A screenshot of a Russian television channel showing a list of countries that Russia will designate as “unfriendly.”

The Ukrainian Weekly monitored Russian state-controlled TV channels, during which time Rossiya 1 leaked a partial list of countries Moscow deems hostile that soon will be approved by the government.

Among them are Ukraine and Georgia, with whom Russia has or is waging war, as well as the U.S., Britain, Canada and Australia, all of whom have imposed sanctions on Russia.

What Russia managed to achieve when it amassed its forces near Ukraine’s border earlier this month was strategic, he said. Mr. Putin has, among other accomplishments, managed to test Ukraine’s and the West’s reaction while “keeping in place many of the forces brought in who are in readiness to reactivate,” Mr. Grant said.