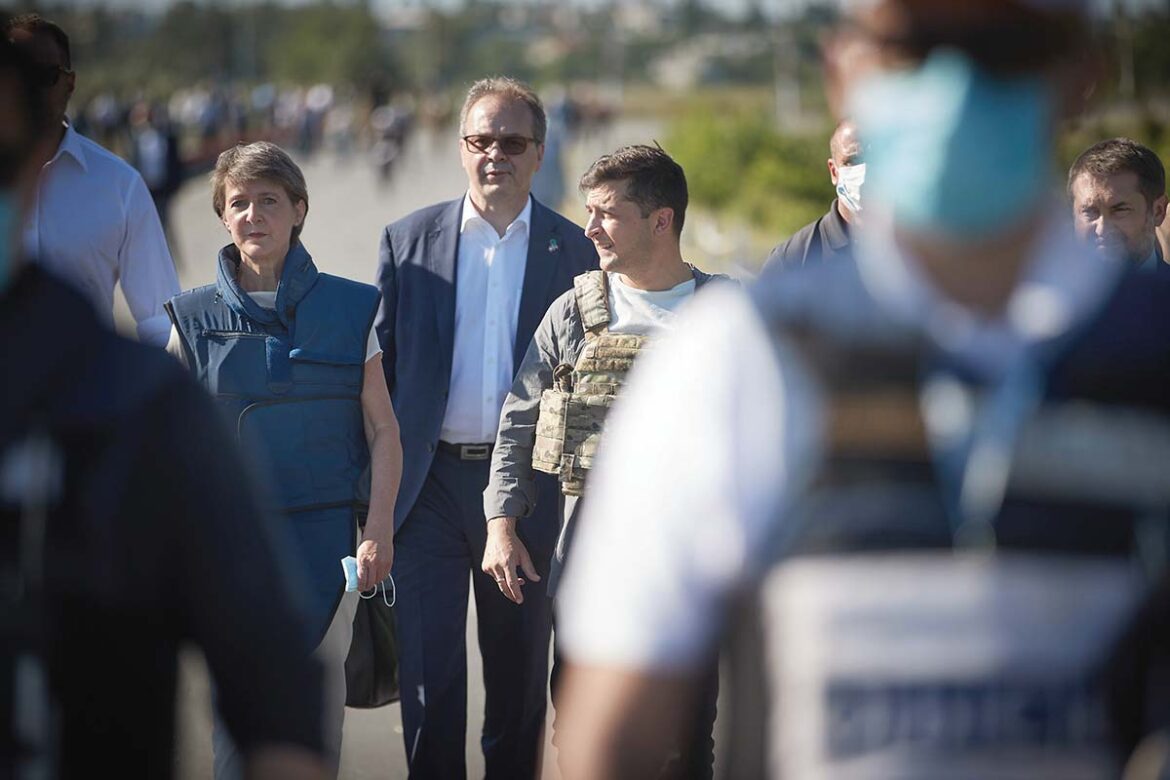 President Volodymyr Zelenskyy at the Stanytsia Luhanska checkpoint with the president of the Swiss Confederation, Simonetta Sommaruga, during a working visit to the Donbas on July 23, four days before a ceasefire went into effect in the region.

KYIV – As of 12:01 a.m. on July 27, a full and comprehensive ceasefire went into effect in the area of armed conflict in the Donbas region. The decision was adopted on July 22, at a regular meeting of the Trilateral Contact Group (Ukraine, Russia and the Organization for Security and Coooperation in Europe). All parties approved the ceasefire agreement, however, Russian proxies fired upon Ukrainian positions at 12:20 a.m. – 19 minutes after the start of the ceasefire.

As of 7:30 p.m. on July 27, the OSCE Special Monitoring Mission recorded 111 ceasefire violations in the Donetsk region, including 21 explosions. According to the commander-in-chief of the Joint Forces, Volodymyr Kravchenko, the Ukrainian armed forces did not respond to the shelling.

The first deputy head of Ukraine’s delegation to the Trilateral Contact Group (TCG), Deputy Prime Minister Oleksii Reznikov, said he believes that it is not yet necessary to speak of “ceasefire violations” and noted that the cases of shelling should be investigated with the OSCE’s participation.

“Right now, everyone is worried about the information that the shots allegedly took place – exact confirmation about which we expect. But I would suggest that this does not mean a violation of the ceasefire,” said Mr. Reznikov. “It means that there are facts of violations… This case is subject to investigation and disciplinary action if it is a malicious violation.”

The deputy prime minister, who is also the minister for reintegration of the temporarily occupied territories of Ukraine, said he remains optimistic about the situation and believes there is still a chance for a truce. Nonetheless, he stressed that, if these are not “accidental, isolated violations of the regime of silence,” but real aggression, which violates the measures agreed upon by the TCG, the Ukrainian military will use Article 40 of the Hague Convention of 1907 on the Laws and Customs of War. The article clearly states that, if one of the parties violates the armistice, the other can automatically withdraw from it and resume hostilities.

Earlier, the Presidential Office had called the decision on a ceasefire in the Donbas a breakthrough in the work of the TCG and praised Ukraine’s international partners in Berlin and Paris. Ukraine has reaffirmed its full willingness to comply with the agreements. The regime of a full and comprehensive ceasefire, if observed by the other party, is a fundamental precondition for implementing the Minsk agreements, which paves the way for the implementation of other provisions of these agreements.

Ukraine’s position is that elections in the temporarily occupied territories are possible only after a comprehensive de-escalation, the withdrawal of foreign military units and equipment, the disarmament of illegal armed groups and restoration of control over the Ukrainian-Russian border by the government of Ukraine. The agreements do not foresee any compromises regarding elections in the Donbas. Elections must be held in accordance with the legislation of Ukraine and under OSCE Copenhagen standards. Ukraine hopes that implementation of all agreements will make the next summit of the Normandy Four in Berlin possible.

“We have a lot of professionals in constant negotiations in the format of meetings of the Trilateral Contact Group, and who have agreed on a very serious step for our whole country – a permanent ceasefire. This document is now awaiting signing by all parties to the Normandy Group. I believe that all parties – Ukraine, France, Germany and Russia – will sign it. I believe the time may come when there will be a permanent ceasefire,” President Volodymyr Zelenskyy told the news media near the Stanytsia Luhanska checkpoint during a working trip to the Donbas on July 23. The president noted that Ukraine is fulfilling its part of the Minsk agreements, and the whole world sees this. The other party also must also demonstrate the willingness to comply with them, he added.

Ukrainian Defense Minister Andriy Taran pointed out that Article 51 of the United Nations Charter gives a country the right to defend itself. At the same time, he stressed that Ukraine has the political will to achieve a permanent ceasefire, and he expressed hope that the other side will also be able to demonstrate this.

On the eve of the ceasefire, on July 26, President Zelenskyy had a phone conversation with Russian Federation President Vladimir Putin. The two leaders discussed the implementation of the agreements reached during the Normandy Summit on December 9, 2019, in Paris. Mr. Zelenskyy brought up security issues in the Donbas. According to information from the Presidential Office of Ukraine, Mr. Putin supported the ceasefire agreement. The leaders agreed on the necessity to implement additional measures to maintain a ceasefire in the Donbas.

However, the very next day, Dmitry Peskov, a spokesman for the Russian president, said that Russia could not guarantee compliance with the ceasefire in the Donbas because it is not a party to the conflict, as reported by the Russian news agency TASS. According to Mr. Putin’s spokesman, the agreement on an indefinite truce in Donbas is “a significant and positive step towards strengthening mutual trust and easing tensions on the line of contact.”

According to the Presidential Office of Ukraine, in their phone call the Ukrainian and Russian presidents also discussed the Law on the Special Procedure for Local Self-Government in Certain Districts of the Donetsk and Luhansk Regions, and the Law on Decentralization, which provides for amendments to the Constitution of Ukraine.

Numerous experts and observers have criticized Mr. Zelenskyy for discussing changes in Ukraine’s legislation with the Russian president, arguing that Mr. Putin must not have any influence on the Constitution of Ukraine. Federalization and a special status for the Donbas region, they say, are in keeping with the Kremlin’s scenario and were a part of its plan before the start of Russian armed aggression.

The fact that these topics were discussed by the two presidents, as well as violations of the ceasefire, sparked protests in Kyiv in front of the Presidential Office and on Independence Square (Maidan Nezalezh­nosty).

On July 28, former Ukrainian President Leonid Kuchma announced that he is resigning as the head of the Ukrainian delegation to the Trilateral Contact Group. Mr. Zelenskyy stressed that Mr. Kuchma’s work in the Minsk process was extremely important and, at the same time, difficult. The president added that he respects Mr. Kuchma’s decision to end his participation in the TCG.

“Thank you for all the efforts you have made to unblock the Minsk process to achieve peace. Your experience was crucial and essential. I am always ready to listen to your advice in the future,” President Zelenskyy said during a meeting with Mr. Kuchma on July 28.

For his part, the former president of Ukraine noted that the work of the TCG had resumed and advanced significantly during the past year. Several important steps have been taken, and necessary agreements have been reached, he said. Mr. Kuchma stated that he is ready to share his experience and provide consultations on steps towards peace.

“When we know exactly how difficult this work is, the choice of a person who can lead the Ukrainian delegation in the Trilateral Contact Group is just as difficult. We need to find a balance,” President Zelenskyy said on July 29. “A person Russia is talking to, a person who is – most importantly – respected in Ukraine. A person who can dominate at the negotiating table. A person who can react, who will not betray Ukraine in challenging moments. Our territorial integrity, our sovereignty are at stake. Hence, not only our present but also the future of Ukraine,” he said at a briefing.

“There will be a leader, and people together with the leader of the delegation of Ukraine must be one team. Therefore, in the coming days, there will be an official confirmation of this or that person,” Mr. Zelenskyy said.