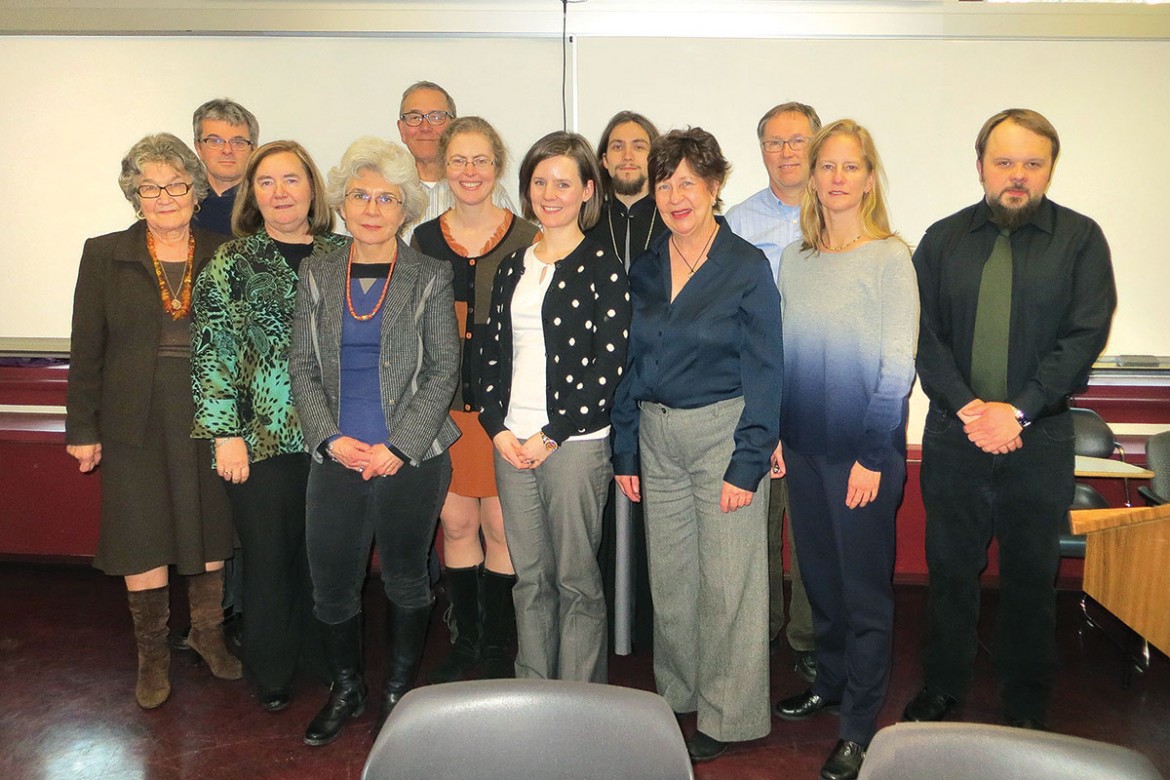 Present at the workshop were John-Paul Himka and Frances Swyripa, both from the Department of History and Classics at the University of Alberta, and Natalie Kononenko, Department of Modern Languages and Cultural Studies and the workshop organizer.

The workshop was sponsored by a grant from the Killam Foundation through its Connection Program. Additional support came from the Kule Chair in Ukrainian Ethnography and the Canadian Institute for Ukrainian Studies.

The workshop began with opening remarks from Prof. Kononenko who spoke about similar workshops, one held earlier in Winnipeg and one planned for Saskatoon. Prof. Himka described the Sanctuary Project and its work. To date Sanctuary has conducted systematic photo documentation of Byzantine rite churches in Alberta and Saskatchewan, accompanied by interviews that describe ritual practices.

The representatives of the clergy talked about issues such as preserving church records and maintaining religious devotion. Mmes. Cyncar, Harasymiw, and Kohut gave historical information about their respective museums and described acquisition policies with Ms. Harasymiw pointing out that their mission was to collect items from Ukraine as well as Canada.

It was pointed out that the Basilian Fathers Museum in Mundare is unique because it does more than acquire objects to be used for display and research. The museum accepts all sacred objects, keeping a select few for the museum, sending some to churches that are in need of particular items, and destroying those items which cannot be kept in a manner that befits the fact that these are sanctified objects.

The afternoon was devoted to discussion and the formulation of workshop resolutions. The need to help rural communities and their parishes came up as a topic repeatedly, and Prof. Swyripa and Ms. Lemiski will write a small guidebook outlining best practices for dealing with sacred objects.

As the Sanctuary database is built and goes online, links will be made on that website to the resources provided by the Historical Resources Management Branch of Alberta Culture and Tourism, the Alberta Museums Association and the Royal Alberta Museum, guiding interested parties directly to support services.

The large museums attending the workshop appealed to the church communities involved to ensure that the appropriate authorities approve and sign the museum gifting agreements when a donation is made. They were encouraged to institute the use of internal release forms to help avoid conflicts over object ownership once the transaction is complete.

An e-mail list was compiled and circulated to help workshop attendees stay in touch. The need for continued dialogue is great, and the workshop was a first step toward meeting the spiritual and heritage needs of Alberta’s faith-based communities.