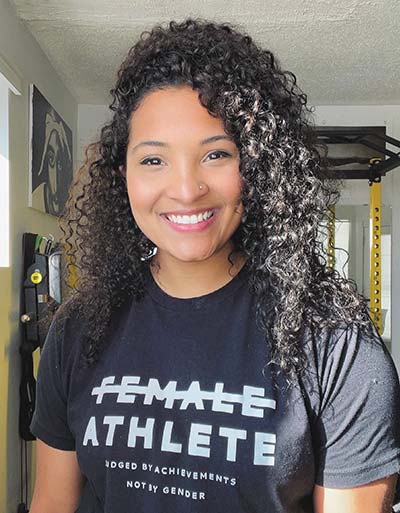 Saroya Tinker in a photo taken on International Women’s Day on March 8.

It was only a little over a decade ago that a 12-year-old girl in Oshawa, Ontario, suffered through the trauma associated with being told by a teammate to, “Shut up, you stupid n—–,” in a hockey arena’s dressing room. This, of course, was not the first time Saroya Tinker experienced the disgust of racism. The first times go back to when she was a little girl on the ice who was occasionally shunned by her fellow skaters, made to sit in a certain area of the dressing room and not always included in off-ice activities. Sometimes the racism was more covert and ignorant, like the time her Ukrainian Canadian mother, Mandy, was asked which girl was her daughter, and when she pointed Tinker out, she was told, “Crossbreeds make the best athletes.” Tinker, whose father is Jamaican, still has difficulty comprehending that the episode really happened.

One would surmise things would get better at an institution like Yale University, a respected fortress of higher education with centuries of history where keen young minds go to be broadened and enriched. Yet even after starring for four years on the ice at Yale, Tinker’s overall experience there was far from great. Her stay at school did not live up to her expectations, in part because she still felt like an outsider. It did ultimately make her stronger as a human being.

It eventually got to the point where Tinker wondered if continuing to play the sport of hockey was worth the struggles. She decided it was, for which the National Women’s Hockey League (NWHL), the Metropolitan Riveters and the Black Girl Hockey Club are all very grateful. The Riveters drafted her fourth overall in 2020 and utilized her talents in their drastically shortened season. The Black Girls Hockey Club is incredibly grateful Tinker stayed with her sport because she took on a leading role in the advocacy group, using her platform to raise awareness and funds.

She went even further, establishing a mentorship program through the Black Girls Hockey Club for girls aged 8 to 17 who can take advantage of Tinker’s experience and knowledge via Zoom workouts, nutritional advice and newsletters.

Upon entering the ill-fated NWHL bubble with the Riveters this past January, Tinker established a GoFundMe initiative for the Black Girls Hockey Club Scholarship Fund, with a goal of raising $5,000. When she finally shut it down in March, the initiative had reached nearly $31,000, which is being dispersed in $1,000, $3,000 and $5,000 installments to BIPOC hockey-playing girls from Toronto to Kenya, helping them cover any playing costs (BIPOC = Black, Indigenous, People of Color). Thanks in large part to her efforts, each player who applied for a scholarship received at least $1,000. Tinker cried tears of joy because she was amazed that people supported her initiative, that people hear what she’s saying and that her voice is being heard.

Her voice was heard loudly and clearly when the Riveters and Tinker found themselves in some controversy when two Riveters players were featured on the Barstool Sports podcast in January.  Fans of women’s hockey raised concerns about any association between the NWHL and the Barstool Sports website, which has a well-documented history of misogynistic and racially insensitive conduct.

Tinker was quick to condemn Barstool on Twitter, saying Barstool is an “openly racist platform” that “promotes…white supremacy” and told them to keep their money. This prompted Barstool to attack Tinker, saying she should go to jail for her reactive tweet.

There was severe blowback from Barstool followers and internal team conflict between the two Riveters players who were guests on the podcast and teammate Tinker. Some of the things said on social media were described as disgusting.

For her part, Tinker talks a lot now about being a new, unapologetic version of herself. The little girl who was stunned speechless when called the N-word by a teammate has found her voice, using it in any way possible. It could be as an advocate for a safe space for BIPOC girls and women in hockey or calling out those whose mindset is in conflict with that goal, Tinker is now confident, bold and daring to step out of her comfort zone. She has learned to love herself and care much less about what other people may think of her, instead steadfastly standing up for what she truly believes is right.

Her Ukrainian mom, Mandy, could not be prouder.

“As a parent, it has honestly been so amazing to see our daughter grow up to be such an incredible human being on and off the ice,” Mandy said. “Her struggles with fitting in at hockey definitely weren’t easy to see her go through, but she always handled things with such grace and integrity.”

Mandy also is thrilled with how her daughter uses her platform through hockey to advocate for communities who need assistance.

“She has become such an incredibly strong voice for the BIPOC community on and off the ice. We love to see it. Despite her struggles, she has turned them into triumphs and it is so encouraging to see her grow and use her voice for good and to affect change.”

Not to be forgotten is that this young lady happens to be a very good hockey player. At 5-foot-9 and 155 pounds, Tinker refined her game during her four years at Yale, developing into a defensive defender who excels on the penalty kill. She earned a silver medal at the Women’s Under-18 World Championship in 2016 representing Team Canada. Not the fastest skater on the team, she does possess the smarts to be an elite shutdown player.

If the NWHL continues, Tinker is seen as a potential star player as a dominant defender, physically strong and very committed. Mark Bolding, her former coach at Yale, references Tinker as a “high-end hockey mind,” with a unique understanding of the game’s flow, likely the reason why she defends so capably. When she first got to Yale, she was more of a rushing defender, but had to adapt and become more of a defensive, stay-at-home defender. Her coaches have always leaned heavily on her to kill penalties.

Interestingly, while her game is more grinding and defensive, off the ice Saroya Tinker has some artistic pizazz. When she’s not playing hockey or working with the Black Girl Hockey Club, Tinker trains in Calgary with her partner, Dante Djan, a Canadian college football quarterback. Tinker supplements her NWHL salary by selling artwork she creates with oil paint on canvas. She paints portraits of nude men and women, as well as some favorite music artists like Lauren Hill and Tupac Shakur. Her paintings are usually large in size and typically sell for between $300 and $1,000 each.

Whether the canvas is the ice, the public domain or an actual painter’s canvas, Saroya Tinker will go big and take chances. The portrait of the artist as a young woman who plays hockey is still a work in progress, although there is much to be excited about for her, both on the ice and in the social justice arena.

(Above quotes courtesy of the Oshawa Generals hockey club.)