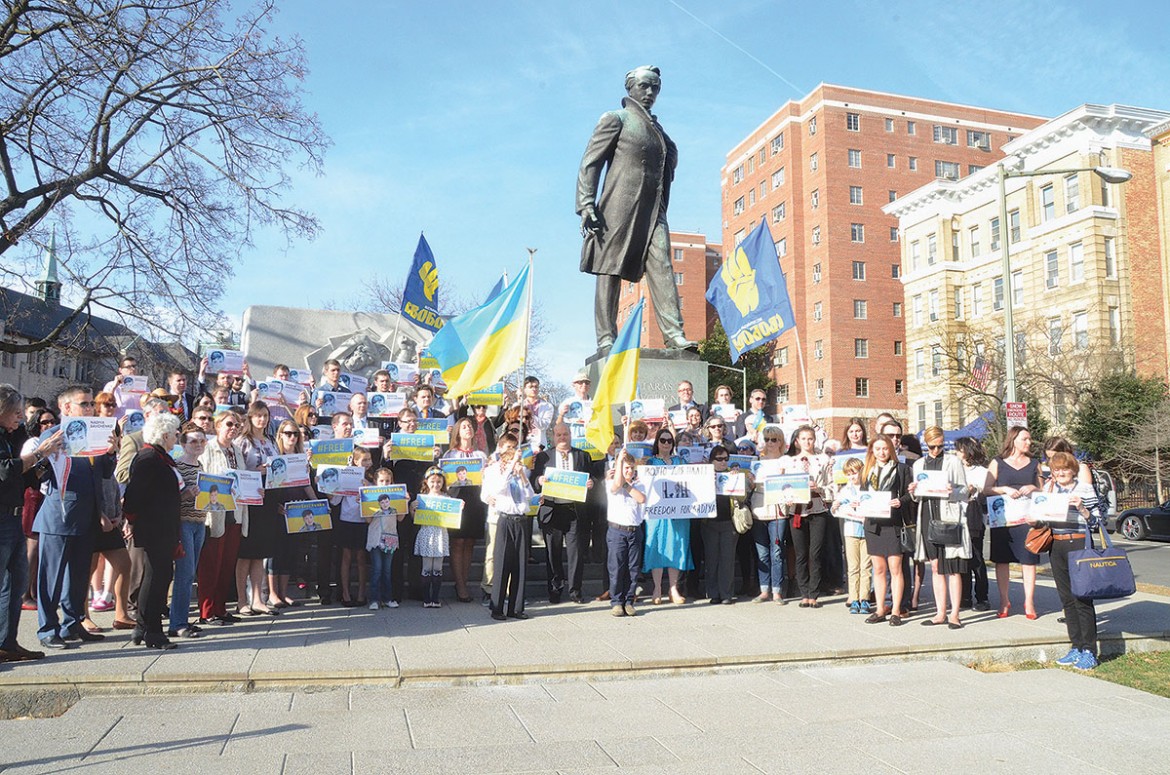 A large group of Ukrainian Americans gathered at the Taras Shevchenko monument in Washington on March 9 for the Ukrainian Embassy’s annual celebration of the Ukrainian poet laureate’s birthday and, as Ambassador Valeriy Chaly stressed in his ceremonial remarks, to protest the Russian imprisonment and soon-expected conviction of Nadiya Savchenko. Afterwards, a small group went on to continue the protest in front of the Russian ambassador’s official residence.

KYIV – Imprisoned Ukrainian military pilot Nadiya Savchenko again drew international attention and support after declaring a hunger strike on March 3 when the judge in her trial denied her the opportunity to read her final statement.

She reportedly refused food and water for six days, starting on March 4, before announcing on March 10 that she would begin drinking water again, relieving worldwide concern that she would die in a Russian jail. Yet she continued to refuse food, marking the seventh such hunger strike since her imprisonment in July 2014.

Upon announcing her decision to accept water, Ms. Savchenko claimed victory in that her dry hunger strike had prompted the judge to move the verdict closer to March 21, as was announced at a March 9 hearing during which Ms. Savchenko declared her contempt for the court.

“With my example, I want to demonstrate that the totalitarian regime in Russia can be destroyed! Here are my last words,” she said in a shouting rant, before fiercely displaying her middle finger towards the judge.

Her passionate outburst was in spite of her desperate medical condition, as described by her mother, who reportedly was able to visit her that day for only seconds.

“I went to Nadiya today, held her hands. So blue, so very cold that they lack blood. Her legs are swelling. That means her heart, her kidneys are giving up,” Maria Savchenko told reporters.

Ms. Savchenko’s latest fast, yet again bringing her to the brink of death, drew an unprecedented flood of appeals from the world’s leaders to Russian President Vladimir Putin to release Ms. Savchenko and drop the criminal charges against her, widely accepted as fabricated. She’s accused of complicity in the deaths of two Russian journalists and is likely to receive the maximum sentence of 23 years imprisonment.

Among leaders rallying for her release were U.S. Vice President Joe Biden, U.S. Secretary of State John Kerry, EU High Representative for Foreign Affairs and Security Policy Federica Mogherini, U.S. Permanent Representative to the United Nations Samantha Power and more than 20 foreign ministers, as well as 57 members of the European Parliament, who signed an appeal calling for personal sanctions – including blocking access to bank accounts and seizing property – against 28 Russian and Ukrainian citizens responsible for Ms. Savchenko’s imprisonment.

“We, the members of the European Parliament, are convinced that the EU must with no further delay react to this repeatedly shameful and blatant breach of international law and the Minsk agreements by the Russian Federation,” said the March 8 appeal.

Protest rallies erupted this week throughout the world, including Moscow, where 37 were arrested, and St. Petersburg, where eight were arrested, according to the pravda.com.ua website. The Russian Embassy in Kyiv was pelted with eggs, rocks, bottles with iodine and Molotov cocktails.

The passionate reactions were triggered also by the March 9 report by Ms. Savchenko’s lawyer Nikolai Polozov that the Russian government forbade Ukrainian doctors to enter the country to visit Ms. Savchenko.

Russian Foreign Affairs Minister Sergei Lavrov even blamed Ms. Savchenko’s “insolent behavior in court” on March 9, during which she raised her middle finger at the judge, for the decision to not allow the doctors to see her.

The same morning, three national deputies of the Batkivshchyna party, which helped elect Ms. Savchenko to the Ukrainian Parliament, were detained by Russian authorities in Moscow and released only when their connecting flight had already departed to Rostov-on-Don, where the trial was being held. These deputies were Alyona Shkrum, Alex Ryabchyn and Ivan Krulko.

The underhandedness of Russian authorities, however, reached an unprecedented low when Mark Feygin, another lawyer for Ms. Savchenko, announced on the morning of March 10 that Ukrainian President Petro Poroshenko sent a letter pleading with her to end her hunger strike and even offering her a government post.

He posted a photo of the letter on his Twitter account, along with the comment, “I just came from Nadiya. She ended her hunger strike at the request of President Petro Poroshenko and her fellow citizens.”

That afternoon, Mr. Feygin returned to Twitter only to announce that the letter he received was a fake, which was confirmed by the president’s press secretary. Mr. Poroshenko had expressed his support verbally to Ms. Savchenko’s mother and sister, but didn’t write any letter, the press secretary said.

In another tweet that afternoon, Mr. Feygin concluded that the Russian Security Service (FSB) had hatched the subterfuge to discredit Ms. Savchenko and get her to end her hunger strike, which was drawing international attention and pressure on the Russian government.

“The Kremlin is busy with discrediting others, including Savchenko herself and her lawyers. Instead of resolving the issue of an exchange, the intelligence services are playing with the life of Savchenko and leading the consul general of Ukraine, the press service of the president and myself into mistaken belief,” the tweet said, referring to the president’s proposal the prior day in which he offered an exchange for Ms. Savchenko.

In that same statement, Mr. Poroshenko said he never received an exchange offer for Ms. Savchenko.

Vira Savchenko said on March 10 that her imprisoned sister would renew her hunger strike without water once the verdict is announced.

Ms. Savchenko’s condition is such that she can’t survive more than a week without water, said Natalia Kharchenko, a Ukrainian doctor who examined Ms. Savchenko during a nearly three-month hunger strike last year.

“It’s one thing if a healthy person conducts a hunger strike. At the start of her fast without water, Nadiya was weakened after her lack of food, with chronic stress from her previous fasts,” she told the 1+1 television network.