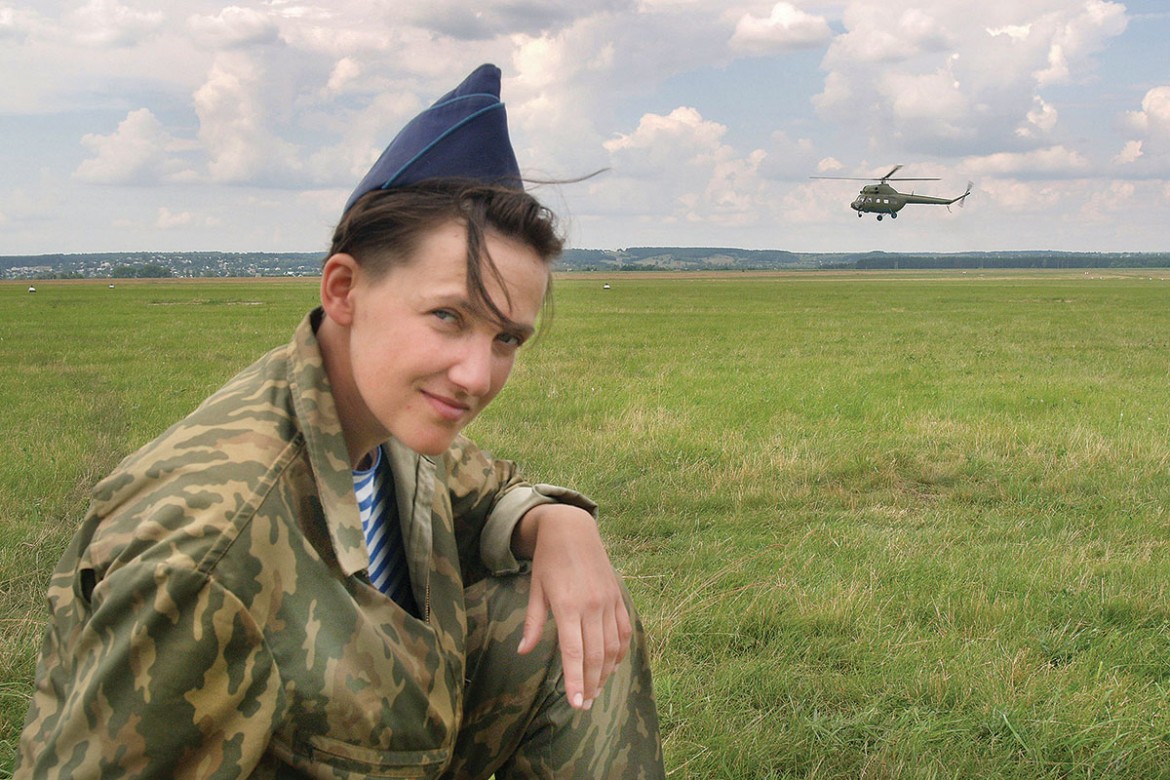 Nadiya Savchenko in a photo from 2008, when she was a student at the Ivan Kozhedub Air Force University of Kharkiv.

KYIV – Nadiya Savchenko, the Ukrainian military pilot who has become the nation’s globally recognized symbol of resistance to Russian aggression, was found guilty on March 22 by a Russian court of participating in the murder of two Russian journalists and illegally crossing the Russian border.

She was sentenced to 22 years imprisonment in a penal colony – a year short of the maximum sentence. Striking an especially cynical tone, the court fined Ms. Savchenko 30,000 rubles ($443) for violating the border.

The United States and the European Union condemned the verdict and called for Ms. Savchenko’s immediate release, reiterating the widely accepted view that the criminal charges were fabricated by the Russian government as part of its information war against Ukraine.

The conviction and sentencing “show a blatant disregard for the principles of justice and contravene Russia’s commitments under the Minsk agreements,” said U.S. State Department Spokesman John Kirby. “For nearly two years, Russia has unjustly detained Savchenko on charges that have no basis in fact and has denied her basic protections of the rule of law. She has reportedly endured interrogation, solitary confinement and forced ‘psychiatric evaluation.’ ”

Yet just as disconcerting as the sentencing is what might come next. Ms. Savchenko insisted that her lawyers not appeal the verdict within the 10 days allowed by Russian law because that would delay its taking effect.

Her reasoning is that the sooner the verdict becomes official, the sooner diplomatic talks will begin regarding release to Ukraine, said Ms. Savchenko’s lawyer Mark Feygin, as reported by the Ukrainian media.

The consequence of that is the case would not reach review by the European Court for Human Rights in Strasbourg, said Mr. Feygin, adding that he provided a back-up plan by filing numerous claims internationally seeking her release, including with the United Nations.

“Since Russia doesn’t recognize the rulings of international courts, there’s no assurance that a Strasbourg ruling would have led to her release anyhow,” said Volodymyr Horbach, a political analyst at the Institute of Euro-Atlantic Cooperation.

Meanwhile, Ms. Savchenko announced she plans to launch her latest hunger strike, refusing even water, once the 10-day appeal period expires, potentially placing her life in danger yet again.

“I’m not going to sit here for even a day. After the verdict takes effect, a hunger strike without water and that’s it. That’s my final decision,” she said on March 21, before the first hearing at which the reading of the verdict was begun.

Another Savchenko lawyer, Nikolai Polozov, said she told him she’s ready to return to Ukraine dead or alive.

“We have the chance during these 10 days to convince her not to take this step,” he said, as reported by Ukrainian media. “But experience has shown she listens to few people, and I’m afraid our pleas won’t be successful this time.”

The Savchenko verdict would have been the biggest news event that day in Europe if not for the terrorist attacks in Brussels committed by radical Islamists that killed 34 and injured more than 230.

The timing of the attacks – on the same day as the verdict – led the Security Service of Ukraine (SBU) to suspect that the Russian government could have played a role in order to distract the public’s attention from the day’s events in Rostov-on-Don.

“I won’t be surprised if this is an element of Russia’s hybrid war,” SBU chief Vasyl Hrytsak said during a March 22 lecture at the National University of Kyiv-Mohyla Academy. The next day, he said he based this “assumption” on secret information to which he had gained access.

“These events once again stress the need for coordinating the efforts of the international community in the fight against the threat of terrorism,” Mr. Medvedev stated on his Facebook page.

The Russian penchant for name-calling extended to Ms. Savchenko’s very trial. On March 22, the judge, Leonid Stepanenko, referred to her, quoting the words of a witness, as an “impudent Banderovka” in the version cited by the fakty.ua news site. The segodnya.ua site reported the judge’s phrase as “typical Banderovka.”

Numerous scandals erupted during the two days that the verdict was read. On the morning of March 21, Russian border guards denied entry to Iryna Herashchenko, the Ukrainian president’s ombudsman for the peaceful resolution of the conflict in the Donbas. She also received notice of her ban from Russia until 2021.

Not only is Ms. Herashchenko a Ukrainian delegate to the Parliamentary Assembly of the Council of Europe (PACE), but she has participated in the Minsk peace talks. Yet the Russian Border Service informed her that she was being denied “in the interest of Russian defense capabilities and public health,” she said.

Meanwhile, Presidential Press Secretary Sviatoslav Tsegolko and eight national deputies were allowed entry after a two-hour runaround, she told reporters. Upon reaching the courthouse, the tight security measures included the opening of cigarette boxes, as well as confiscating lighters and hair spray.

Ms. Savchenko was brought to court on March 21 in a convoy of five vehicles, while the next day she was accompanied by 16 guards armed with automatic rifles. Photographs were forbidden and Ukrainian politicians and journalists had a difficult time getting into the courtroom; they resorted to fighting their way in on the second day, news reports said.

“When lawyers, consuls and Europeans began to complain about the number of provocateurs, a guard yelled, ‘Quiet! This isn’t the Maidan!’ ” said National Deputy Oleskii Ryabchin.

After a break on March 21, the Ukrainian delegation was removed, but five youths with portraits of slain journalists were allowed to remain, reported the segodnya.ua news site. Diplomats representing 13 countries were denied entry altogether and were left standing outside the court building, Mr. Ryabchin said.

It was during that break on March 21 that Ms. Savchenko made a comment that’s likely to become a Ukrainian adage at some point: “While I’m in Russia, I don’t believe anyone, fear anyone or forgive anyone.”

Her other memorable words came the next day, when during the judge’s monotone reading of the verdict she began loudly singing her own rendition of the Ukrainian folk song, “Horila Sosna,” tailored to mock the Russian court – the legitimacy of which she has steadfastly refused to recognize – and referring to events of the Maidan.

“Oh judges, judges, you are mine; Two years you prosecuted me; The tire burned, blazed; Our unit stood there,” she sang, prompting the judge to call a recess just five minutes before the verdict was going to be announced.

As for Ms. Savchenko’s future prospects, few clues are available. She could be exchanged for Russian prisoners within the framework of the Minsk peace accords after the 10-day term for an appeal expires, Russian Human Rights Ombudsman Mikhail Fedotov told reporters this week.

“The guilty verdict opened the doors to the latest exchange of pilots,” said Volodymyr Fesenko, the head of the Penta Center for Applied Political Research in Kyiv. “It could be as an exchange for the captured reconnaissance agents, as well as a wider scheme – a ‘package’ with other political agreements.”

A report even surfaced claiming the Russian government would exchange Ms. Savchenko for the ability to create a land corridor between the Rostov Oblast and Crimea, which was dismissed as “absurd” by Oleksii Melnyk, a foreign policy expert at the Razumkov Center in Kyiv.

“We need a stable link to Crimea for transporting cargo and passengers there,” said a Putin confidante in response to the Ukrainian demand for freeing hostages, as claimed by SBU advisor Yurii Tandit in an interview published on March 22.

A more realistic option was announced by Ukrainian President Petro Poroshenko that same day, when he expressed his readiness to exchange convicted Russian intelligence officers Aleksandr Aleksandrov and Yevgeny Yerofeyev once the window for appeals expires.

He said Mr. Putin told him during the Normandy format talks that Ms. Savchenko would be returned after the verdict. Such an exchange would meet the sixth point of the Minsk accords, which calls for an exchange of “all for all.”

Yet the lawyer for Mr. Yerofeyev said such an exchange can only occur if Russia formally acknowledges the verdicts of Messrs. Aleksandrov and Yerofeyev and Ukraine recognizes the Savchenko verdict. The Ukrainian president has already said that will never happen, though he’s demonstrated a pattern for making inconsistent statements.

U.S. Secretary of State John Kerry arrived in Moscow on March 23 for a three-day visit during which he will attempt to negotiate Ms. Savchenko’s release, State Department officials confirmed. His efforts come after German Foreign Affairs Minister Frank-Walter Steinmeier met with the Russian leadership on March 22 to discuss her fate. He told reporters afterwards that he hopes “all sides will be able to agree soon on a humane decision.”

Ms. Savchenko was captured by terrorists representing the self-declared Luhansk People’s Republic on June 17, 2014, near the embattled town of Shchastia.

Evidence confirms she was illegally transported to Russian territory five days later, against her will, though she was convicted for the offense of crossing the border. Moreover, she was already captive at the moment of the journalists’ deaths.

Ms. Savchenko was fighting with the Aidar volunteer battalion at the time; she declared her opposition to the military approach taken by Ukraine’s armed forces and submitted her resignation. By July 8, the Russian government announced she was incarcerated on its territory.

The verdict concluded that Ms. Savchenko was part of a group of Ukrainian fighters who planned and executed the murder of journalists Igor Korneliuk and Anton Voloshin, motivated by hate for the residents of the Luhansk region, particularly Russian speakers.

The court concluded that the organizer of the murders was Aidar founder and commander Serhii Melnychuk, currently a national deputy.

An abundance of gaps and inconsistencies marred the Russian government’s prosecution, as pointed out by Mr. Feygin, who compared the prosecution’s work to that of a sophomore university student.

Not only did Ms. Savchenko not hitchhike to Russia, as the prosecution claims, but she identified the voice of one of her Russian captors in the Luhansk region. Their involvement in Ms. Savchenko’s kidnapping was confirmed by an intercepted recording of a conversation between them, in which they refer to a “snaiperka” (female sniper) and note that their “babushka” (their code word for the FSB) was interested in the “helicopter pilot who fought in Iraq.”

Among the many legal violations cited in official reports, including a January statement by Ukraine’s Foreign Affairs Ministry, were the court’s refusal to examine official documents submitted by the defense, refusal to allow the defense to call numerous witnesses, and refusal to allow defense evidence and testimony, including video evidence that proves her innocence of the charges.

Ms. Savchenko will not serve the length of the sentence and will surely be freed, Mr. Feygin told reporters after the verdict was announced.

“If not for such a public campaign in support of Savchenko that occurred not only in Ukraine but in many other countries, then Savchenko would have been sent to the penal colony,” he said. “But thanks to this support, Savchenko won’t serve this punishment. That I guarantee you.”