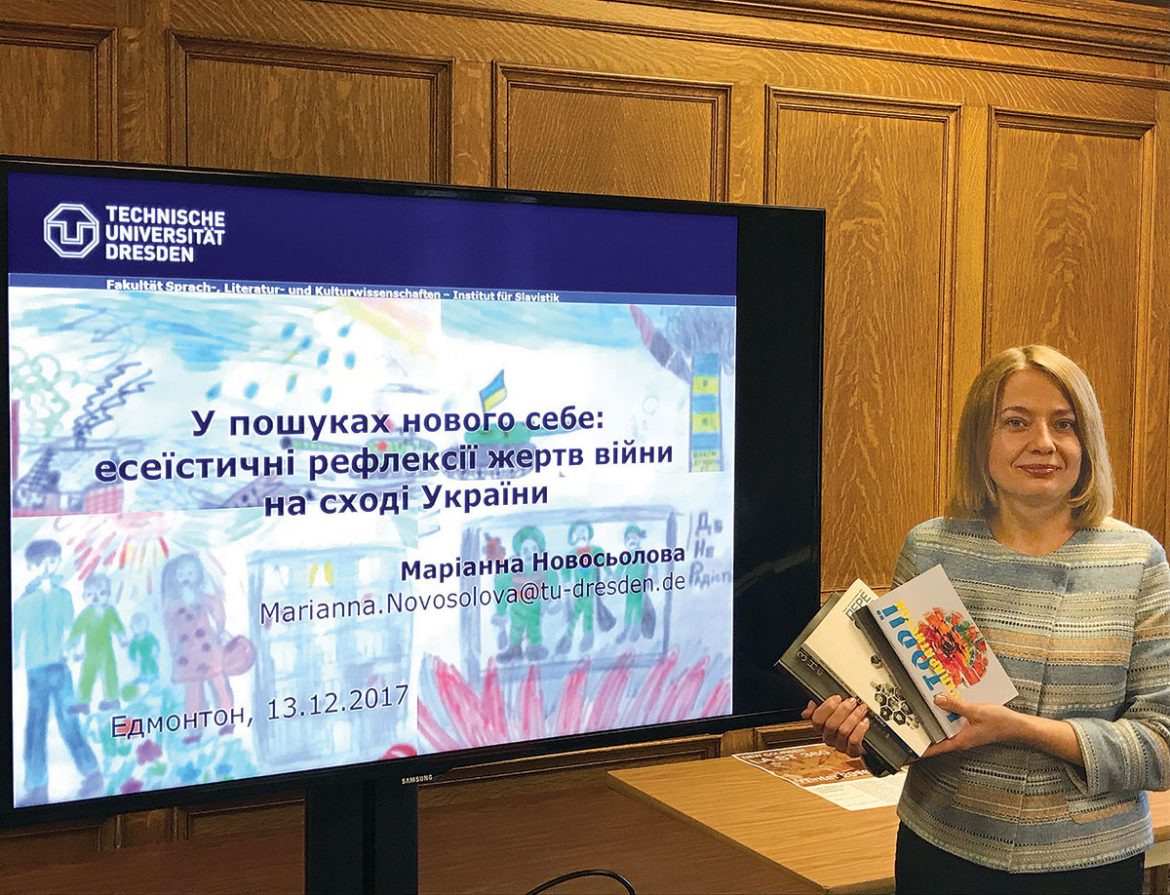 Marianna Novosolova during her lecture at the University of Alberta.

EDMONTON, Alberta – The Edmonton branch of the Shevchenko Scientific Society in Canada on December 13, 2017, sponsored a presentation by Marianna Novosolova on the topic “In Search of Their New Selves: Reflective Essays by Victims of the War in Eastern Ukraine.” This open lecture was arranged in conjunction with the University of Alberta’s Department of Modern Languages and Culture Studies (MLCS) and Ukrainian Language Education Center (ULEC) at the Canadian Institute of Ukrainian Studies, as well as the German Academic Exchange Service (DAAD).

Ms. Novosolova invited her audience to consider the fates of internally displaced persons, who were suddenly and mercilessly touched by war, forced to leave their homes and move to other regions of Ukraine in search of work and housing – but above all in search of their new selves.

Many of them, sincere Ukrainian patriots, suffer from psychological distress. On the one hand, they are vilified by those who remained in the renegade “republics” of the Donbas, branded with epithets such as “traitors,” “fascists” and “Banderites.” On the other hand, they are alienated and mistrusted by fellow Ukrainian citizens whose perception is distorted by stereotypes, resulting in a guarded attitude towards “those Donetsk people,” “separatists,” “migrants,” “bandits,” etc.

Their attempts to achieve understanding among themselves and with those around them have extended to a public expression of their reflections in essays ranging from philosophical analyses to “public confessions”; these have been published in the collections “Istoriyi Neseparaty-stok” (Non-Separatist Women’s Stories) and “Donbas – Arena Viyny” (The Donbas: Arena of War), edited by Olena Taranenko.

Ms. Novosolova provided an analysis of these small narrative forms as a singular discourse with particular motives, pragmatic strategies, argumentation, nominations and metaphorization, and described the successive transformation of identity in the forced migrants: (1) initial breakdown of social identity, caused by profound contradictions between public opinion and personal conviction, and exacerbated by the escalating idea of “outsiders”; (2) identification of outsiders as enemies and their explicit devaluation; (3) self-identification as outsiders among their own people; (4) identification of former friends as present outsiders; and (5) a sense of complete alienation and isolation.

But at the same time, she said, they have gradually overcome their identity crisis through internal reconsideration, rejection of binary notions of right and wrong, psychological empathy with other displaced victims of the military conflict, and a symbolic entry into this new identity-group.

The audience responded attentively to these issues and agreed that the combined recollections of this generation of victims of war in eastern Ukraine constitute a collective identity that is part of Ukrainian collective memory.

Ms. Novosolova holds a master’s degree in journalism. She is a doctoral student and research assistant at the Institute of Slavonic Studies at the Technical University of Dresden in Germany. Her research interests are carried out within the framework of cultural linguistics and are devoted to various aspects of discourse studies, particularly to scandal discourses. She participates in several international scientific projects and is a member of the German academic circle JungslavistInnen.

In December 2017 Ms. Novosolova was in Edmonton under an academic exchange between the Institute of Slavonic Studies at the Technical University of Dresden and the MLCS Department and ULEC at the University of Alberta.

The Ukrainian Language Education Center promotes and develops Ukrainian language education in Canada and abroad by: supporting bilingual programs and professional development of Ukrainian language teachers and instructors; creating learning and teaching resources at both the secondary and post-secondary levels; conducting research on topics related to Ukrainian-language education and related fields; and fostering international links and community engagement. For more information about ULEC, readers may visit the website at www.ualberta.ca/ulec.