Organizers, guest speakers and attendees of the second symposium on the Holodomor-Genocide at California State University, Fresno, on October 5.

FRESNO, Calif. – This year marks not only the solemn 85th anniversary of the Holodomor, the genocide perpetrated by Soviet dictator Joseph Stalin in Ukraine, but also the 65th anniversary of Raphael Lemkin’s speech, presented on September 20, 1953, which highlighted the “classic example of Soviet genocide,” characterizing it as “not simply a case of mass murder [, but as] a case of genocide, of destruction, not of individuals only, but of a culture and a nation.”

Both of these anniversaries were referenced in Senate Resolution (S. Res. 435) of October 3. On the eve of the second symposium on the Holodomor in California, the 115th Congress unanimously voted to recognize the findings of the U.S. Commission on the Ukraine Famine as submitted to Congress on April 22, 1988, including that “Joseph Stalin and those around him committed genocide against the Ukrainians in 1932-1933.” This historic resolution provided a boost to the symposium organizers in their efforts to expand the world’s knowledge of this man-made tragedy.

The symposium was held on October 5 in the Henry Madden Library at California State University, Fresno. The participants joined an international action called “Light a Candle of Remembrance,” initiated by the Ukrainian World Congress. Victoria Malko, coordinator of the Holodomor Symposium, invited the children of Holodomor survivors, Lubow Jowa, Olga Starow and Ludmila Wussek, to light candles. The audience paused in a minute of silence to remember the innocent victims – millions of men, women and children – who perished from starvation, the tool used by the totalitarian Stalinist government of the former Soviet Union in an effort to break the nation’s resistance to collectivization and Communist occupation.

The theme of the second symposium was “Women and the Holodomor-Genocide: Victims, Survivors, Perpetrators.” New research findings presented at the symposium are the first step in writing a social history of the Holodomor. In Ukraine, the “post-genocidal society” in the words of James Mace, victims and perpetrators lived side by side; they were neighbors and even family members. Reconciliation will happen once the history of genocide in Ukraine is brought to light.

The symposium opened with a poster exhibit, “We were killed because we are Ukrainians,” curated by Yana Hrynko, on loan from the Holodomor Victims Memorial National Museum in Kyiv. The purpose of the documentary exhibit was to show the Holodomor as a process, not a phenomenon, and to tell the history of the Holodomor as a story of the genocide against the Ukrainian nation through the prism of the United Nations Convention on the Prevention and Punishment of the Crime of Genocide.

Renowned speakers from Canada, Italy, the United Kingdom and Ukraine shared their new research findings. Myroslava Antonovych, director of the Center for International Human Rights at the National University of Kyiv-Mohyla Academy in Ukraine, discussed a victimological aspect of the Holodomor as a crime of genocide. Dr. Antonovych argued that Ukrainian women and children comprised the vast majority of the Holodomor victims, that the targeted group had a national character and suffered from conditions of life calculated to bring about its physical destruction.

In her analysis, she focused on the three techniques of genocide: the biological, physical, and cultural eradication of the Ukrainian nation. Dr. Antonovych clarified differences between broad (as a four-pronged attack, based on Lemkin’s concept) and narrow (as the Famine of 1932-1933) definitions of the Holodomor as genocide and challenged her opponents to grapple with a more refined conceptualization of the term “perpetrators” and legal responsibility for their acts. 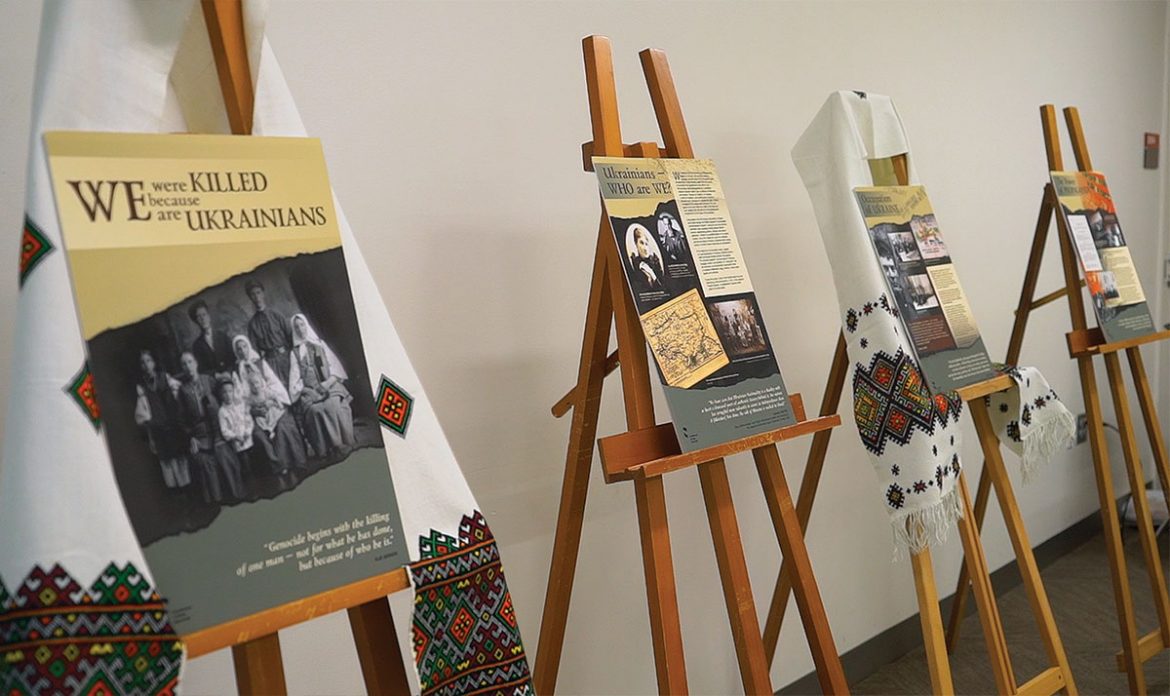 The poster exhibit “We were killed because we are Ukrainians” at the Henry Madden Library, California State University, Fresno.

Olga Bertelsen, visiting research scholar from the Robert Schuman Center for Advanced Studies at the European University Institute in Florence, Italy, presented her findings on the least investigated phenomenon of survivor cannibalism at sites of the 1932-1933 genocide in Soviet Ukraine. Dr. Bertelsen used studies from the fields of anthropology, psychology, biology and medicine to analyze women’s behavior at the peak of the Famine as an initial step in writing the social history of the Holodomor. She demonstrated that the collective experience of starvation not only destroyed the women’s support networks prominent in traditional village society, but also inhibited their abilities to advance themselves physically, morally and intellectually, forcing many of them into isolation and delusion.

Daria Mattingly, a Ph.D. candidate in Slavonic studies at the University of Cambridge, U.K., spoke via Skype. Ms. Mattingly illuminated various roles that women played as perpetrators of the Famine on district and village levels. Hers is one of the first comprehensive studies of female perpetrators of the Holodomor, their characteristics and institutional affiliations. The Ukrainian version of her study was published in July in Ukraine. The English version will be published in the “Proceedings of the Second Symposium on the Holodomor” around the time that Ms. Mattingly will be defending her doctoral dissertation.

Jars Balan, director of the Canadian Institute of Ukrainian Studies at the University of Alberta, who is currently writing a biography of Rhea Clyman, raised issues of professional ethics and gender bias against a woman journalist who told truth to power. To counter popular perceptions that the facts about the Famine in Soviet Ukraine were not known to the Western world, Mr. Balan cited evidence from a large number of publications penned by Ms. Clyman.

She was one of the first journalists to venture into the heart of the “workers’ paradise” to find its true nature: the use of political prisoners as slave labor. Clyman was abruptly arrested in 1932 by the Soviet secret police and given 24 hours to leave the country for allegedly spreading “false news” about the Soviet Union. Clyman’s expulsion on the order of the Politburo, the first by Soviet authorities of a Western journalist in 11 years, was reported in scores of newspapers across North America, Europe and around the world, including the Fresno Bee.

Clyman was the first female journalist who could speak the language well enough to go to the villages in eastern Ukraine and speak to people. Her vivid reports ring true today and corroborate the facts recorded in archival documents and eyewitness accounts. Unlike Walter Duranty, under whom she apprenticed in Moscow before her epic road trip through the famine lands in Ukraine, she won no prize for her honest reporting. Sadly, she had been forgotten until scholars brought to light her insightful reporting, which confirmed other findings about the true nature of the tragedy in Soviet Ukraine in the 1930s.

Historian and academician Volodymyr Serhiychuk from Taras Shevchenko National University in Kyiv presented his newly published English-language edition and signed copies of his book, “Genocide-Holodomor of Ukrainians, 1932-1933.” In his lecture with the evocative title “To Honor All Innocent Victims of the Holodomor,” Dr. Serhiychuk emphasized the necessity to continue archival research to reconstruct the full picture of the catastrophic population losses. His analysis of documents from regional archives revealed gaps in recording and reporting deaths from starvation.

When the village authorities ran out of certificates of deaths, they used certificates of births and weddings to continue their gruesome job. To conceal the enormity of the tragedy, they lumped death records from 1933 and placed them under the 1934 records. On 1,677 occasions in one region in one year alone, village councils missed sending reports all together. Dr. Serhiychuk also brought to the attention of the audience statistical data from village schools that have been overlooked by leading Ukrainian demographers. This vast trove of evidence demands careful consideration, he said. Extrapolating the percentage of deaths among schoolchildren during 1932-1933 can provide scholars an indirect clue as to the total losses of the population in Soviet Ukraine.

The cultural program of the symposium included epic dumy sung by Ola Herasymenko-Oliynyk, Merited Artist of Ukraine. The emotional high point was a one-act play, “Buried Truth,” written and premiered by George Wyhinny, at the Fresno Art Museum’s Bonner Auditorium. Told from the point of view of two journalists, one who lied and the other who tried to expose him and Stalin for their lies, it exposed how millions of Ukrainians were slaughtered and how the Kremlin hid these atrocities from the Western world. Using primary source documents, first-hand accounts and witness testimonies, this piece memorialized the victims and celebrated Ukraine’s heroes.

Mr. Wyhinny intertwined the story of a Ukrainian family with excerpts from the diaries of the Welsh journalist Gareth Jones and The New York Times reporter Duranty and interspersed the plot with powerful recitations from the “Requiem for Those Who Died of Hunger in 1921-1922, 1932-1933, 1946-1947” by Dmytro Pavlychko in Ukrainian with English translation. He was helped in the staging of the play by Greg Hallick-Holutiak, music director and performer of the role of the village priest. The plot was developed with the assistance of Cheryl Madden, historian and dramaturg. Dan Aldape, assistant stage manager, made visual and sound effects integral to the play. Graphic designer Denise Pearcy used an authentic archival photograph taken by M. Bokan for the program cover. The father, who witnessed his son dying of hunger, paid with his life for taking the photo and exposing the truth about the famine.

The Organizing Committee members, Dr. Malko, Mr. Kotcherha, Dr. Jowa, Ms. Tscherepenko and Ms. Wussek, and the Steel Film LLC team of Ira and Andrew Korotun all donated their time and effort to make the symposium a success.

Have the organizers achieved their goals? First, the symposium brought together scholars from around the world to discuss promising new directions for writing the social history of the Holodomor. Second, the symposium allowed scholars from the area of the Holodomor Studies to engage in a constructive dialog to clarify legal definitions and moral aspects of the actions of “victims” and “perpetrators” in light of research on other cases from the area of the Genocide Studies. Third, the symposium confirmed further need to conduct archival research to illuminate the roles various social groups and institutions played in the unraveling of the genocidal Famine in the 1930s. Finally, the symposium helped school teachers and college faculty refine curricula for teaching the subject.

The symposium was one in a series of commemorative events this fall. It was preceded by a premiere performance of Kyrylo Stetsenko’s “Panakhyda” by Coro Stetsenko, an ensemble of the Fresno Community Chorus Master Chorale, under the baton of Anna Hamre on Sunday, August 26, in the Chapel of the Holy Innocents at St. James Episcopal Cathedral.

The last in the series of events is a groundbreaking film, “Hunger for Truth: The Rhea Clyman Story,” to be premiered at the University Business Center Alice Peters Auditorium at California State University, Fresno on November 9. The feature-length documentary was an official selection at the 2018 USA Film Festival in Dallas, where it won honorable mention in the short film category, nonfiction.