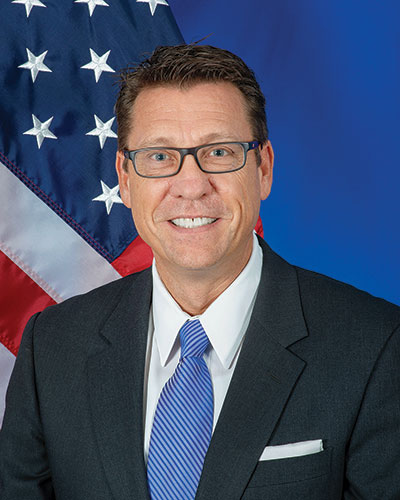 WASHINGTON – Yaro T. Kulchyckyj of the U.S. Department of State was among the 18 U.S. civil servants selected for the White House Leadership Development Program (WHLDP) for 2018-2019.

The WHLD Program helps build the next generation of leaders in the executive branch. Its aim is to strengthen enterprise leadership across the government by providing senior level federal employees with expanded perspective and skillsets to address challenges facing the country. It is sponsored by the Executive Office of the President (EOP), the President’s Manage­ment Council (PMC), and supported by the Performance Improvement Council (PIC).

Mr. Kulchyckyj has 25 years of experience focusing on diplomacy, development and defense. He has 15 years of service with the Department of State in Washington, supporting the U.S. national security strategy, coordinating and executing U.S. foreign policy, drafting agency and inter-agency strategic and management plans, and preparing and reporting agency financial and performance reports to the U.S. citizenry.

Before joining the Department of State, Mr. Kulchyckyj worked for nearly 10 years in Ukraine, implementing U.S. foreign policy towards Ukraine, Moldova and Belarus as a USAID Democracy Officer, and supporting and managing development assistance for non-governmental organizations in the region.

Outside of government, Mr. Kulchyckyj is a senior fellow with the Partnership for Public Service and the recipient of the 2015 Leadership in Action Award for impact and service across the whole-of-government.

In 2018, Mr. Kulchyckyj completed the National Security Executive Leadership Seminar at the Foreign Service Institute, where he has also lectured for nearly 10 years as an adjunct on the State Department’s strategic and resource planning process. Mr. Kulchyckyj has attended training at the National Defense University and served as an election observer for the Organization for Security and Cooperation in Europe in Ukraine.

In his role as a White House Leadership Development Fellow, he supported the President’s Management Agenda and concentrated on reducing the burden of unnecessary reporting requirements and assisted in coordinating the Robotics Process Automation (RPA) initiative across the whole-of-government.

Mr. Kulchyckyj is married with four children, lives in Arnold, Md., and is presently pursuing a doctorate in international affairs at Johns Hopkins SAIS.