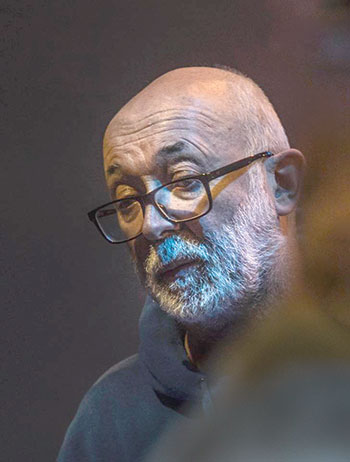 The Lviv-born director promoted Ukrainian theater abroad, modernized the perception of Taras Shevchenko and directed epoch-making festivals at the dawn of Ukraine’s Independence.

Yevhen Nyshchuk, a former minister of culture in Ukraine, announced Mr. Proskurnya’s death in a Facebook post. The cause of death is not yet known.

“He was not just a director, he was a prominent cultural figure, a philosopher. I called him our Playwright,” Mr. Nyshchuk wrote on February 2. “Great loss for me, for all of us. I write about you in the past, and I do not believe it. My heart breaks with pain,” the former minister of culture said.

Mr. Proskurnya was born in Lviv in 1957, and later the family moved to Cherkasy. At first, he connected his life with music and even graduated from music school.

“We became friends when we were still students,” the renown poet Ivan Malkovych wrote on Facebook. “We were very close because we both graduated from music schools – Serhiy as a violist and I as a violinist.”

Mr. Malkovych recalled his longtime friend as a man who had a passion for music and cared deeply about art. “[Mr.] Proskurnya was an extremely delicate connoisseur of music. It was interesting to accompany him to concerts, performances, art events and share meticulous impressions during the break. He was able to notice the finest details because he was a master of details in everything – in life and art,” Mr. Malkovych said.
Mr. Proskurnya was actively interested in theatrical life and even applied to Moscow’s acting school. He was rejected and then worked as a teacher and served in the army. Only after he worked as a teacher and served in the army did Mr. Proskurnya finally begin his arts education. He enrolled in and studied acting and directing at the Ivan Karpenko-Kary Kyiv State Institute of Theater Arts. In 1983 Mr. Proskurnya was invited to direct the Ivan Franko Academic Drama Theater in Kyiv. In 1987, he created the play Seagull, together with actress Ada Rogovtseva. Ostap Stupka made his debut in the play.
Tributes to Mr. Proskurnya were posted on Facebook and came from all corners of Ukrainian society.

“Serhiy, thank you for your commitment, vitality and creativity, for the sparks in the eyes,” Borys Gudziak, archbishop of Philadelphia and metropolitan for the Ukrainian Catholic Church in the U.S.A., wrote on Facebook.

In 1988-1989 Mr. Proskurnya helped develop the All-Ukrainian Festival of Popular Song and Contemporary Music “Chervona Ruta,” was a co-author of the script and chief director of the first festival in Chernivtsi. The festival became a huge phenomenon, showcasing vibrant modern Ukrainian culture when the country was still under Soviet rule.

Svyatoslav Vakarchuk, the lead singer of the Ukrainian band Okean Elzy, noted in his Facebook post that Mr. Proskurnya was a person who “created an authentic and at the same time modern Ukraine.”

In 1990 Mr. Proskurnya took an active part in the student movement that came to be known as the Revolution on Granite (a reference to the paving stones on the square in Kyiv where the students’ camp stood) and was an ardent supporter of Ukraine’s independence.

“He was an adventurous person in a good sense. We did festivals, various projects together,” said Yaroslav Rushchyshyn, a participant of the Granite Revolution, one of the people who founded the Dzyga Art Association in Lviv, and a member of Parliament in Ukraine.

“I was in charge of finances for the Student Brotherhood, and Serhiy always overused the budget because he created all the time. He always wanted more. Because of Mr. Proskurnya and Mr. [Markian] Ivaschyshyn [co-creator of Dzyga and a leader during the Granite Revolution], the world started talking about contemporary Ukrainian art,” Mr. Rushchyshyn said.

In 1990 he visited New York for the first time and began cooperating with Yara Arts Group and the group’s founding director Virlana Tkacz. Yara Arts Group is also a resident company at La MaMa Experimental Theater in New York.

With the collapse of the Soviet Union, Mr. Proskurnya started promoting independent Ukrainian culture abroad with doubled enthusiasm, having cooperated with theatrical groups worldwide and vice versa – he brought numerous theatrical projects to Ukraine, giving the young nation a chance to become a part of the global theatrical discourse.
Since 2008 Mr. Proskurnya has organized five state parades and concerts for Independence Day in Ukraine. He made the innovative decision to include symphonic music in those programs.

Mr. Proskurnya directed the oratorio “God is with us,” a work dedicated to the Heroes of the Heavenly Hundred and the soldiers fighting in eastern Ukraine. The work was performed on Sofia Square on the 23rd anniversary of Ukrainian Independence.
Stephan Bandera, a Canadian Ukrainian journalist and a friend who worked with Mr. Proskurnya on numerous projects, said that Mr. Proskurnya was more than a theater director. He said his field of interest went beyond the stage.

“He was always looking at the social health of the entire society and was concerned about it,” Mr. Bandera told The Ukrainian Weekly in a phone interview.

“He dragged me to a meeting in 2007 when [Viktor] Yushchenko was president. It was on the Auschwitz section of the museum to the ‘great patriotic war,’ which was very one-sided in its interpretation of historical events. So, Serhiy took me to a few meetings to provide another voice – it was a Soviet-era museum. Still, the people at the meeting heard about Ukrainians who were at Auschwitz; even [Mr.] Yushchenko’s father was a prisoner there at some point. Serhiy asked me to help and tell the whole story, not just the Soviet side of it [Mr. Bandera’s grandfather was also held in a Nazi concentration camp] – and under his guidance, he wanted to have Ukrainians included,” Mr. Bandera said.

In 2007 Mr. Proskurnya was a director of Mr. Bandera’s centennial celebrations.
“He expanded horizons to the national and international level and went beyond provincialism,” Mr. Bandera said. “Yet he never had provincial hang-ups. He exuded confidence and professionalism. It felt like he could’ve been Canadian or American or from anywhere else. It felt like you were with a fully developed person with a clear vision of knowing what he wants. It’s a great loss, and Ukraine is going to miss him.”

In 2013-2014 Mr. Proskurnya created a large-scale film project called “Our Shevchenko.” Portions of that project were filmed on Euromaidan. On March 9, 2014, on the 200th anniversary of the birth of famed Ukrainian poet Taras Shevchenko, Mr. Proskurnya’s film “Taras Shevchenko – Identification” was released.

“One of the most important in [Mr.] Proskurnya’s works was the project ‘Our Shevchenko,’ with which he was almost the only one in the then Yanukovych state to honor the 200th anniversary of Shevchen­ko. Serhiy was the one who saw and filmed on the tablet that video with Serhiy Nigoyan [one of the first of the protesters who died during the 2014 Revolution of Dignity], who recites Shevchenko, recognizing in him the hero,” Mr. Malkovych, the poet, wrote on Facebook.

“Shevchenko is not a fetish and not a dressing gown,” Mr. Proskurnya said during an interview with Radio Svoboda in March 2016. “This is not a tool for ideological battles. He positioned himself as an artist, as a man of broad views, a fantastic connoisseur of history, an encyclopedist.”