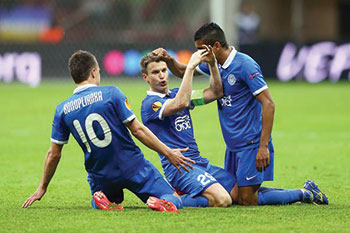 Nikola Kalinic (center) celebrates with teammates after Dnipro scored the opening goal of the Europa League final in Warsaw.

PARSIPPANY, N.J. – Ukraine’s Dnipro Dnipropetrovsk lost 3-2 against Spain’s Seville on May 26 in Warsaw in an action-packed final championship match of the UEFA Europa League. This was Dnipro’s first appearance at a major European soccer final and showed that Ukraine’s third-largest club could compete with the best of the Europa League. This was Seville’s record-setting fourth championship win, formerly known as the UEFA Cup; Seville won the championship the previous year.

Dnipro’s Ruslan Rotan answered in the 44th minute with a 25-meter free kick following a penalty by Timothee Kolodziejczak of Seville against Matheus.

With the match tied at 2-2 at the half, hope was rekindled for Dnipro. The second half saw many scoring opportunities for both sides, with many corner kicks and free kicks that were mostly on target. Bacca scored again for Seville in the 73rd minute off a free kick, with an assist from Vitolo.

Dnipro kept the pressure on until the end, with a few close calls but suffered difficulty clearing the ball from its own danger zone. Dnipro was handed five yellow cards and Seville received three from English referee Martin Atkinson.

Statistically, Seville led on possession 58-42 percent, and on attempts 18-12, but Dnipro was more accurate on goal, with five shots on target, four off target and three blocked shots to Seville’s five on target, nine off target and four blocked shots. Seville was awarded 11 corner kicks to Dnipro’s five. Seville dominated in passing, with 85 percent completed out of 444 passes, to Dnipro’s 73 percent completed out of 256 passes.

“Our opponents were more experienced but we still tried to play the way we wanted to. However, although we worked really hard to prevent them – we knew Carlos Bacca would be a very dangerous striker – we still could not stop the second and third goals. We gave away the third ourselves, we should have just cleared the ball, but this sort of thing comes with experience.

“We scored twice today, but in previous games we wouldn’t have lost a match like this even if we’d only scored once.”

“…To fight for the championship and to compete at this level in Europe, of course we need a few more good players.”

In Dnipropetrovsk, the city’s major square was filled with soccer fans who viewed the match on a large projection screen. Dnipro may have lost the match, but according to the posts on the team’s Facebook page, Dnipro has won the hearts of Europe. The Football Federation of Ukraine wrote on its Facebook page: “They are our heroes! Thank you for the game!”