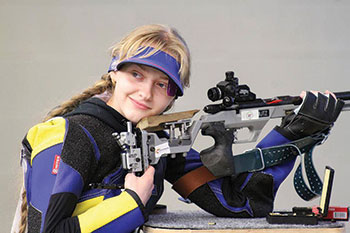 She will be competing at her first Paralympic Games, and this young World and European champion hopes to record personal bests in Tokyo. Since there are few athletes in the world better with a rifle in their hands than Ukraine’s Iryna Shchetnik, the odds are she will reach new personal heights on the world’s ultimate competitive sports stage.

Shchetnik burst onto the scene in 2018, picking up her first European title in the R2 (women’s 10-meter air rifle standing SH1) in a most stunning manner, setting a world record while beating Slovakian legend Veronika Vadovicova. Her reaction to her remarkable success stressed the achievement over the competition.

“It’s not about who you beat personally,” Shchetnik said in an interview with World Shooting Para Sport. “It’s not about the person, but the result. We don’t struggle between athletes – we struggle for our own results!”

It follows that she has set a high bar for herself at her first Paralympics. Her goal is simple: set personal records in Tokyo.

“Shooting stands out among other sports in that the struggle is within the athlete, first of all, and then within external factors. Any improvement of my results is the feeling of victory.”

When one is already the World record holder, personal bests translate into Paralympic records and the gold medals that follow. Shchetnik has made herself a clear favorite for several medals in Tokyo by capturing a full collection of medals at the World Cup event in Novi Sad, Serbia, in early August this year. She won gold in the R2 10-meter standing SH1, silver in the R8 50-meter three positions SH1, and bronze in the R3 10-meter prone SH1, barely missing out on another medal when she finished fourth in the R6 50-meter prone SH1 event.

“Shooting has become a real teacher for me! It teaches concentration and endurance, which helps to build character. There is constant self-improvement.”

Family breeds character
Only 21-years-old, her approach has already allowed her to achieve phenomenal results.

Shchetnik has won over 50 medals, including two golds at the World Shooting Championships, and she has set a few world records. She gives much credit for her success to the support she receives from her family, who she speaks with prior to each competition. She has a uniquely special connection with her father, going back to her childhood. Growing up she was attracted to small arms, and when her father found out about a nearby shooting complex, he started taking his daughter there for lessons and practice. Aside from moral support, her father designs and builds Shchetnik’s equipment adaptations, including her shooting table and the chair she uses in competitions. Her father’s designs have been utilized by athletes and coaches in Japan, Germany and China.

She credits her father’s support as a major factor in her personal results.

Perfection a product of training
Raw talent and family support are generally not enough for a special athlete to rise to World Champion status. Training is doubtless the key ingredient to achieve the ultimate reward in sports competition and be consistently the best performer. Shchetnik trains with one of the world’s most successful Paralympic development organizations, the National Team of Ukraine, at a sports complex in the Ukrainian resort city of Odesa.

These training camps are known for bringing together athletes from all over Ukraine. The competitors train daily for four to eight hours, six days per week, with most camps lasting up to three weeks.

The Ukrainian Shooting Para Sport team topped all nations at the last World Championships in 2019. Their success has resulted in greater government support, specifically through the Sports Committee of Ukraine, allowing the team to train very extensively, even outside Ukraine.

She is in the process of finishing her bachelor’s degree in languages and hopes to someday work as an interpreter, which would be a personal benefit while traveling abroad for competitions or training camps. She is fluent in six languages: Ukrainian, English, French, German, Latin and Russian.

Her underlying message heading into the 2020 Paralympic Games in Tokyo: Every athlete dreams of improving their personal results, dreams of setting their own personal record.

When asked what she would say to her friend and rival Vadivacova if Shchetnik were to set her own personal record and win gold in Tokyo, she smiled and replied: “We have a very friendly relationship. We correspond, chat and congratulate each other on holidays. The main thing I want to emphasize is that I feel proud to be part of one of the strongest shooting teams in the world!”