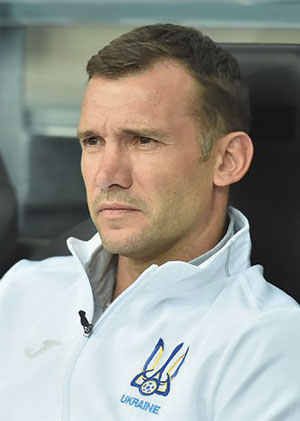 Andriy Shevchenko, head coach of the Ukrainian national team, during a match against Malta in 2017.

One of the best places for a soccer fan to learn about who’s who in his sport is the city’s tourist shops, stocked with local favorites and the true stars of the game. A visit to Italy in the early Noughties (2000-2009) would have had jerseys for Fiorentina’s Gabriel Batistuta or Rui Costa in Florence, Francesco Totti or Hernan Crespo in Rome, depending on club loyalties. Sometimes a visitor might find souvenir apparel from a rival city’s club, almost always with the name on the back of an Italian player like Alessandro Del Piero or Christian Vieri.

A non-Italian whose jersey was readily available in cities like Florence and Rome was Andriy Shevchenko. This Ukrainian’s skills on the pitch and influence on the sport were a result of his success as a footballer in Milan.

These days, top talents from lesser leagues move to bigger leagues at earlier ages, grabbing for big bucks and glory. Some 20 years ago it was common practice for teams from afar to retain their top players for longer tenures.

If a player of Andriy Shevchenko’s abilities were to have emerged in 2018, he probably would have made his move to Serie A (top Italian league) a year later, based on his 19-goal rookie season with Dynamo Kyiv. Today’s social media would have boasted Instagram clips of his fantastic finishes and “Welcome to AC Milan” YouTube videos, generating enough hype to procure “Sheva” a huge transfer from Ukraine to England’s Premier League, Italy’s Serie A or Spain’s La Liga.

Of course, Ukrainian football would have missed out on his back-to-back 30-goal seasons between 1997 and 1999.

Highlights of the above first season included a first-half hat-trick at FC Barcelona when Dynamo defeated the home club 4-0 in the UEFA Champions League. The second season witnessed Dynamo eliminating defending champion Real Madrid in the quarter-finals of Europe’s top competition. Shevchenko tallied all of Kyiv’s goals in that 3-1 aggregate victory, demonstrating a reason and single-mindedness to showcase him as a player who grasped the moment as his audition for the big leagues.

Some have offered that Shevchenko treated the 1998-1999 Champions League as his own private talent show – the handsome young striker, eagerly playing up to the cameras, knew how important it was to perform perfectly against Europe’s grandest club, Real Madrid.

The 1-1 draw on Real’s home turf in the first leg had opened the door for him and he was well on his way. The night of the second leg saw the Ukrainian forward treating Los Blancos like unwanted visitors on his pitch, despite their lofty profile from past proficiencies. The 23-year-old tore past Real goalkeeper Bodo Illgner to win a penalty and converted the rebound after the German saved the initial shot. He proceeded to score the match winner on a perfect pass from Sergei Rebrov. 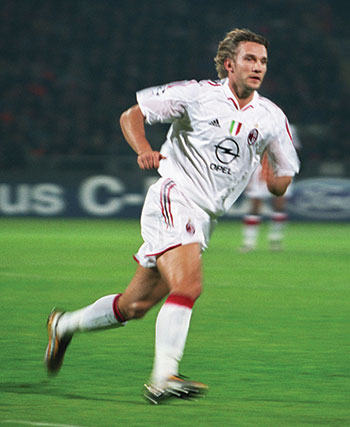 Andriy Shevchenko runs down the pitch during his time with AC Milan in 2004.

In his first year with AC Milan (1999), Shevchenko was the top goal scorer in Serie A, winning Italy’s golden boot, the capocannoniere. Italian soccer has historically always balanced homegrown talent with foreign players. It is noteworthy to appreciate Shevchenko’s amazing arrival came when Italy’s national team was peaking. Youngster Francesco Totti had led the Azzurri to within seconds of winning Euro 2000 shortly after Sheva’s 1999-2000 campaign concluded. His breathtaking first season in Milan had trumped the success of Italy’s own up-and-comers. It was still another example of Shevchenko demonstrating he knew how to grasp the moment. The talented young man with the big contract was making a name for himself in northern Italy.

Clutch. It mattered not that he had scored in only five league matches and a mere four in Europe. A healthy Shevchenko was tabbed to play all 120 minutes of the final because he had earned it based on his prior three seasons. Sheva’s worst goal-scoring campaign while wearing red and black saw him score the winning penalty shot in the 2002-2003 Champions League final versus Juventus.

Now one of his four Champions League goals that season happened to be a group-stage winner against Real Madrid. Once again, the reigning champs were not able to stop their Ukrainian nemesis. A defense-splitting assist from Rui Costa was tagged into the net by the man with no fear who knew how to seize the ultimate moment.

Shevchenko went on to repeat as capocannoniere again in 2003-2004, tallying 24 times in 32 Serie A games, leading AC Milan to its first title in five years. He scored in the UEFA Super Cup win over Porto, he scored three goals in his club’s Italian Super Cup victory over Lazio, and he was awarded the 2004 Ballon d’Or, anointed as Europe’s most outstanding player.

Turning point
Once one has achieved the ultimate it is usually difficult to improve on perfection, and the 2004-2005 season proved to be a low point. Whereas AC Milan had a miraculous run to Champions League glory in 2003 (stoppage-time win against Dutch club Ajax, away-goals triumph over Inter Milan, last five matches decided in extra time), their 2005 run saw them gain the final against Liverpool as favorites (Manchester United and Inter were defeated home and away).

Down 3-0, Liverpool stormed back to score three goals in six minutes. This momentum along with a miraculous save on a Shevchenko strike by goalkeeper Jerzy Dudek set the stage for another one of those ultra-special moments. The man who some believed could not fail in this competition, could not best Dudek with the final penalty shot of the shootout. For the first time, on the grandest stage where he had always grabbed the spotlight, his powers did not prevail.

There was one more season with AC Milan, followed by the 30 million-pound move to Chelsea where he underwhelmed on the pitch. Shevchenko did lead his native Ukraine to the 2006 World Cup quarterfinal round and returned to Dynamo Kyiv for three additional years of club football in 2009. He captained Ukraine at Euro 2012, his last games as a player.

He is a respected soccer icon in Ukraine, and for a while was one of Europe’s most feared strikers. A professional athlete’s time at the top is limited, which means one must capitalize on one’s opportunities. Reflecting back on Shevchenko’s career, it is quite safe to say he achieved everything he could. One might even say he overachieved.