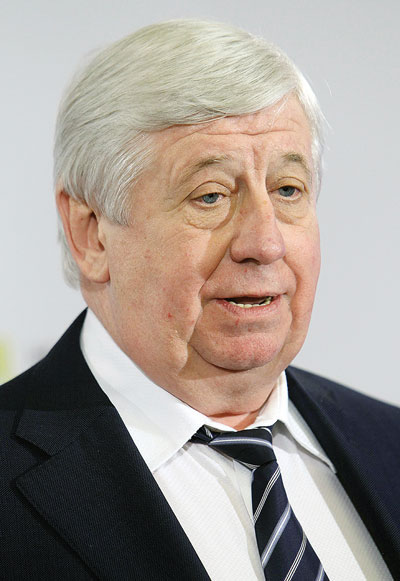 Viktor Shokin was approved by Parliament as the new procurator general on February 10, replacing the highly criticized Vitaliy Yarema.

KYIV – Ukraine’s top law enforcement officer, Procurator General Vitaliy Yarema, submitted his resignation on February 9 amid mounting criticism of his failure to prosecute any officials in the administration of President Viktor Yanukovych for alleged economic crimes, violence against the historic Euro-Maidan protest and separatism in the Donbas region.

“It’s very good that we achieved the resignation of the procurator general, who showed no results,” Self-Reliance National Deputy Yegor Sobolev told the February 10 parliamentary session during which Mr. Yarema’s resignation was approved. “That’s the first time in Ukrainian history that a procurator general left who suited the president, suited the majority of political forces but didn’t suit society.”

Mr. Yarema resigned ahead of a February 17 report in the Wall Street Journal that stated the European Union will soon begin to drop sanctions against members of Mr. Yanukovych’s entourage – starting with four out of 22 targeted – for lack of evidence provided by the Ukrainian government to back up corruption allegations.

“I stated several months ago that, in the event that EU sanctions are removed from the Yanukovych entourage through the fault of the procurator general, Vitaliy Yarema should be held politically responsible and resign,” wrote National Deputy Serhiy Leshchenko on his Facebook page the same day as the resignation. “It’s almost certain that sanctions will be removed from some of them in early March, a year after they were imposed. Yarema decided not to wait for the storming of the Procurator General’s Office and leave of his own free will. It’s the correct decision.”

To replace Mr. Yarema, the Verkhovna Rada on February 10 approved the president’s nomination of Viktor Shokin, who was appointed deputy procurator general in December 2004 and has served in that position ever since.

Fiery debate preceded the vote in which critics warned he’d perform just as badly as Mr. Yarema, having served at the heart of Ukraine’s corrupt law enforcement system for more than a decade, including under the Yanukovych administration. Mr. Shokin spent most of his career as a prosecutor, starting in 1980.

“Let’s not sin against our souls and appoint yet another ineffective person,” Mr. Sobolev, who heads the Parliament’s Anti-Corruption Committee, said in his address to the Rada. “Two procurator generals have come after the Euro-Maidan and the result is nil. A person from the system can’t break the system. A person who ‘grew up’ in the Procurator General’s Office can’t create a new procurator general.”

As evidence of Mr. Shokin’s loyalty to Ukraine’s corrupt oligarchy, critics pointed out that his nomination was supported not only by the pro-Western Petro Poroshenko Bloc, the People’s Front led by Prime Minister Arseniy Yatsenyuk and the Batkivshchyna party led by former Prime Minister Yulia Tymoshenko, but also by the Putin-aligned Opposition Bloc led by oligarch Yurii Boiko.

In all, his candidacy gained 318 votes, far more than the 226-vote majority needed.

“The Poroshenko Bloc, the People’s Front and Batkivshchyna need to determine with whom they have formed a coalition – with the people who united to implement the ideas of the Maidan, or the Opposition Bloc and splinters of the Party of Regions,” Mr. Sobolev said after the vote. “The vote was a shame and a big mistake. That the Opposition Bloc unanimously supported Shokin’s candidacy demonstrates an absence of his intentions to fight against corruption and the old system.”

On the evening of the vote, the Ukrayinska Pravda news site revealed Mr. Shokin’s own indulgence in the Ukrainian version of nepotism known as “kumivstvo,” which involves appointing relatives and “kumy” (godparents of children) to influential government posts.

Corruption will only worsen under Mr. Shokin, said National Deputy Serhiy Vlasenko, the lawyer for Ms. Tymoshenko during her imprisonment.

Yet Mr. Shokin also has many defenders, including Mr. Leshchenko, who pointed out that he was responsible for filing the first criminal charges in the murder of journalist Heorhii Gongadze, as well as filing criminal charges in 2005 – after the Orange Revolution – against Donetsk oligarch Borys Kolesnikov, Kharkiv political leader Yevhen Kushnaryov and Dnipropetrovsk oligarch Igor Kolomoisky.

“The first two were held on bail and the third fled to Switzerland to hide from his allergy to ambrosia,” Mr. Leshchenko said. “It’s not Shokin’s fault that [former President Viktor] Yushchenko dissolved these cases in a pact with the Party of Regions.”

That the Opposition Bloc unanimously voted for Mr. Shokin is positive because it demonstrates that its members suspected of corruption – including the faction head, Mr. Boiko himself – fear him and wish to gain his favor, said Volodymyr Fesenko, the head of the Penta Center for Applied Political Research.

In addition, unlike Mr. Yarema, who spent his career climbing the ranks of Ukraine’s police force and had no experience as a prosecutor, Mr. Shokin is a career prosecutor and knows the nuances of compiling evidence and filing a criminal case, said Taras Chornovil, a former Party of Regions insider and political expert.

“Yarema was too weak a figure to change anything in the procurator general. Moreover, he didn’t want to get involved in conflicts and look for enemies,” Mr. Chornovil said. On the other hand, “Shokin understands very well whose fingers need to be placed in the door for everything to work. He’ll break the resistance and has already begun to do so. We see this already.”

Indeed Mr. Shokin offered some glimmers of hope. The day after his appointment, he signed an order restructuring the Procurator General’s Office, changes that he said “should maximally raise the effectiveness of the process of investigating crimes committed during the Revolution of Dignity and bring to a final result criminal cases regarding former high-ranking officials and employees of law enforcement bodies.”

On February 12, he submitted a request to the Verkhovna Rada to arrest and hold on bail three judges of the Pechersk District Court – Oksana Tsarevych, Viktor Kytsiuk and Serhii Vovk – who were responsible for illigally imprisoning former Internal Affairs Minister Yurii Lutsenko and former Prime Minister Tymoshenko. He also asked the Higher Qualifications Commission of the Judges of Ukraine to place them on leave.

On February 14, he dismissed the head procurator of the Donetsk Oblast and the head of the investigative administration of the Procurator General’s Office, Sviatoslav Lahaniaka, who was responsible for investigating crimes committed against Euro-Maidan protesters and the crimes of top Yanukovych administration officials.

The same day, Luhansk oligarch Oleksandr Yefremov was arrested and charged with “abuse of power under severe conditions” and “falsification of authority.”

The arrest came nearly a month after a request submitted by Iryna Herashchenko, the president’s ombudsman for peacefully resolving the Donbas conflict, to the Procurator General’s Office to personally review evidence on whether Mr. Yefremov and Natalia Korolevska financed the separatist fighters of the so-called Luhansk People’s Republic. Mr. Yefremov and Ms. Korolevska are among the oblast’s wealthiest political players and widely reported by Ukrainian media to have played a critical role.

Having succeeded in undermining corrupt schemes in Georgia, Mr. Sakvarelidze vowed sweeping reforms and promised to resign within a year if he doesn’t demonstrate tangible results. “In 2003, 1,850 prosecutors worked in Georgia. By 2012, 350 were left. You can draw the parallels yourselves,” he told a February 18 press conference.

Mr. Yarema was dismissed by Parliament on February 10 with 291 votes. The president’s critics argue that his convenient exit from the political stage, without having to be responsible for his failures, is evidence that Mr. Poroshenko had a deal with Mr. Yanukovych to ensure that criminal charges wouldn’t be filed.

“We don’t know everything about the agreements between the current government, particularly from the president’s end, and the representatives of the Yanukovych clan,” Serhiy Ivanov, a former Luhansk prosecutor-turned-civic activist, told the gazeta.ua news site in early January. “That’s the source of the sabotage and the intentional postponing of criminal cases involving them. The European Union found a reason to arrest the property of [former Prime Minister Mykola] Azarov and his son. Our prosecutors didn’t. Therefore, they either received bribes or they’re mentally ill.”

Others argued that Mr. Yarema had inherited a Procurator General’s Office that was filled with corrupt officials, many with ties to the Yanukovych entourage, who did little to assist investigations in high-profile crimes.

“He didn’t understand how decisions are reached, and he couldn’t understand what strings to pull for mechanisms to begin working in the Procurator General’s Office because there’s fierce resistance there,” Mr. Chornovil said. “It’s a structure that was totally cleaned out by Yanukovych.”