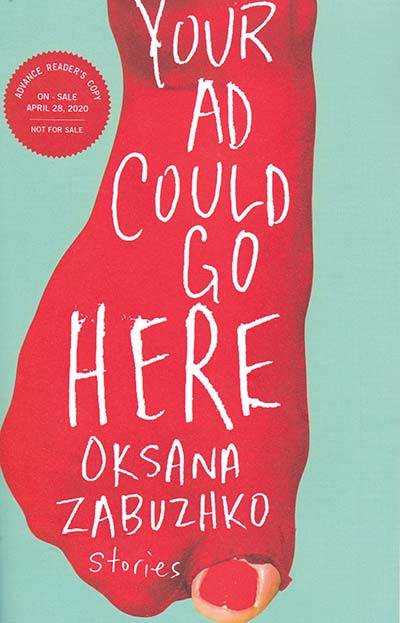 Oksana Zabuzhko, author of “Fieldwork in Ukrainian Sex,” has published a new short story collection. In “Your Ad Could Go Here,” Ms. Zabuzhko explores the ties that bind sisters, parents and children, friends and lovers, husbands and wives. Her vulnerable, wise and cruel characters challenge the concept of truth and capture the strangeness of being human.

From the triumph of the Orange Revolution, to domestic victories in matchmaking, sibling rivalry and even tennis, Ms. Zabuzhko juxtaposes things as they are with how they could be. The stories resonate with her irreverent and prescient voice, which echoes long after reading.

Reviewing the book, PEN America wrote “Objective truth and personal mythologies collide in Zabuzhko’s short story collection, which centers on the question of just what truth is in this contemporary moment. She takes readers on a journey…, challenging us to think about how things could be by incorporating elements of myth and fairytale in these breathtaking stories.”

Ms. Zabuzhko made her poetry debut at the age of 12, but because her parents had been blacklisted during the Soviet purges of the 1970s, it was not until the perestroika period that her first book was published. Since then, her 20 books of poetry, fiction and non-fiction have been translated into 15 languages.

Ms. Zabuzhko has received numerous awards, including a MacArthur Grant (2002), the Antonovych International Foundation Prize (2008), the Ukrainian national award the Order of Princess Olha (2009), the ANGELUS Central European Literature Award (2013), and many other national and international awards.

She has spent time in the U.S. lecturing as a Fulbright fellow and a writer-in-residence at Penn State University, Harvard University, and University of Pittsburgh.

“Your Ad Could Go Here” is available from Amazon and Barnes & Noble, and is published in softcover, hardcover, e-book and audio CD versions.