Chornomorska Sitch and the Ukrainian American Youth Association (SUM) teams pose for the group shot at the USCAK Youth Games at the SUM camp in Ellenville, N.Y.

This year marks the 50th anniversary of the founding of the Sitch Sports School, and 30 campers arrived from as far as California to attend.

Coach Andrij Kyzyk led tennis instruction, assisted by Ms. Ziobro and Roman Kornyat. The students focused on a review of basic skills that may have become rusty, including forehand and backhand strokes as well as serving, and putting it all into practice during match play.

On the soccer field, further down the hill below the tennis courts, Mr. Cymbal, with assistants Marissa Farrug and Alexandria Cymbal, worked with the students on their dribbling skills and quickness, while putting those drills to work in scrimmages.

While at times rain threatened the sports schedule, the resilient group adapted to fit in some music and singing with Mr. Cymbal at the gazebo, even on sunny days. As always, the charming sound of music lifted spirits and put smiles on the faces of campers and guests of Soyuzivka alike.

At the conclusion of each day, during the lowering of flags, MVPs were named in each sport.

The first week’s session saw campers learn and develop their skills in their respective selected sports. The week drew to a close with a “vechirka” (dance) on Thursday night with DJ coach Danilo. Mr. Cymbal led the camp in song during the Friday bonfire that featured s’mores, skits and songs sung by the campers. Mr. Kurywczak recounted the ghost tale of the “legend of Fruzia,” complete with howling special effects and a glimpse of an apparition of Fruzia.

During the second week’s session of camp, participants prepared for the annual USCAK (Ukrainian Sports Federation of the U.S.A. and Canada) Youth Games that were hosted on Friday, August 2, by the Ukrainian American Youth Association (known by its translated acronym from Ukrainian as SUM) camp in Ellenville, N.Y. The focus during the week was on committing the campers to self-improvement and teamwork.

To break-up the routine daily schedule during the second week, Mr. Kurywczak announced on Tuesday that an outdoor laser tag game would be played that day instead of regularly scheduled league games. A barbecue was held on the Veselka patio on Wednesday, followed by league games. Prior to the USCAK Youth Games, Mr. Cymbal replayed footage from 2014 when Sitch won gold in soccer, hoping to inspire the players toward victory.

Sitch and SUM showed their united spirit in sport with a commemorative photo of all of the participants of the Youth Games. Sitch won 10 gold medals, nine silver and eight bronze medals to finish in second place overall.

The senior Sitch volleyball team won silver in the final, the junior volleyball team won silver, Sitch’s junior soccer team won bronze and the senior soccer team lost its final match 0-5 against SUM. Although the score certainly did not reflect their training efforts, Chornomorska Sitch remained one solid unit as the team stepped off of the field in reverent and respectful defeat.

For the Sitch Sports School this competition turned the page to a fresh approach to the USCAK Youth Games. Rather than fanning tensions between the two teams, the athletes took on one another as sports opponents – all showing passion, courage and mutual encouragement.

The evening concluded back at Soyuzivka with a closing champion’s bonfire complete with s’mores, songs and memories that will last until next year.

Special thanks were expressed to Soyuzivka’s General Manager Nestor Paslawsky and Assistant Manager Stefko Drabyk for assisting the camp to run smoothly, and Chef Andriy “Snake” Sonevytsky, whose nutritious and delicious meals kept the campers going during their demanding schedules. The Sitch Sports School’s administrator, Yarko Twardowsky, was acknowledged for his assistance with camp registration and other administrative services. 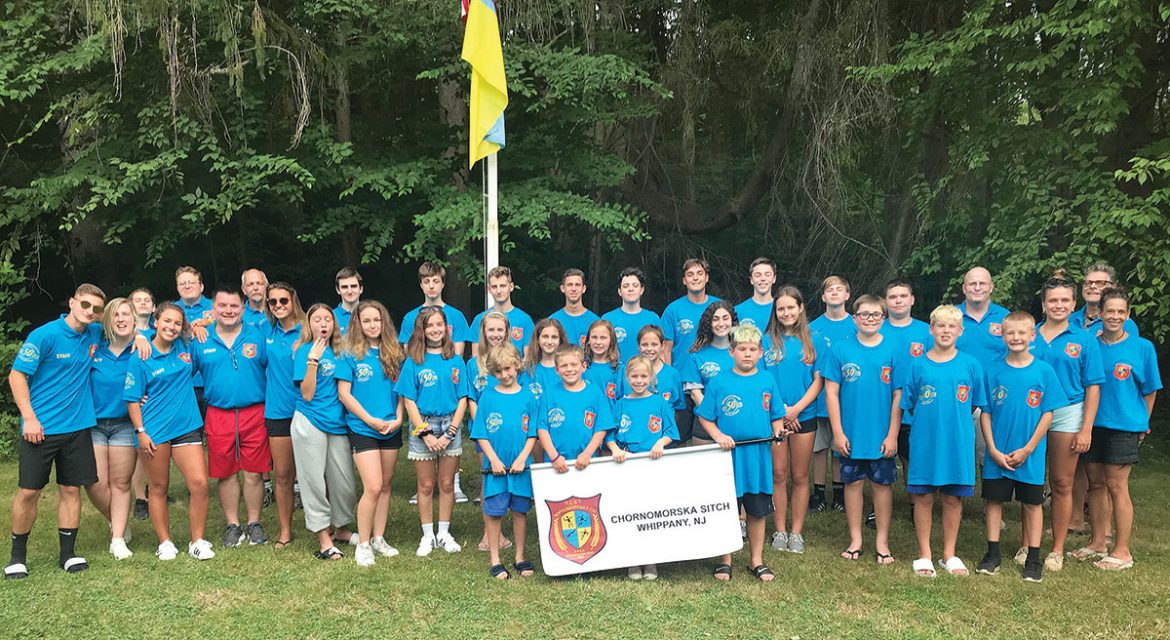 Campers and staff during the first week’s session of the Chornomrska Sitch Sports School at Soyuzivka.