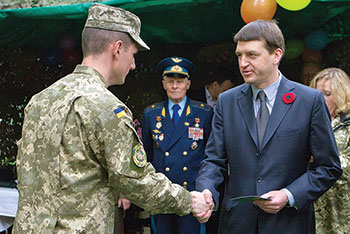 Maksym Shkuro, the head of the Solomianskyi District Administration in Kyiv, awards a veteran of the Anti-Terrorist Operation at a Victory Day celebration on May 7.

KYIV – Ukraine’s growing pains were ever more apparent during the annual May holidays. Parliament approved legislation in early April that was aimed at shifting the emphasis to the newly created Day of Remembrance and Reconciliation on May 8, instead of the traditional Victory Day on May 9.

Yet, even with the national government sending letters to local councils advising them to organize events accordingly, traditional parades and processions were repeated on May 9 in many cities, towns and villages throughout the country.

“One needs to understand the machine that the consciousness of people went through under the Soviet Union. It was always underestimated and continues to be,” said Yevhen Holovakha, the director of the Institute of Sociology at the National Academy of Sciences. “It’s social inertia, and transition mechanisms are necessary. In Hungary for example, when the names of streets were changed, the new signs were placed under the old ones, before they were finally removed.”

Though moderates favored a transition, nationalists criticized President Petro Poroshenko for not leading the transition by deliberately not signing the legislation until after the holidays, on May 15, which they said was meant as a signal to proceed as usual. 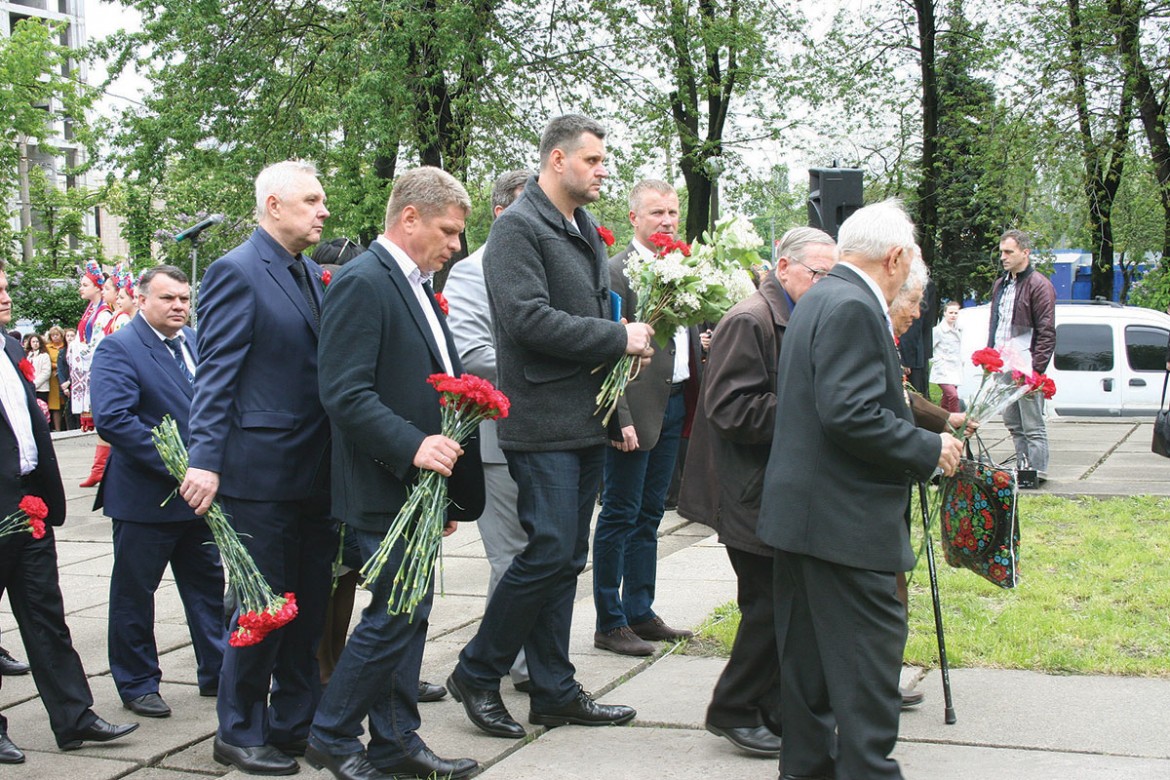 Genadii Sintsov (center), the head of the Darnytsia District Administration in Kyiv, participates in a flower-laying ceremony on May 8, the newly established Day of Remembrance and Reconciliation.

Left to their own devices, it was local politicians themselves who decided how to approach the commemorations. Their decisions were largely driven by how they felt their respective constituencies would respond, particularly with the first local elections in five years scheduled for October.

Those who felt their constituencies wanted change began to shift the emphasis away from May 9. These were mostly in Kyiv, where only 63 percent of residents believe May 9 should be celebrated, and western Ukraine, where 66 percent support it. Nationwide, 78 percent of Ukrainians think Victory Day should be celebrated, according to a poll conducted between March 13 and 20 of 2,800 respondents by the Social Monitoring Center in Kyiv and the Ukrainian Institute of Social Research.

Parades, processions and other militaristic ceremonies were kept in place by those politicians who would gain more popularity by maintaining the status quo. Nowhere was that more apparent than the Solomianskyi district in Kyiv, which is home to the Cherniakhovskyi National Defense University and the National Internal Affairs Academy.

Aiming to score points with this electorate, Maksym Shkuro, the head of the district state administration that serves as the main local governing body, pulled out all the stops to ensure that a classic Soviet-style celebration was going to be held.

“Why are we holding so many events? We are the most militarized district,” he said. “All the military bases, leadership and educational institutions are situated in the Solomianskyi district. That’s why I think we need to maximally emphasize these issues.”

He and his staff arranged three days of ceremonies, rehashing Soviet clichés such as pot-boiled “soldiers’ kasha” served with 100-gram shot glasses of vodka at a picnic on May 7.

Accordionists played Soviet hymns and songs to the delight of the invited elderly, most of whom were clearly too young to have participated in World War II. The youngest anyone who fought in the war could be is 85, which would mean that person was 16 years old in 1945. 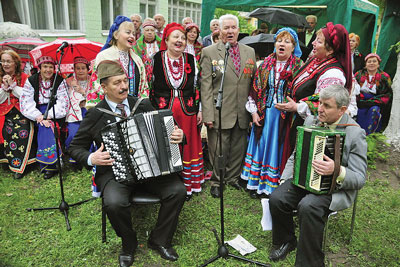 Singers and musicians perform at a Victory Day holiday hosted by the Solomianskyi District Administration in Kyiv on May 7.

With the last of the veterans passing away, Victory Day has had to assume a new meaning in the last decade as a military celebration. That new meaning has been further bolstered by the Anti-Terrorist Operation (ATO) in the Donbas and its veterans were honored guests in virtually all districts.

In meeting with The Weekly, Mr. Shkuro and his staff openly acknowledged that their events extended beyond celebrating the World War II victory.

Rather than seeing the Day of Remembrance and Reconciliation as intended to remove the holiday’s militaristic celebratory tone, Mr. Shkuro interpreted it as an opportunity to honor Ukrainian veterans of both sides of all wars, not just World War II.

“The task is to replace the accent, which we have done by introducing the European tradition of May 8, and the accent is now on honoring everyone,” he said. “We stopped concentrating attention on a single event, which turned into a cult of some kind. But now we are leaving the cult to honor the memory of participants of all wars and reconciling, as opposed to pride in victory.”

But Mr. Shkuro’s episodes of politically correct rhetoric – which sometimes contradicted his own intent to “maximally emphasize” the holiday’s military aspects – wasn’t reflected in his district’s planned schedule.

While military parades and processions were eliminated at the national commemoration, as well as in cities and districts throughout Ukraine, he was still planning a parade on May 8 – the very day that was supposed to be limited to memory and reconciliation.

In speaking with his staff members, it became apparent that Mr. Shkuro was trying to balance appealing to his conservative, military-oriented electorate with the rhetoric of his party, the Ukrainian Democratic Alliance for Reform (UDAR), which has stressed the need to move away from May 9 towards May 8.

“If in previous years, it was a source of pride to see the military and APCs [armored personnel carriers], then this year it’s a mixed accent on honoring memory and reconciliation, with more of an accent on peaceful events,” he said. Yet the May 8 parade involved veterans, military cadets and an orchestra.

In walking the tightrope of his rhetoric, he seemed to not want to go too far towards the reconciliation view. When his deputy, Olena Maksymova, tried to further downplay the scale and military nature of the events, referring to a second parade as a “small procession” of cadets, he became irritated with her excessive efforts. “Wait. Why isn’t it a parade?,” he said. “It’s the same as a mini-parade.”

The political aims of Mr. Shkuro’s plans were also revealed in the distributions of social payments that he had organized for those belonging to various benefits categories that had been created for those who had even a minimal relation to the war. The most common is Children of the War, for which anyone under age 18 as of September 1945 qualifies.

“If the state was stronger and could offer something more than kasha and processions, then there’d be fewer large-scale problems,” Mr. Holovakha said. “But the state is so weak that it can only offer these handouts instead of resolving economic problems.”

For that reason, wealthy countries such as Germany have long ago put World War II behind it, he said. Among the leading European economies, only France has May 8 as a national holiday with a day off from work.

A starkly contrasting approach to the commemorations was taken in the Darnytsia district on Kyiv’s Left Bank, on the other side of the Dnipro River. Darnytsia is considered among the most progressive districts in Ukraine, with a younger-than-average population for the city and a birth rate that exceeds the death rate.

Seventeen Darnytsia residents have perished in the Anti-Terrorist Operation so far, and the district administration, led by Chair Gennadii Sintsov, has organized a coordination center for the district’s nearly 15 volunteer organizations in the war effort.

Mr. Sintsov saw the atmosphere was ripe for being assertive in downsizing the district’s outdated traditions, starting with eliminating the annual May 9 parade and processions.

Instead, three main events were held, consisting of a requiem on May 8 and two concerts on May 9, as well as flower-laying ceremonies at the district’s 11 memorials with the graves of soldiers and victims. The administration adopted the slogan “From the Victory to Victory” to make the commemorations relevant to today’s events.

In speaking to The Weekly, Mr. Sintsov described having undergone an evolution in his personal opinion with regard to the war. He had been taught in his Soviet upbringing to view Marshall Georgy Zhukov as a genius military commander. Yet, upon further research, he discovered that his “genius” was based merely on his willingness to dispose of human lives to accomplish a military goal.

He also saw how the head of a local veterans organization began to refer to World War II of 1939-1945, instead of the Great Patriotic War of 1941-1945, the terms still used by the Russian government.

“The main leitmotif is to show respect for veterans, not offend them, yet at the same time change the vector of this holiday and not celebrate it with St. George ribbons,” Mr. Sintsov said.

“There was a concentration camp in the Darnytsia district where very many people were buried. We can’t not place flowers at that memorial. We have the Darnytsia train station that was bombed and liberated. We can’t not commemorate these places because it’s not merely a tribute to the veterans who served in the Soviet army. We should show young people there was such a war.”

So despite the break with certain clichés, other traditions such as “Lessons of Bravery” in schools were extended, to involve the veterans of other wars, including the ATO. In this sense, Victory Day still retained its militaristic tone.

“A person comes and explains his military experience and patriotism. We invite these people to events because they are respected in society,” said Serhii Adamenko, the district administration’s press secretary.

He avoided the question of whether it was truly a commemoration of the World War II victory, or whether it has morphed into something else. But Mr. Sintsov openly stated that the May 8-9 holiday should also be about patriotism, adding his own spin to a holiday that continues to have different meanings for different people.

“If we talk about World War II and the current war, we should tell children only one thing: it’s bad when children are killed, regardless of whether it was Hitler’s fascism or Putin’s current fascism,” he said, not directly answering the question of why a holiday was needed for that instead of a simple classroom lesson.

“Our country is trying to defend itself yet again. We should talk about patriotism towards our land, not just about fascist tanks having invaded Ukrainian territory,” Mr. Sintsov added.

Mr. Holovakha said he expects the May 8-9 transition to take many years, in one form or another.

“It’ll be a Ukrainian cultural peculiarity for a long time,” he said. “Since it was always the most positive event, it took root in people’s consciousness and in most cases people don’t even think about why they do it.”

The Darnytsia District Administration asked for contributions to its Bezpechna Darnytsia Charity Fund, which, according to Serhii Adamenko, the administration’s press secretary, is for “the volunteers of the Darnytsia district who are helping the ATO fighters.” Donations can be made to Avant Bank, SWIFT code KHRCUAUK, account number UA0938070800000260010100 12250.