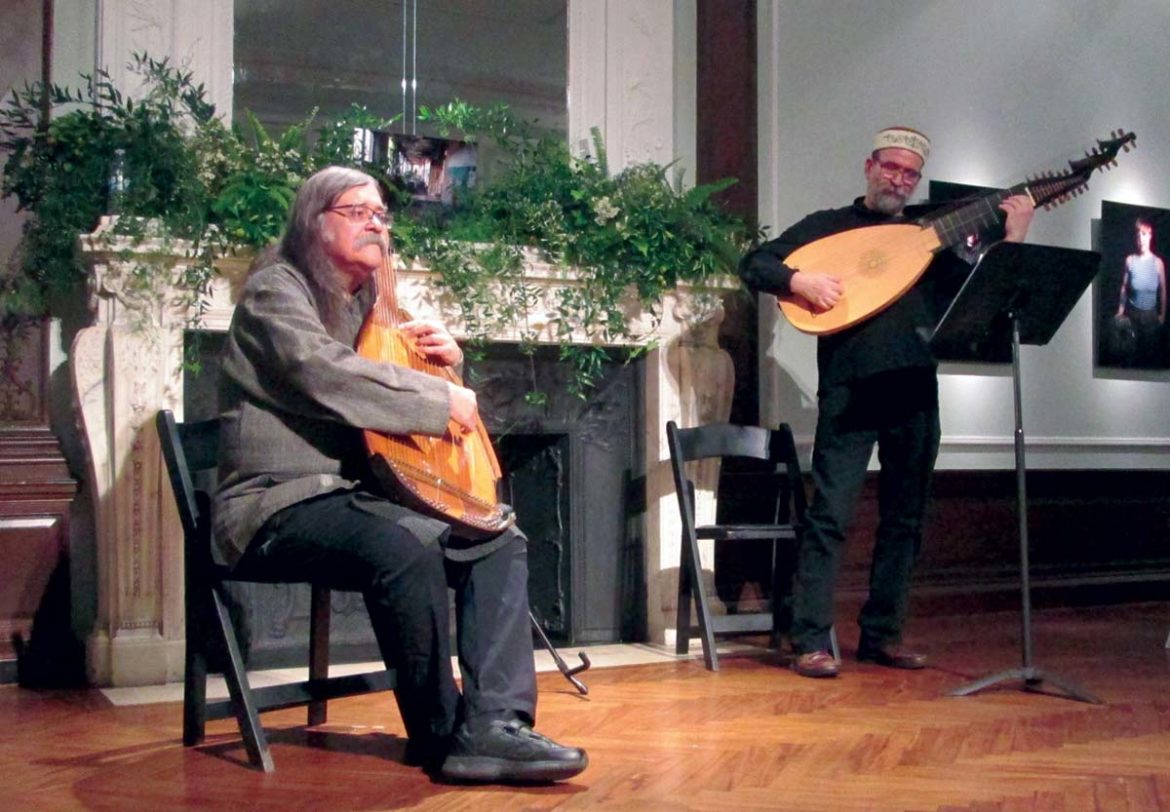 Julian Kytasty and Roman Turovsky perform “Songs From Ancient Ukraine” on February 1 at the Ukrainian Institute of America.

NEW YORK – The mid-season concert of the “Music at the Institute” (MATI) series at the Ukrainian Institute of America featured Julian Kytasty and Roman Turovsky performing “Songs From Ancient Ukraine.”

Presented on Saturday, February 1, the evening featured religious and secular musical selections from three periods: the Baroque, the transitional or parallel period, and the kobzar, lirnyk and romanticist period of the 18th-19th centuries.

The ambiance for the evening was set by Roman Turovsky playing “Prelude,” a piece from the Baroque period by Dmytro Tuptalo which he had set for playing on his torban.

That was followed by three kanty – songs usually of religious nature with moral content – from the late 17th century: “Jesus My Inspiration” (Tuptalo), “The Betrayed Lover’s Song” and “Beset by Enemies” (Trutovsky). These were sung by Julian Kytasty, his voice in mellifluous form, and accompanied by Mr. Turovsky on the torban. The final piece from this period was the “Epitaphion (On the Death of Tuptalo)” by Stefan Yavorskyj.

Taking up his bandura, and with Mr. Turovsky on the torban, Mr. Kytasty continued on vocals as the duo performed songs from the transitional period: “The Flood (Potop)” a traditional kobzar song; an 18th century dance tune “Bandurka” (collected by Trutovsky) about a Kozak wooing a woman who plays a bandura, with plenty of double meanings and innuendos in the lyrics; and an “Interlude” set by Mr. Turovsky. The musical interplay on “Bandurka” was particularly inspired, with Mr. Turovsky soloing on torban while Mr. Kytasty sang, and then his torban providing a solid foundation when Mr. Kytasty soloed on bandura between lyrics.

From the kobzar, lirnyk, and romantic period of the 18th and 19th centuries, the duo performed: “Bird in the Garden” (collected by Trutovsky); “Zhovta Ptashka” (Hryhory Skovoroda); “Daszkiewicz” (Tymosz Padura); “Sinner at the Gates of Heaven,” a traditional kobzar song heralding back to the moral lessons of the kanty; a traditional kobzar “tanets,” “A Tree on the Hill” (Skovoroda); and “Handzia z Samara” (Tymosz Padura).

The evening ended with a Q and A session with Messrs. Kytasty and Turovsky. Of interest were several questions about the instruments that each played.

The torban, a lute, played by Mr. Turovsky is a contemporary made instrument that is a replica of an instrument from 1765. It is a fretted multi-stringed instrument with a unique feature of stacked tuning heads. Listening to Mr. Turovsky playing, one was awe-struck by the euphonious tones the torban produced.

Mr. Kytasty played a bandura made by Yosyp Snizhniy that was later modified by Antin Chorniy. The exact origin of this unique instrument is shrouded in bandura history: it may have been made in the 1930s by Snizhniy when he was in Manchuria and then Shanghai and brought with him to Argentina, or, Snizhniy may have made it in the early 1960s in Argentina. With the modifications by Chorniy, the resulting instrument is a transitionary one that places it between a kobza and a concert bandura – it has more strings than the kobza, but fewer strings and no chromatics as are seen on a concert bandura. Its bright sound gave an authentic musical feeling to the material presented that evening.

As a performer, teacher, composer and ensemble leader, Mr. Kytasty has had an enduring impact on bandura not only in North America and Ukraine, but worldwide. His extensive discography includes the solo bandura recordings “Black Sea Winds” and “Songs of Truth” that present traditional kobzar music and contemporary improvisations on “Nights in Banduristan.” He has issued collaborative recordings of albums with Alexis Kochan, Michael Alpert and Derek Bailey, his own groundbreaking “Experimental Bandura Trio” and the recent electro-acoustic project “Disturbance Fields” with Kyiv composer Alla Zagaykevych. He works frequently as musical director with Yara Arts Group, creating and performing music for theater pieces, poetry performances and festivals. His work on Yara’s “1917-2017 Tychyna, Zhadan & the Dogs” earned him a New York Innovative Theater Award for best original score. He has also created music for film and for modern dance performances.

Mr. Turovsky has appeared as a lute soloist and continuo player in the Early Music line-up of Mr. Kytasty’s New York Bandura Ensemble and Radio Banduristan. He is a recipient of the 2008 New York State Council on the Arts grant. As a composer, Mr. Turovsky concentrates on the instrumental idiom of the Baroque lute and the torban, as well as viola da gamba and carillon. He has composed over 1,100 instrumental and vocal works influenced by his Ukrainian heritage and the Baroque period. Many of these have been premiered by Luca Pianca at international festivals in Spain, Portugal, Germany, Lithuania, Italy and France; by Roland Ferrandi in Corsica; by Simon Paulus in Germany; and by Jindrich Macek in the Czech Republic and Croatia. His compositions appear on recordings by Massimo Marchese, Christopher Wilke, Daniel Shoskes, Angelo Barricelli and Thomas Schall, among others.

The MATI series continues with two more concerts in the spring. Details for those are on the UIA website at http://ukrainianinstitute.org/events/list/