KERHONKSON, N.Y. – For more than 12 months, the Soyuzivka Heritage Center in Kerhonkson, N.Y., had rested in eerie silence, and for the second straight year, odds for the Soyuzivka Cultural Festival seeing light of day appeared slim indeed. But after many grim warnings regarding COVID-19 and mandated lockdowns, the Ukrainian community was parched for an opportunity to reconnect and to celebrate the cultural ideals that bind its members together. 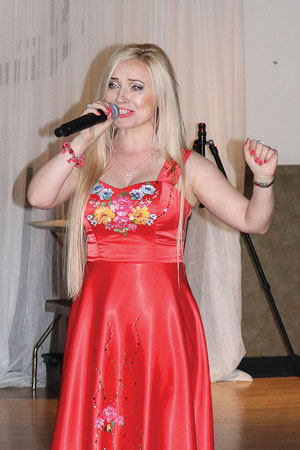 Only round-the-clock efforts enabled the dedicated organizers and sponsors to present a top-notch program on July 10, barely three weeks after New York Governor Andrew Cuomo gave the green light for large public events (Readers can learn more about that topic in the adjacent side bar). All of these issues were discussed during the festival’s VIP gala, held inside the Veselka auditorium on the evening of July 9.

VIP gala
Yuriy Symczyk, the chief operating officer of the Ukrainian National Association (UNA), spoke on behalf of the UNA, a long-time festival sponsor, about this eagerly awaited reawakening. He thanked Ukrainian National Foundation (UNF) Director Valentyna Tabaka for her unflagging efforts to schedule a solid artistic program and expressed his gratitude to Soyuzivka managers for their technical preparation. 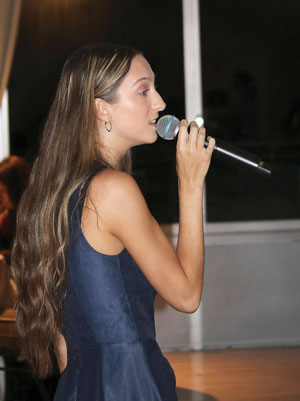 But Mr. Symczyk’s core message was directed at the attendees.

“You did well to come here,” Mr. Symczyk said. “We are all here to sing and dance and reconnect. No Skype or Zoom meeting can ever replace that; otherwise, our hromada would disappear through isolation. But after breathing the fresh, clean air of these beautiful surroundings and reconnecting with fellow Ukrainians, we’ll all return stronger and spiritually refreshed.”

The following speaker was Andrew Nynka, the new editor-in-chief of Svoboda and The Ukrainian Weekly. Mr. Nynka acknowledged the more than four decades of service of former editor-in-chief Roma Hadzewycz, and reminded those gathered that Svoboda is the oldest continuously published Ukrainian language newspaper in the world. Rather than settling for the mere survival of Ukrainian institutions and the diaspora community, Mr. Nynka insisted on a forward-looking agenda. 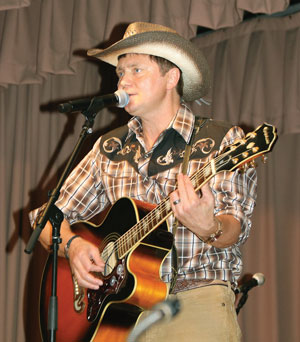 “I believe we can and must turn the conversation so that in the years to come we can talk about growth and success,” Mr. Nynka said. “What I see both in the United States and Canada are millions of people – and there truly are millions – who care deeply about Ukraine and Ukrainian causes. It is our challenge to figure out how to channel all of that passion and love for Ukraine and our diaspora into growth, so that our community no longer talks about surviving, but instead we talk about thriving.”

During the Gala, attendees enjoyed a special preview of several performers slated for the next day’s big stage. Vocalists Christina Yavdoshnyak, Anna Kosachevich, Anychka, Iryna Lonchyna, and “Ukrainian Cowboy” Liubomyr Chermak took turns entertaining the donor audience in styles ranging from pop and folk to ballad and country. The program was smoothly guided by the affable team of emcees, Andrij Dobriansky and Bohdan Tabaka, who traded quips as they introduced speakers and entertainers. 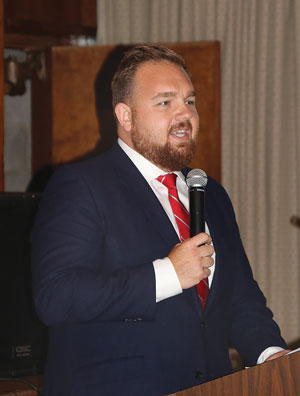 Additional donations were received from the Executive Board of the Ukrainian National Women’s League of America (UNWLA), Yaroslava Mulyk, Christine Nestor and the Erachshaw Family. Ms. Lisovych stressed that the UNA and the Ukrainian credit unions are the backbone of the Ukrainian community and she entreated everyone to become a member of those organizations.

“We’re lucky to be Ukrainian Americans. Be proud of our multi-heritage!” Ms. Lisovich said. 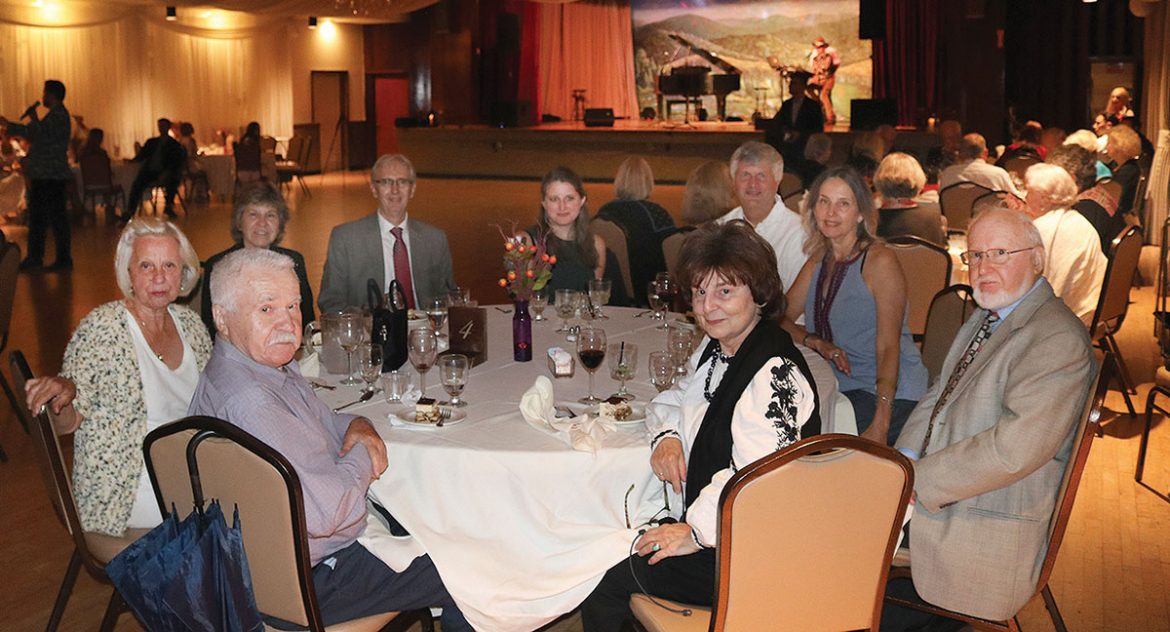 Members of the VIP gala enjoyed dinner and an intimate preview of the festival’s musical performances.

Festival concerts
The gods of weather served up a pleasant, sunny day on July 10, as vendors set up their stands and information stations along Poltava Road, including a special outdoor BBQ at the Veselka Gazebo. The afternoon program on the Veselka Patio featured vocalists Ms. Kosachevich, Ms. Yavdoshnyak, Mr. Chermak and Julia Busko, and the band Brattia z Prykarpattia. As emcees, Mr. Dobriansky partnered with Lydia Kulbida, anchorperson for News 10 ABC/ Fox 23 in Albany. They reminisced about their dance history together, which began with the Roma Pryma Bohachevsky (RPB) Dance Academy.

Members of the Roma Pryma Bohachevsky Dance Academy Workshop during their performance on July 10.

By early evening, spectators had begun to migrate to the main show, which was held on Soyuzivka’s lower slopes behind the pool. While many listeners arrayed themselves on rows of white chairs before the stage, others spread blankets, dotting the grassy hill above the tennis courts. 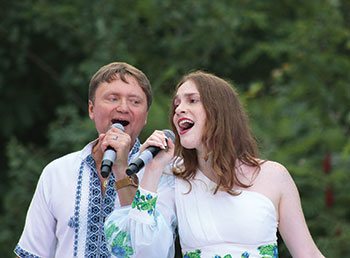 As always, the Ukrainian Veterans of America (UVA) honor guard presented flags for the national anthems (see sidebar). As the concert unfolded, it became clear that all five female vocalists were on the highest professional level and could have graced any stage in the world. And, once again, Mr. Dobriansky and Lydia Kulbida kept things flowing nicely.

Ms. Yavdoshniak and Ms. Kosachevich, reprising their performance from the gala, presented a wide variety of hit songs and both were enthusiastically acclaimed by the audience (see sidebar). 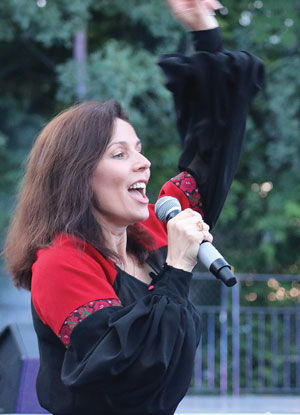 Also participating in the concert was Julia Busko, a rousing performer with an agile voice, who had previously performed at Soyuzivka. A finalist in the Chervona Ruta Vocal Competition in Ukraine, she sang the famous song the festival is named for (Volodymyr Ivasiuk’s “Chervona Ruta”), along with “Songs of Brave Girls” (Pisni Smilyvykh Divchat) and “Let Me Paint You the Stars” (Namaliuj Tobi Zori). In an interview with The Ukrainian Weekly, she bemoaned what she considers a primitive regression in many song entries for the Eurovision Contest. Ukrainian songs form the solid core of Ms. Busko’s repertoire, and she was thrilled to have her eight-month son hear her singing them that evening.

Ms. Lonchyna has also previously sung at Soyuzivka. A dynamic performer who loves to get close to her audience, she enjoys composing her own songs and has already released four albums. From the time she was in the first grade, Ms. Lonchyna always had a song on her lips. She shared with this author that her songs are “God’s children” – a conversation with God, and a light for all people. Two of her original songs are “This is My Ukraine” and “Let Me Light Up the Stars.”

Also performing at the event was Anychka, an impassioned vocalist with Lemko roots. At the Gala, she hearkened back to Polish Operation Wisla, which forcibly uprooted her ancestors and thousands of Ukrainians from their age-old Lemko lands. Her beloved Lemko folk songs comprise a central part of her repertoire, along with ballads and pop songs. The catchy syncopated Kucheri, Kucheri (O These Beautiful Curls) was an audience favorite. While on tour, she has devoted many concerts to benefit wounded Ukrainian soldiers and has been recognized by the Ukrainian Armed Forces for her commitment to the cause. A stylish performer, she accompanies her songs with expressive hand movements and gestures. 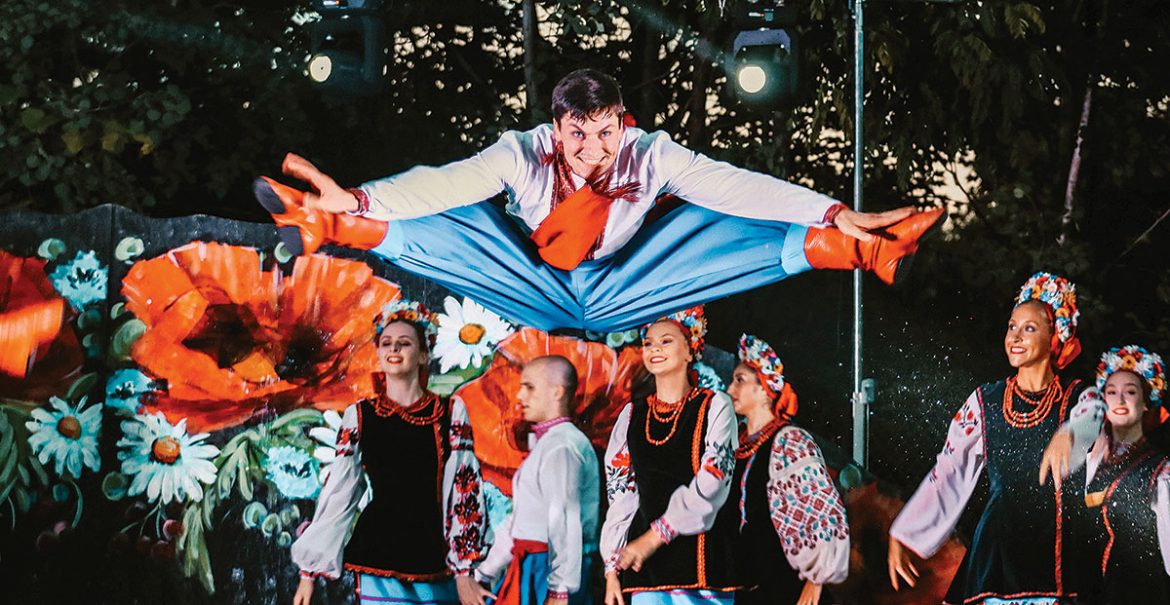 A dancer leaps during a performance of the Hopak.

­Trading in Ukrainian steppe ponies for American mustangs, Mr. Chermak appeared wearing his emblematic cowboy hat, to belt out his “country” style songs, composed by himself and his spouse, Nataliya. The audience was particularly delighted with one catchy tune, which rhymed “Tennessee” with “tsi pisni” (these songs)!

Gremo is singer and actor Alex Hramakouski. He was born in Belarus and became an arm wrestling and bodybuilding champion, while acting in Ukrainian movies, commercials and television shows. In 2015 he moved to the U.S., where he learned the Ukrainian language and began performing his Ukrainian compositions at festivals. At Soyuzivka, as elsewhere, his ensemble’s snappy songs captured the attention of the onlookers.

The festivities closed with a zabava dance and the Brattia z Prykarpattia band.