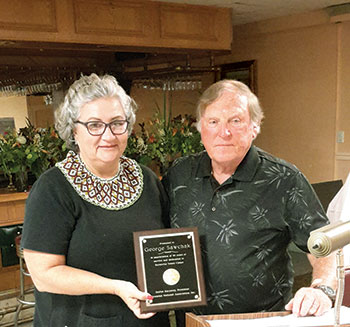 The Ukrainian National Association and Soyuzivka Heritage Center honored George Sawchak with an award for 50 years of service and dedication to the Soyuzivka Tennis Camp. The presentation was made by UNA Advisor Bohdana Puzyk.

Kerhonkson, N.Y. – Starting in the mid 1950s and for decades later, Soyuzivka was booming with visitors, especially tennis players, prior to the Labor Day weekend tennis tournaments. They came weeks before the event to practice and to enjoy Soyuzivka’s amenities.

In 1967, the Soyuzivka Tennis Camp was founded when the guests vacationing at Soyuzivka asked Zenon Snylyk, editor of The Ukrainian Weekly, three-time Olympic soccer great and avid tennis player, if he could prepare their children for the Labor Day tennis championships of the Ukrainian Sports Federation of the U.S.A. and Canada (known as USCAK, its Ukrainian-based acronym). Mr. Snylyk, in turn, invited George Sawchak, United Stated Tennis Association-ranked player in Pennsylvania, National Junior Tennis and Learning (NJTL) teacher and tournament organizer, to join him in instructing the group.

A few years later, as the popularity of the instruction increased, Wolodymyr Kwas, general manager of Soyuzivka, established the Soyuzivka Tennis Camp. The time and duration of the overnight camp evolved over time.  During the heyday of the camp in the 1980s,  the number of campers often exceeded 80 to 90. That’s how it all started, and the rest is history. 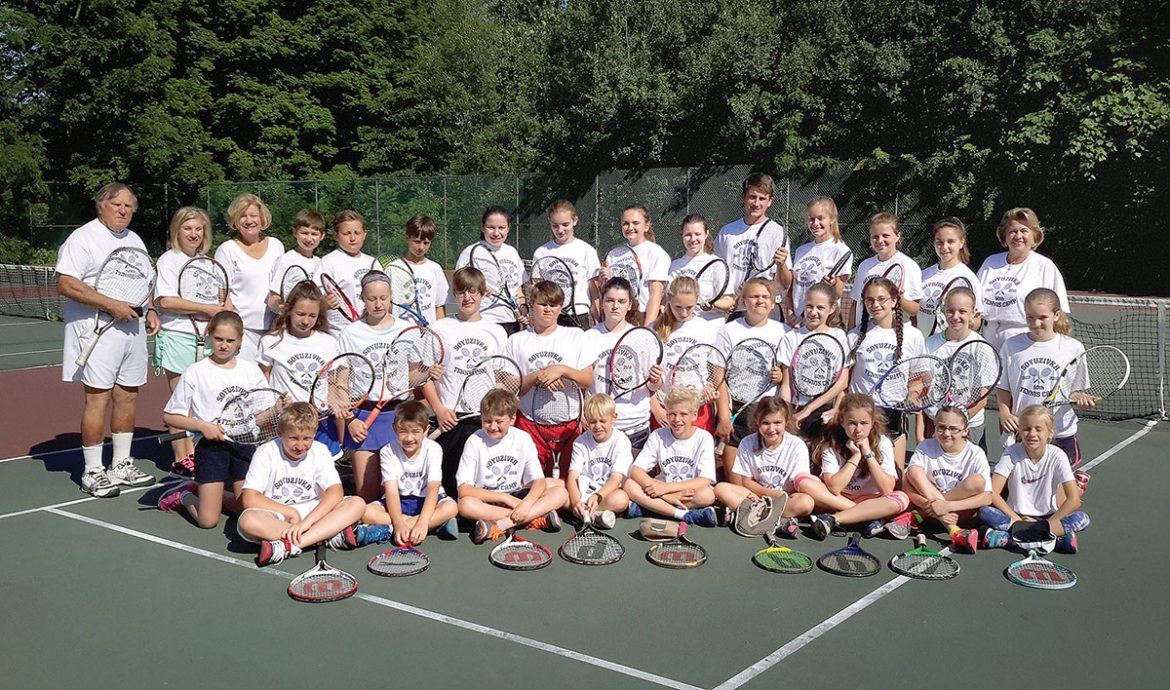 This year, the camp was held from June 19 to 30 at the Soyuzivka Heritage Center. The overnight campers (age 11-16) stayed at Camp Lviv, and they were joined by day campers (age 8-10) who lodged with their parents at Soyuzivka. The campers came from various states on the East Coast. Eleven had parents who had attended camp, and they represented various generations of Ukrainian American immigrants. What was so wonderful was that they bonded as a group and learned to play and work together.

The director of the camp is Mr. Sawchak, who is also heavily involved with the United States Tennis Association (USTA) Middle States Sectional Competitions as a player and sectional captain. He was assisted by Leda Kopach and Tetiana Sawchak, both collegiate players and past USCAK champions, and Don Kopach, also an accomplished tennis player and USCAK champion. Ms. Sawchak is also a U.S. Professional Tennis Association certified tennis professional. 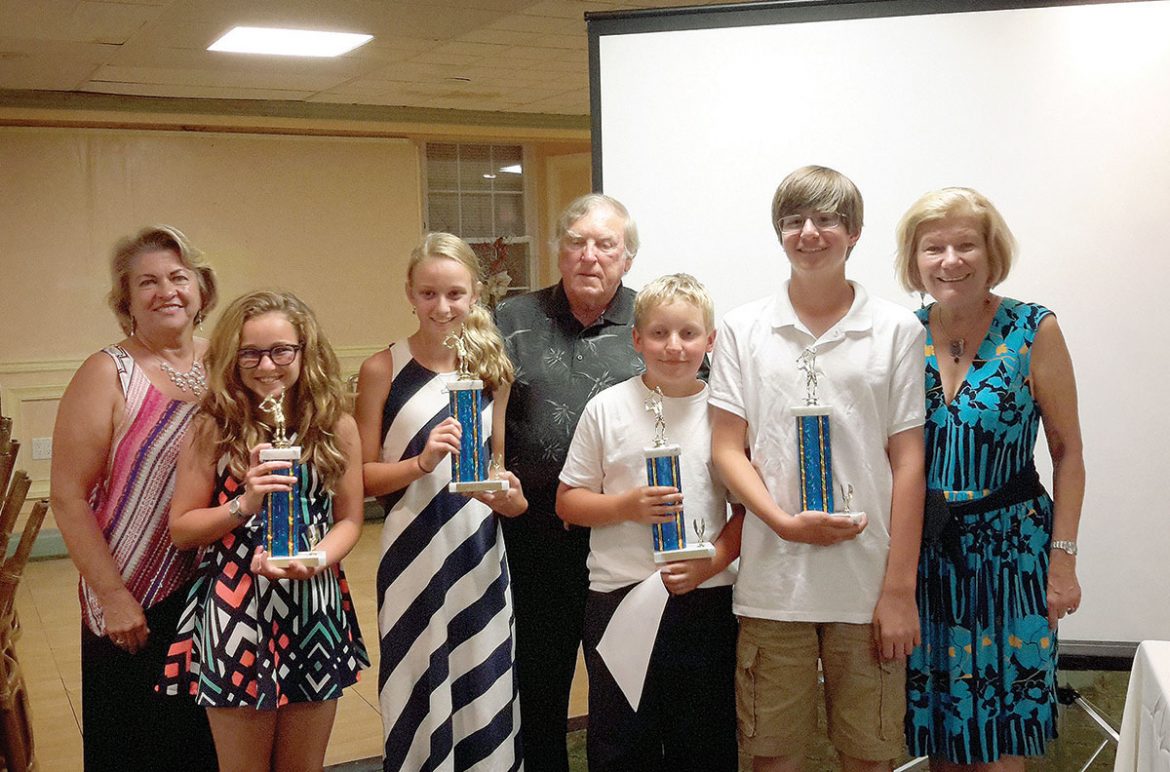 The dorm supervisor was a school teacher, Olya Czerkas; Petrusia Sawchak, an English teacher by profession, served as coordinator/administrator.

Counselors this year were Molly Bis from Michigan, Mary Hankewycz from Pennsylvania, Yana Skorobogatova from New York, and Christopher Bula from Florida.

There were usually three sessions of tennis instruction each day: 9 a.m. (following a series of exercises and jog), then at 2 p.m. and 7 p.m. during the first week. Instruction was given in the basics of tennis: proper strokes, serves, game strategies and court etiquette. The second week was devoted to tournament play.

Besides a concentration on tennis, there was also time for some off-court fun activities, such as swimming in the pool, watching movies, playing games and learning to dance the polka. This year, thanks to Assistant Manager Stefko Drabyk and the Soyuzivka staff, a large tent was erected outside of Lviv, complete with sofas, a large TV, ping-pong tables and a dance floor for the campers to enjoy. The campers really enjoyed this addition.

On Hutsul Night, which featured Ukrainian-style food and music, the campers wore their Ukrainian embroidered shirts to dinner. This is always a popular tradition with the tennis camp thanks to Soyuzivka Manager Nestor Paslawsky. Saturday night the campers were invited to the dance held on the Veselka patio to the sounds of a live band. 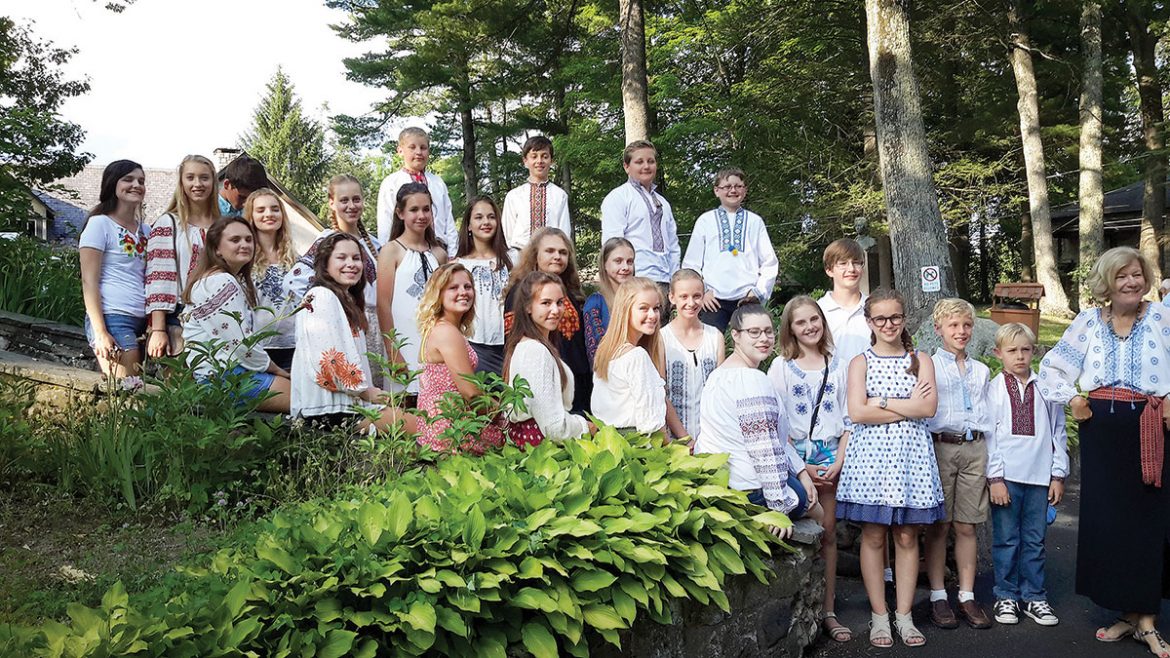 A banquet was held at the culmination of the camp for which everyone dressed up in their party clothes to receive their camp certificates. Tournament winners received their trophies that evening.

In the Boys Group: Markian Nychka won first place with a tie for second place between brothers Danylo and Lucas Bula.

The coveted Best Campers Awards were decided by the entire tennis staff based on outstanding behavior both on and off the courts. The winners were Adam Bis, Marko Mazur, Natalia Bula and Sophia Nikelberg.

Bohdanka Puzyk, advisor of the Ukrainian National Association, presented George Sawchak with an award in appreciation for 50 years of service and dedication to the Soyuzivka Tennis Camp on behalf of UNA President Stefan Kaczaraj (who could not be present), and the Soyuzivka Heritage Center and its management.

“Today, we acknowledge your important contribution – 50 years of inspiring and encouraging young people to love the sport, tennis, and instilling in them values athletics encourages: discipline, persistence, a sense of fair play and hard work – all attributes which will help these young people in their life’s journey.

“We acknowledge the excellence and quality of your teaching, as well as your deep regard for the development of our youth. Here’s to the next 50!” 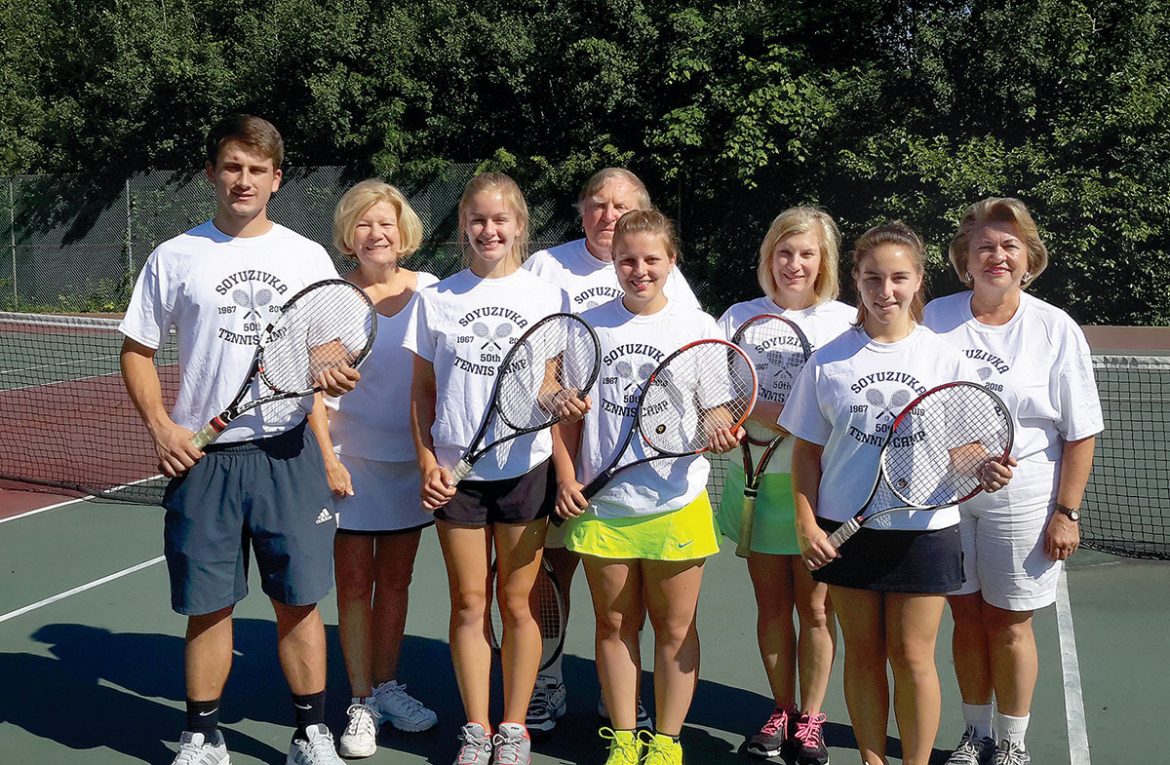 The Soyuzivka Tennis Camp staff of 2016.

Adding a note of levity, the counselors presented funny awards to the campers. Mrs. Czerkas presented a slide show of photographs of the campers, which was most appreciated.

At the end of the program, Mrs. Sawchak invited everyone to attend the 50th Soyuzivka Tennis Camp Anniversary Celebration to be held during the weekend of October 1-2 (with banquet on Saturday night) at Soyuzivka. It will be a fun time to reminisce about the camp with old friends. (More information about this will be given later in The Ukrainian Weekly and Facebook.)

A dance followed the banquet program, and the evening concluded with the singing of “Nich Vzhe Ide” or “Night is Falling.”