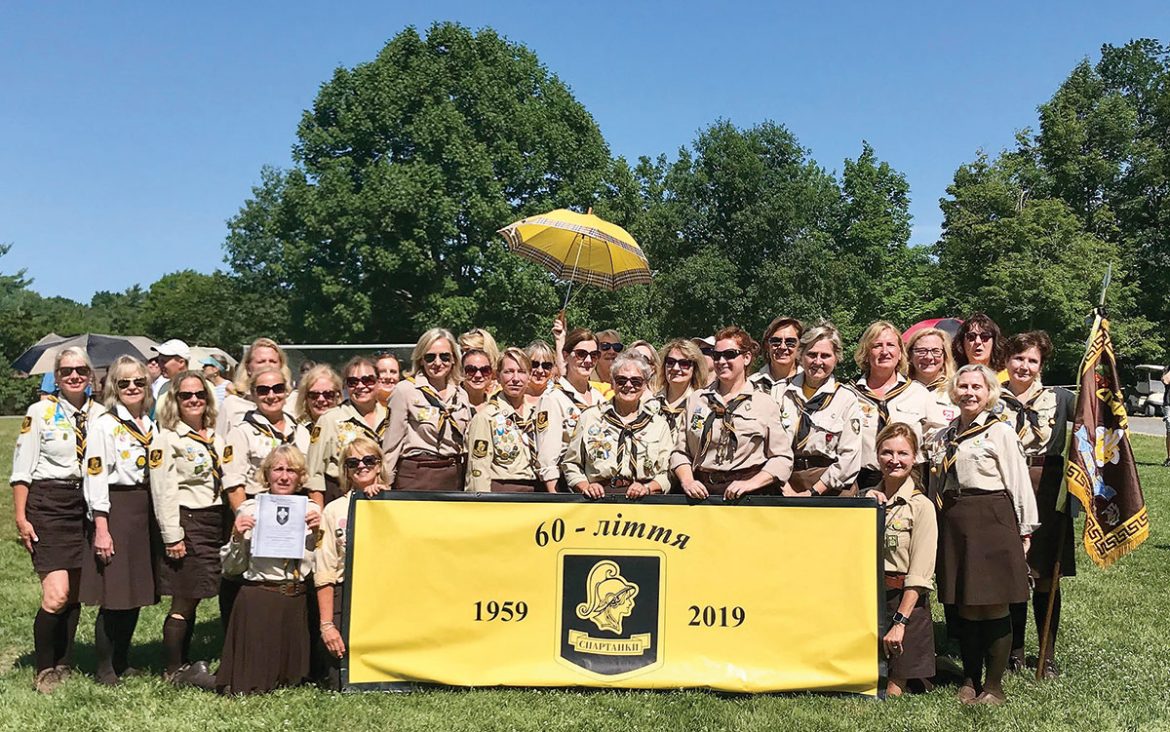 Spartanky mark the 60th anniversary of the sorority during the “Den Plastuna” (Scout Day) closing ceremony.

EAST CHATHAM, N.Y.  – Members of the Plast Scouting sorority Spartanky recently celebrated two milestones in their history of service to Plast: the 60th anniversary of the establishment of the sorority’s younger branch and the 25th anniversary of “Pochatkoviy Tabir,” or Beginner’s Camp, a camp founded and led by the sorority since its inception.

For 60 years, the Spartanky sorority has been actively engaged in myriad projects within the Plast and local Ukrainian communities that promote self-discipline, dedication and perseverance in Plast’s youth members by organizing events that promote physical fitness, health and wellness. In addition, the sorority’s efforts include cultural and environmental works held at camps, Plast branches and community centers.

Among signature activities of the sorority are its annual summer volleyball tournament (previously held in Wildwood, N.J., and now at Soyuzivka) and its annual youth ski outing in March where young scouts are able to earn merit badges for skiing and boarding. For the past 20 years Spartanky provided the teenage campers at the Vovcha Tropa campground the opportunity to fulfill the requirements of the Plast physical fitness badge.  Ecologically conscious Spartanky have also made it their mission to support eco-friendly practices at Plast campgrounds, including providing the labor to maintain and enhance the Vovcha Tropa hiking trails.

In addition, senior Spartanky partner with their younger sorority sisters to provide yearly assistance in running the Vovcha Tropa campground as medical volunteers in the camp infirmary, and as camp administrators and counselors and leaders.

The Spartanky sorority’s roots date back to 1927 in Ukraine, when the sorority organized sports events and camps in the city of Stryi, located in the Lviv Oblast.  Due to historical circumstances – World War II, the prohibition of Plast on Polish-ruled Ukrainian lands and emigration – the activities of these first Spartanky were ended prematurely.

In the fall of 1959, a group of 13 close-knit friends from Chicago resurrected the short-lived but legendary Spartanky from Stryi. By 1972, the Chicago Spartanky welcomed new members from the New York and New Jersey region. Over time, new members joined from cities like Boston, Hartford, Philadelphia, Syracuse and Washington. A Spartanky senior division with members age 35 and older was established in 1994, and has expanded each year since.

On Sunday, July 21, during “Den Plastuna” (Scout Day) at the Plast Vovcha Tropa campground in East Chatham, N.Y., the Spartanky commemorated their 60th year of activity with a series of events under the coordination of the current sorority president, Irene Sawchyn Doll, and the 60th anniversary committee, chaired by Laryssa Nahnybida and Zenia Olesnycky.

To start the celebration, at the start of the three-week camps, the Spartanky donated 44 sports balls to augment the games and sports programs that take place on the busy Vovcha Tropa campground.

During the 2019 Scout Day (Den Plastuna) weekend, a ribbon-cutting ceremony took place for a newly enhanced nature trail that leads to the boy scouts’ campsite.

Thanks to the efforts of the Spartanky Ecological Committee, chaired by Slava Hatala, in collaboration with Irene Leush Bihun and her husband, Yurij, Zenia Olesnycky and Larissa Montecuollo, there are now signs along this trail identifying a variety of trees and plants in Ukrainian, Latin and English. 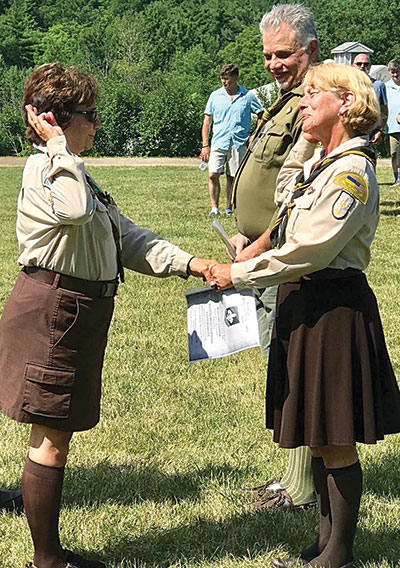 At the formal Scout Day closing ceremonies, two Sparatanky were honored for their tireless dedication and work within Plast Ukrainian Scouting Organization. Taliа Danish was awarded the highest rank of “Kerivnytstvo” (Leadership) in Plast for her 16 years as president and vice president of the New York City branch of Plast. Daria Patti was awarded the medal of St. George in Silver in recognition of her many years of service as manager of the Vovcha Tropa camp.

Following the closing ceremonies, delighted campers and visitors were treated to a BBQ lunch of hamburgers, hot dogs, side dishes and cool beverages served by a team of Spartanky and husband helpers led by Roma and Nestor Maksymovych. More than 400 campers and parents enjoyed the lunch, as well as an afternoon of exhibitions featuring Spartanky activities. Guests had an opportunity for a “Today I’m a Spartanka” photo-op, organized by Kiki Zinych and Lydia Prokop.

Later that afternoon, the sorority commemorated its second major milestone: the 25th anniversary of “Pochatkoviy Tabir,” or Beginner’s Camp. 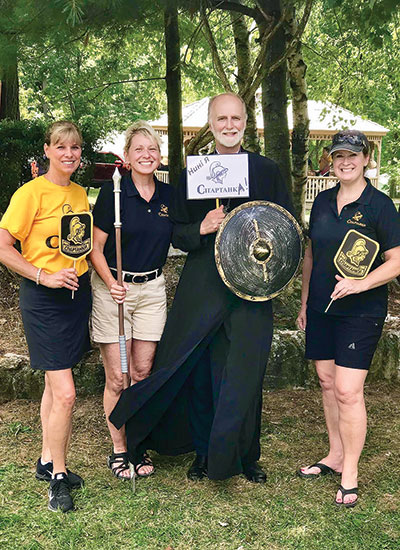 For the past 25 years, a one-week Beginner’s Camp for children age 6-7 has afforded them the opportunity to experience an abbreviated Plast camp complete with educational nature hikes, arts and crafts, evening sing-alongs around the campfire, sports and games, and the favorite activity of building secret hideaways in the woods. Petrusia Kotlar Paslawsky initiated this one-week Beginner’s Camp in 1994 because she observed a reluctance among some parents  to send their youngest scouts to a three-week sleep-away camp. Spartanky such as Christa Kozak, Chrystyna Mandicz Centore, Oresta Olexy and Ms. Bihun,  as well as other Spartanky, were instrumental in conducting 40 iterations of the camp, sometimes running two to three tours in a single season.

Today there are over 70 members of the Spartanky senior division. These community-minded Spartanky have taken on leadership roles by devoting their time, talent and energy to such organizations as the Ukrainian National Women’s League of America and Ukrainian Medical Society of North America (UMANA), as well as other organizations and committees in Ukrainian schools and Ukrainian community centers throughout New Jersey, Pennsylvania, New York and Illinois.

Equally impactful are the ranks of the junior divisions of the Spartanky sorority – with the strong presence of active members both in the United States and Ukraine.

The U.S. junior division of Spartanky has an active membership of 30 young ladies with their ranks growing rapidly.  Among their signature activities is the testing of older scouts for the requirements of the Physical Fitness Badge at the Vovcha Tropa campgrounds, and the annual volleyball tournament on Labor Day weekend at Soyuzivka Heritage Center.  This group is also engaged in philanthropic activities with fund–raising events that include hosting workout classes and an annual karaoke night.

The junior division in Ukraine was established on April 12, 2008, and its current 26 members belong to Plast branches in Lviv and Ternopil. Like their North American sisters, the Spartanky from Ukraine arrange sports events such as the Spartan Games, winter trips called “Hoverliana” and co-organize a vigorous survival skills camp called “Kvest.” 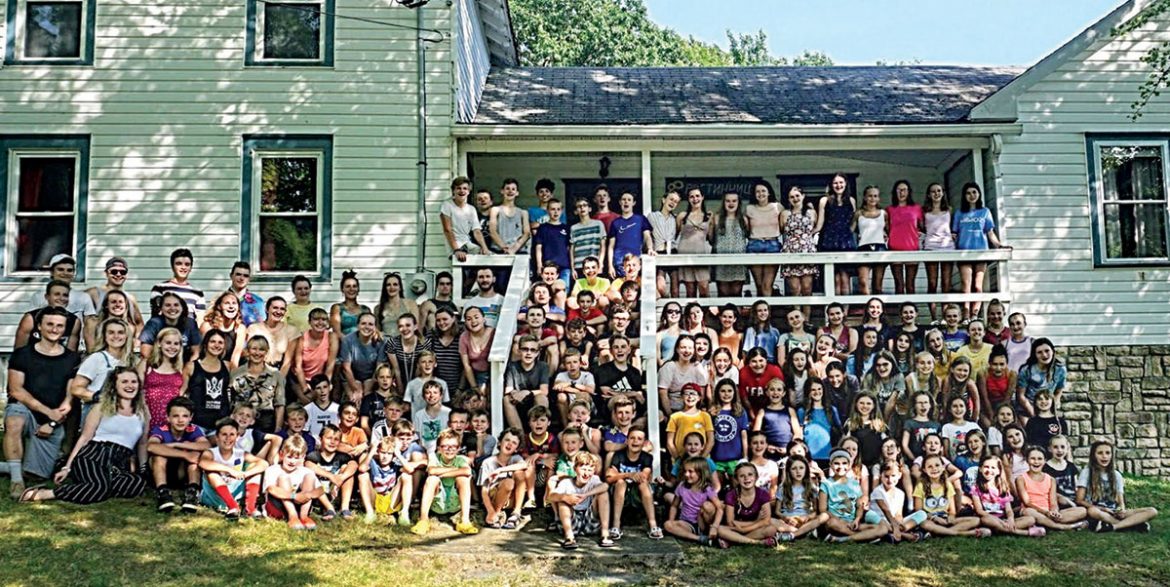 A gathering of 150 counselors and participants at this year’s scout camps at Vovcha Tropa who once had attended Beginners’ Camp.