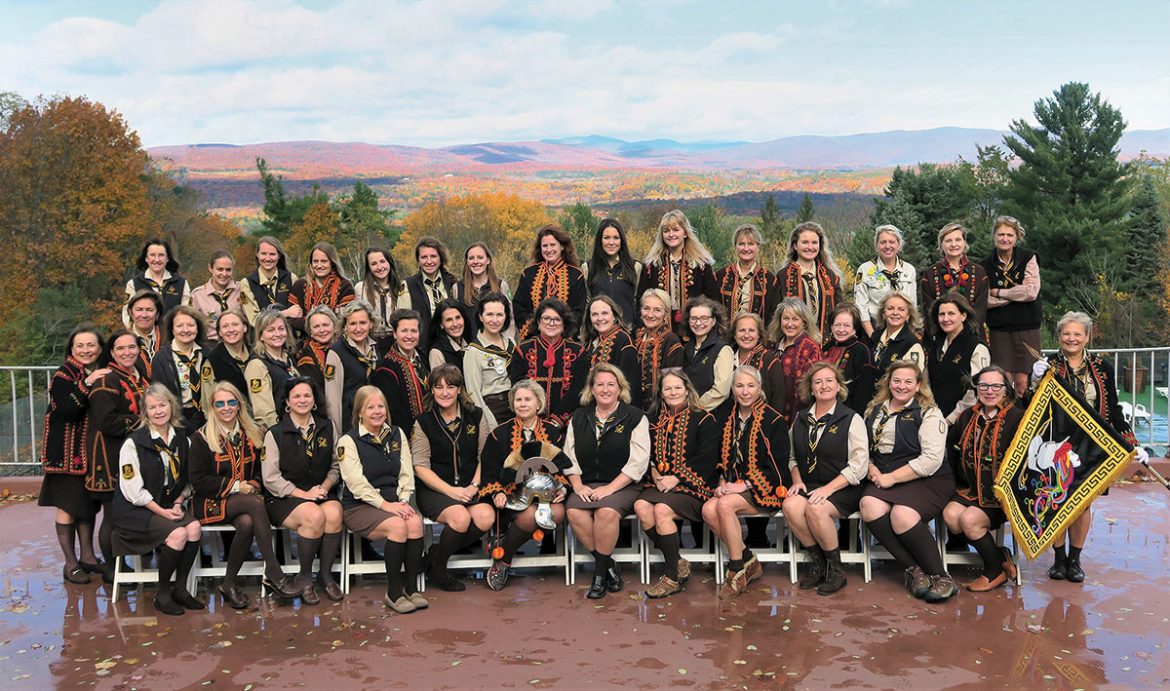 Spartanky at their 2018 annual conference on Soyuzivka’s balcony overlooking the Catskill Mountains.

KERHONKSON, N.Y. – The Spartanky sorority of Plast Ukrainian Scouting Organization held its annual conference on November 2-4 at the always scenic Soyuzivka Heritage Center. As in years gone by, delighted exclamations of joy were heard from the Main House lobby as approximately 45 participants greeted each other with gleams in their eyes and warm embraces.

A sisterhood that spans decades beginning from friendships mostly formed at Plast camp to present day, the Spartanky sorority comprises members who are hard-working university students, busy parents (and some grandparents), doctors, educators, engineers, business leaders, and other notable professionals who visibly cherish these timeless bonds.

This year’s conference was a multigenerational event with the presence of the younger branch of Spartanky (between the ages of 19 and 34), including an expectant mother who recently moved to the United States from Lviv. There is currently a very active branch of the Spartanky sorority in that western Ukrainian city. Moreover back in 1912, Lviv was the birthplace of Plast; today it is home to over 3,000 members of Plast – the largest branch to date.

The conference weekend was not only productive, but also illuminating. Thanks to the efforts of Lesia Kozicky, the Spartanky had an opportunity to discover their inner artistic aptitudes with a painting lesson. The subject of the painting was a campfire in the woods – a fitting choice since during camp, Ukrainian scouts typically gather nightly to sing songs and perform jovial skits. For those who may have been a bit apprehensive to take the paint brush in hand, stylish black berets and mustaches were provided to facilitate an evening of unbridled artistic expression.

For the 2018-2019 year, the Spartanky are making plans for their many annual projects including: the winter hike, Ecology Club outreach, Soyuzivka volleyball tournament, Horseback Riding Camp, St. Andrew’s Eve for teen scouts, testing for the Plast physical fitness badge, and the one-week Beginner’s camp for 7-year-olds (Pochatkoviy Tabir) at the Vovcha Tropa campground.

The Spartanky will also be celebrating their 60th year as a Plast sorority. The inspiration for this group comes from the important role Spartan women played in Ancient Greece. Spartan women trained in gymnastics and in overall physical fitness. Furthermore, they had the right to own property – a right not given to women in other parts of Greece at that time.

It is this axiom of not just strength and commitment to aid in the character development of Ukrainian youth that beckons these women to service for the overall betterment of local Ukrainian communities. Such a commitment to service is recognized through promotions in rank within the Plast organization. It was gratifying to witness Vira Myskiw becoming a recipient of such a promotion during the weekend.

Lastly, it was only fitting that Soyuzivka’s own Marianka Hawryluk of Kerhonkson was warmly inducted into the Spartanky sorority as a full member. Just as poised and eloquent as when emceeing on stage at a Soyuzivka concert, Ms. Hawryluk expressed what it meant to her to join this sisterhood. Sorority members were moved by her words and grateful to be together again to share in this auspicious occasion.