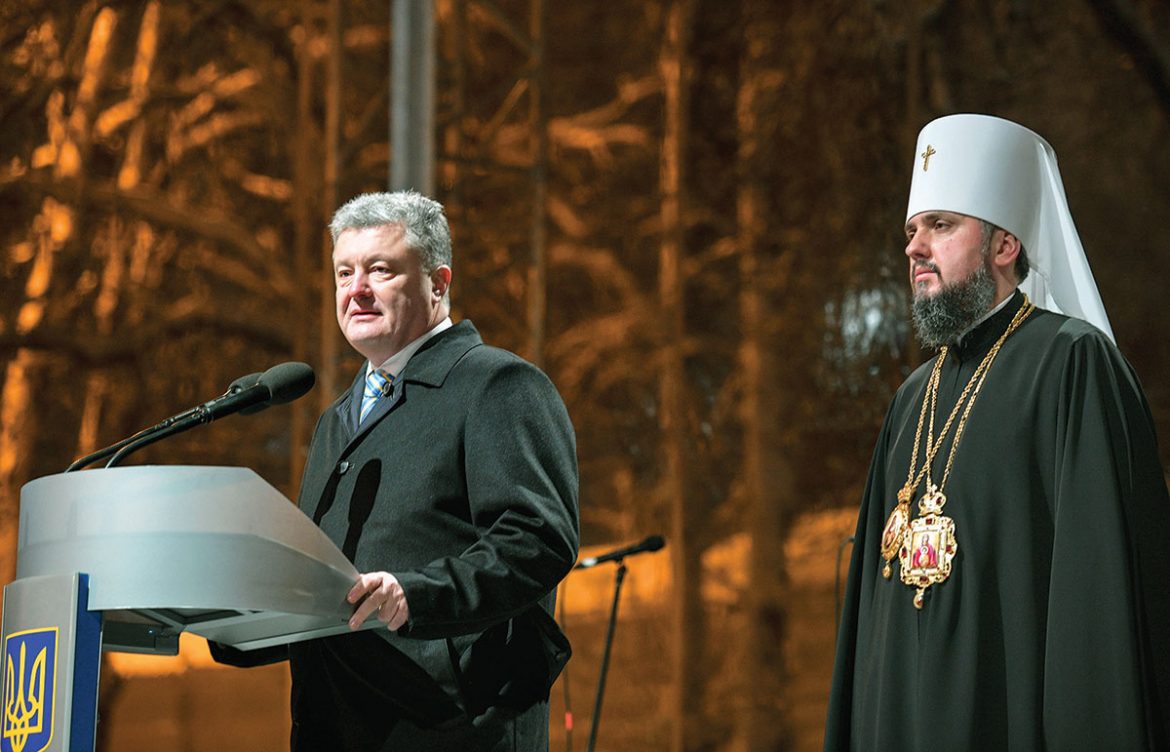 President Petro Poroshenko addresses the multitudes gathered at St. Sophia Square after the election of Metropolitan Epifaniy (right) was announced.

Below is the text of the speech delivered by President Petro Poroshenko of Ukraine on December 15, when the results of the Unification Synod (council) of the Ukrainian Orthodox Church were announced. (The text was posted on the Official Website of the President of Ukraine.)

I congratulate everyone on the creation of the Ukrainian Autocephalous Orthodox Church, which has just happened in St. Sophia.

Your Eminence! Your Eminences – distinguished representatives of His All-Holiness Ecumenical Patriarch Bartholomew! Your Holiness! Your Beatitude!

Fellow Ukrainians, dear and distinguished community convened on St. Sophia Square, witnessing the most important lines of the chronicle of Ukraine!

Such a great event is happening today.

People say it is very cold in the streets. But each of you over several hours of tense expectation was warmed by your heart and thrill of anticipation of a great epochal event.

Dear friends, you are not witnesses. You are the creators of history, which is now happening. You are the direct participants of this great sacrament, which has just happened inside St. Sophia Cathedral. The cathedral that Yaroslav the Wise, the son of the Equal-to-apostles Prince Volodymyr the Baptist, built a thousand years ago in honor of the victory over the eastern horde. That is why your presence here, your mass support was extremely important for all the members of the council. Frankly, I felt it, being among delegates at the invitation of His All-Holiness Patriarch Bartholomew.

Today is December 15. I ask everyone who is watching us now: in Ukraine, all over the world – remember very well. This day will enter or has already entered the history of Ukraine as a sacred day, the day of the creation of the Autocephalous Orthodox Church of Ukraine. The day of the final gaining of Ukrainian independence from Russia. And Ukraine will no longer drink, as Taras Shevchenko said, “Moscow’s poison from the Moscow’s bowl.”

This is the day of the creation of the Church recognized by the world Orthodoxy as an independent structure – just as in the vast majority of countries belonging to the Orthodox Christian tradition.

All representatives, the autocephalous council of the UOC-Kyiv Patriarchate, the cathedral and all the hierarchs of the UAOC, a group of bishops of the UOC – Moscow Patriarchate have just founded a united Church.

This miracle came true due to the steadfast position of His All-Holiness Ecumenical Patriarch Bartholomew, our Constantinople Mother Church. It took advantage of the unconditional canonical right to heal the wounds inflicted on the Ukrainian Orthodoxy by several centuries of Moscow’s domination. 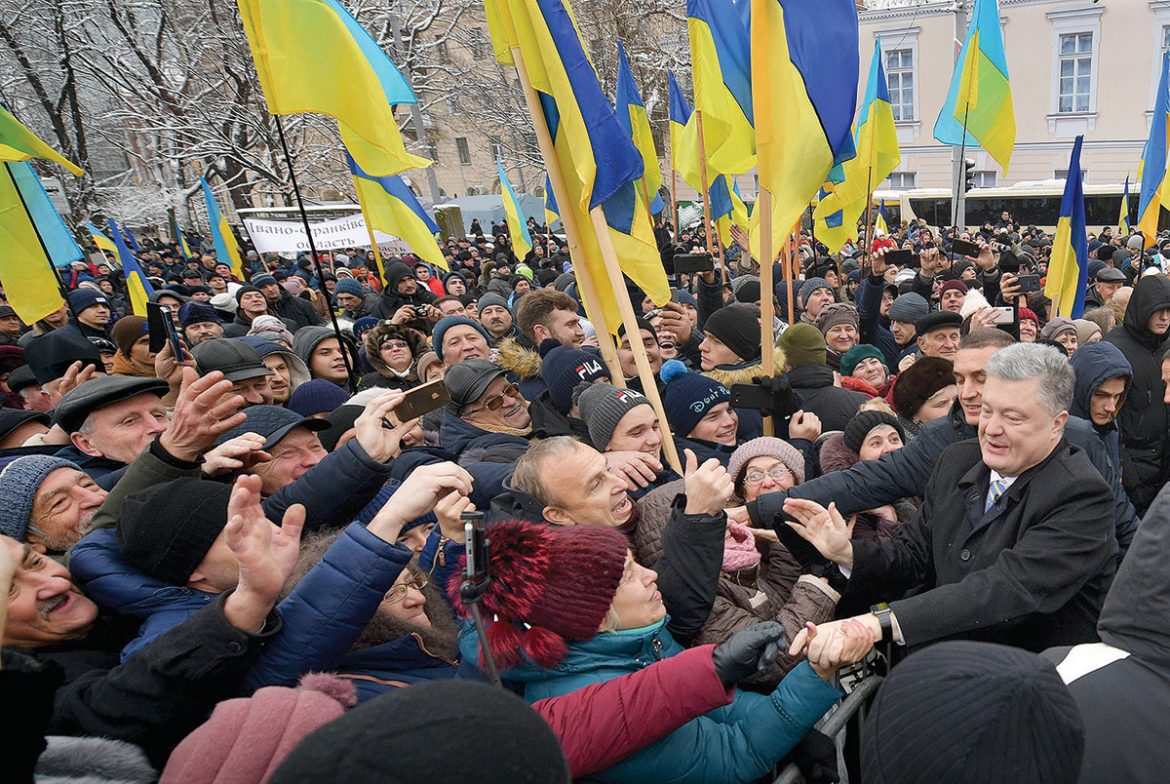 President Petro Poroshenko is greeted by the crowd gathered to hear the results of the Unification Synod of the Ukrainian Orthodox Church.

Our talks were long-lasting. But over this year His All-Holiness and the Synod decided step by step to provide autocephaly. This is the first. Second, they approved the draft of the Tomos, certificate of independence. Third, they lifted all the unjust Moscow penalties from Ukrainian bishops, which got out of the control of the Russian Orthodox Church at the dawn of independence and began to build structures of an independent church. And fourth, they confirmed the illegality of the annexation of the Kyivan Metropolitanate by Moscow, which was carried out in the 17th century. They, like us, do not recognize any claims of the Russian Orthodox Church to Ukraine.

Therefore, as a result of the decisions of the Mother Church, the firm political will of secular authorities, the president, the Parliament, which supported the president’s appeal, and most importantly of the Ukrainian people, due to the responsible position of the hierarchs of the three Orthodox jurisdictions today, a new united and independent Ukrainian Orthodox Church was born.

Yesterday, in social networks, I read a very interesting opinion: “The Church does not only sing and pray. The Church raises a true Ukrainian citizen.” And then I recalled the phrase traditionally attributed to Otto von Bismarck: “Generals do not win the wars. The wars are won by school teachers and priests.” Of course, it should not be understood literally. It is about the unique role of the clergy and teachers in the formation of the nation and in the process of state-building.

We are now creating an independent Ukraine. And this event is as important as the referendum on our independence adopted more than 27 years ago.

And what kind of citizen will be raised by the Church center, if it is located in a foreign state, moreover, in the aggressor country? Exactly not a citizen of Ukraine. The Kremlin does not hide the fact that it considers the Russian Orthodox Church as one of the main instruments of influence on Ukraine. The situation in Ukrainian Orthodoxy is discussed at the Russian Security Council under the chairmanship of its president. Instead, the Ukrainian state is required not to interfere in its own Ukrainian affairs.

And when Moscow speaks about Ukraine as allegedly its canonical territory, isn’t this an encroachment on our territorial integrity? And aren’t we obliged to protect Ukrainian soil and the Ukrainian spirit in such conditions?

And we know well: in the areas where the Russian censer is being waved today, Russian missiles will strike tomorrow. At first, Patriarch Kirill toured Ukraine with the propaganda of the “Russian peace” and a single font, and then their tanks came. Obviously, the issue of autocephaly goes far beyond the Church’s fence. This is an issue of our national security. This is an issue of our statehood. This is an issue of the world politics. It is not a surprise that all the state leaders with whom I met over the past six months asked me: “What about your Church?” We enjoy huge and important support in this issue all over the world.

And when the Russian president said that the collapse of the USSR became for Russia the main geopolitical disaster of the 20th century. “For Putin,” as Myroslav Marynovych wrote very well, “The provision of autocephaly to Ukrainian Orthodoxy is the second geopolitical disaster.” But let me correct it; this time, the scale is not of the century, but of the millennium. Let them know that.

Today is a common holiday of the Orthodox, Greek-Catholics, Roman Catholics, Protestants, Jews, Muslims. In short, for all who value the freedom of Ukraine. Who value our independence. No patriot doubts the importance of having an independent Orthodox Church in an independent Ukrainian state. Such a Church is a spiritual guarantor of our sovereignty. In December 1991, at the referendum, we approved the Declaration of Independence. In December 2018, an independent Orthodox Ukrainian Church was founded, to which the Ecumenical Patriarch will hand over the Tomos.

Autocephaly is part of our state pro-European and pro-Ukrainian strategy, which we have been consistently implementing for almost five years. All this is the basis of our own way of development, development of the state of Ukraine and development of our Ukrainian nation.

“Russian comrade, don’t mess with Ukraine!” – I quoted [Vladimir] Mayakovsky in August 2016 at the parade on the 25th anniversary of independence. And our Armed Forces are getting stronger every day. And it’s not a joke!

“Farewell, unwashed Russia” – I said on European Square when we gained the visa-free regime. I quoted [Mikhail] Lermontov. Farewell indeed.

“Farewell to you, our tender Misha, go back home to your wood of fairy tales” – these words were addressed to Moscow in autumn this year. Farewell indeed.

“Away from Moscow! Europe now!” Now these winged phrases of the Ukrainian writer of the beginning of the last century Mykola Khvyliovy have become part of our political dictionary. And they precisely convey the essence of our state strategy, our confident course towards the European Union and NATO.

Allow me from all of our community, from all of Ukraine and the Ukrainian people to express gratitude to Ecumenical Patriarch Bartholomew for his incredible care for Ukraine.

I want to thank all Ukrainians who believed in autocephaly from the outset, who supported the president, the chairman of the Verkhovna Rada, the Parliament, supported our hierarchs and fought for the autocephaly even when the very idea seemed illusory.

First of all, I also want to thank our hierarchs and leaders of our Orthodox Churches. His Holiness Filaret. Your Holiness, do you hear this reaction of people on the square? Your Holiness, the extent which can measure the contribution of Patriarch Filaret to the struggle for our own Autocephalous Church has not been invented yet. You were, are and remain the spiritual leader of the Ukrainian Church, the spiritual leader of the Ukrainian people.

I want to thank Primate of the UAOC Metropolitan Macarius and the whole episcopate for a firm position and an extraordinary role in this historical process.

I want to thank the hierarchs of the UOC – Moscow Patriarchate, who, despite the pressure, threats and curses of Moscow and its fifth column, made a courageous decision and came to the council today. Everything is very simple – they chose Ukraine between Ukraine and Russia. And we commend this choice.

We did not have, do not have and will not have a state Church. The state will not interfere in Church affairs. And nobody will “invite” anyone by force to the Orthodox Church consecrated by the Tomos. Once again, I emphasize that this is an issue of free choice for each believer. I guarantee that the authorities will respect the choice of those who, under certain circumstances, decide to remain in the church structure, which will maintain unity with the ROC. But I also guarantee that the state will protect the rights of the priests and believers of the UOC – Moscow Patriarchate, who voluntarily decide to leave Moscow in order to create, together with other Orthodox, the Ukrainian Autocephalous Orthodox Church.

Such a Church has been founded today. It needs some time for its development, peaceful expansion and strengthening. Let me now introduce to you the newly elected primate, Metropolitan of Kyiv and All Ukraine Epifaniy. It will be his honorable mission to go to Constantinople with the Ukrainian president in early January and get the long-awaited Tomos. Bishop Epifaniy, representative of the younger generation of bishops, was nominated by the UOC – Kyiv Patriarchate and supported by the representatives of other Churches. But now there is no such division. That division does not matter anymore, because a united Church is being created.

The power of our people is in unity. God, give us unity! There is such a prayer and it is very relevant to today’s events.

Unity is what will give us victory.

I sincerely congratulate you on autocephaly and the achievement of our spiritual independence.

We have stopped the aggressor. We have saved the state. We have built a capable army. We affirm the Ukrainian language as a component of the strength and success of our people.

We will certainly win!

Glory to God and Glory to Ukraine!

And now, with pleasure, I give the floor to the primate of the united Church, Metropolitan of Kyiv and All Ukraine Epifaniy.