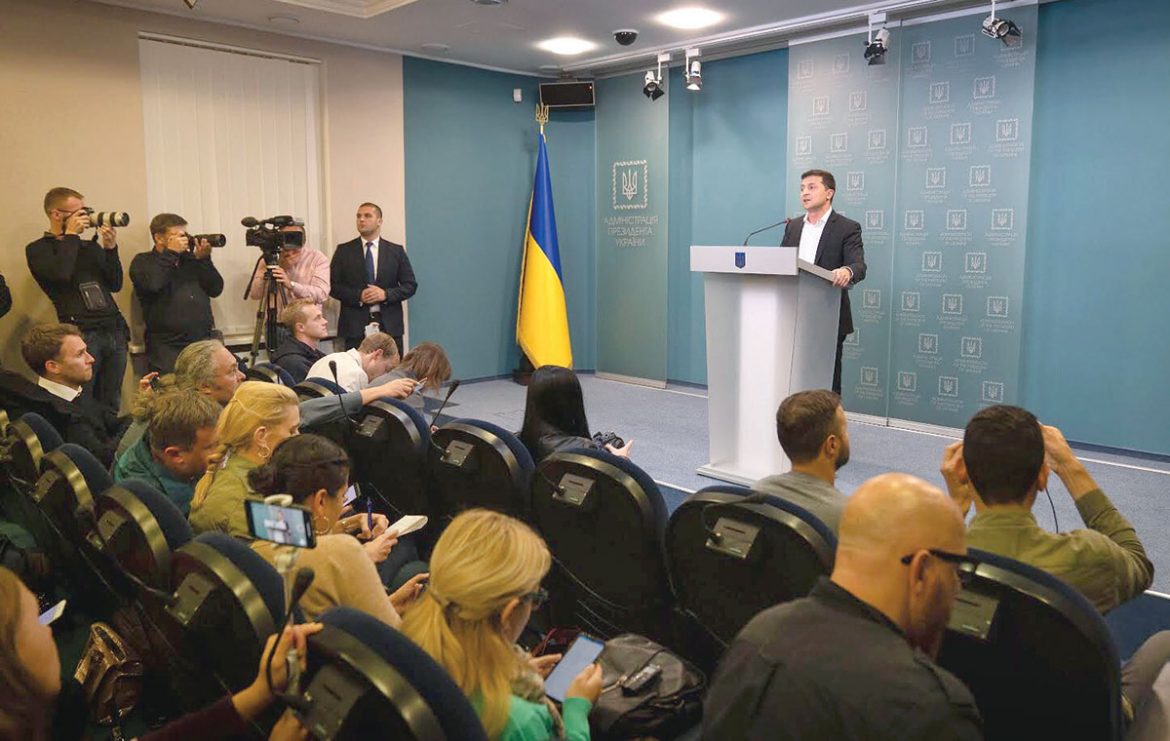 President Volodymyr Zelenskyy speaks at a press briefing on October 1, after he announced that Ukraine had agreed to accept the Steinmeier formula as the basis for negotiations to end the war in the Donbas.

KYIV – Since President Volodymyr Zelenskyy’s difficult trip to New York on September 24-26, a series of developments in Ukraine has generated anxiety, division and even a wave of protests. In addition, the first major split in the ranks of the Zelenskyy administration has emerged, as its most senior security official, Oleksandr Danylyuk, blew the whistle and called on the controversial head of the Presidential Office, Andriy Bohdan, to resign.

First, there was the sudden resignation at the end of last month of two key figures – the U.S. Special Representative for Ukraine Negotiations Kurt Volker and Secretary of the National Security and Defense Council (NSDC) Danylyuk. Although not directly related, their departures have raised serious concern about the circumstances in which they left and the implications for Ukraine.

Ambassador Volker, who was greatly admired in Ukraine as its strong supporter, was caught up in the unfolding political battle between the Democrats and the Republicans, and the launch of an impeachment inquiry against U.S. President Donald Trump. The envoy is allegedly implicated in President Trump’s search for compromising information against his political opponent Joe Biden.

Many of Mr. Volker’s colleagues and friends in Ukraine and the United States were quick to praise his work. Former Ukrainian Minister of Foreign Affairs Pavlo Klimkin said the special envoy did much more for Ukraine than was foreseen in his mandate. He told Liga.net that Mr. Volker, while working closely with Ukraine’s European partners, had a much firmer grasp of what is at stake in the Russo-Ukrainian conflict than those who today are applying “enormous pressure” on Ukraine “to agree to the Steinmeier formula.” Mr. Klimkin said he believes that in future talks with the U.S. administration the question of “return[ing] Kurt” should certainly be raised.

Mr. Danylyuk’s announcement also was a shock. With a reputation for being committed to reform and the solid experience of having been a minister of finance, he was one of the most respected members of the team that Mr. Zelenskyy hastily assembled when making his successful bid to win the presidency.

If Mr. Volker’s resignation was linked to internal U.S. political infighting, the departure of Ukraine’s NSDC secretary was connected to the power struggles and battles for influence that have been going on from the very outset within Mr. Zelenskyy’s disparate team.

Much of that appears to revolve around the role of President Zelenskyy’s right-hand man and head of his Presidential Office, Mr. Bohdan. His apparent immense influence, given that he was the attorney of the notorious oligarch Ihor Kolomoisky, has been a growing source of concern both within Ukraine and beyond its borders.

The oligarch has recently become very active publicly and is fighting in the courts to undo the decision made in 2016 to nationalize “his” PrivatBank, the largest in Ukraine, after billions of dollars went missing. Mr. Danylyuk and the former head of the National Bank of Ukraine, Valeria Gontareva, were instrumental in implementing the bank’s takeover by the state.

Last month, on the eve of the arrival of an International Monetary Fund (IMF) mission to Kyiv, Ms. Gontareva became the victim of a series of mysterious attacks on her and her home. On September 19 Mr. Danylyuk publicly sided with her in pointing the finger at Mr. Kolomoisky; he warned that such actions cause destabilization in the country.

For the IMF, the health of Ukraine’s banking sector and what happens to PrivatBank are of central concern. The court hearing to address the Kolomoisky case was scheduled for September 24 but has been repeatedly postponed. The IMF mission departed on September 25 after inconclusive talks with Ukraine’s new authorities, who have proclaimed their determination to bring economic recovery and growth. On October 1 Kyiv’s business court again postponed the Kolomoisky hearing until October 8.

Mr. Danylyuk has since begun explaining why he resigned. Initially, he revealed to the BBC in Ukraine that while tensions between himself and Mr. Bohdan were indeed a factor, the main reason was to warn against “the wrong decision in the PrivatBank process.” If the nationalization of the bank is reversed, it will have dire consequences, he said, and will block cooperation with the IMF. It will send the wrong signal that oligarchs still call the shots. He stressed that there should be no compromise with Mr. Kolomoisky, because awarding him “a certain amount of compensation” will also be a defeat.

Asked if he thought that Mr. Kolomoisky was influencing Mr. Bohdan, Mr. Danylyuk said he preferred not to comment. Nevertheless, he added: “Let’s look at what’s going on. It’s not about personalities. There’s a systemic problem. There are people who have a conflict of interests, and Andriy [Bohdan] is one of them.” He also pointed to what he called the lack of professionalism on the Zelenskyy team.

Reading between the lines of Mr. Danylyuk’s comments, it is clear that that he was unhappy with the Zelenskyy administration’s style of work. He intimated that the president’s close inner circle seemed to think they could and should decide everything. “I consider the state should function in a different manner, without someone pulling the strings.” There should be “strong institutions” and proper “professionalism,” Mr. Danylyuk commented.

But the Danylyuk story was quickly overshadowed by developments around the terms demanded by Russia as a prerequisite for agreeing to participate in a new summit of the Normandy Four (Germany, France, Russia, Ukraine), namely, agreement that the “Steinmeier formula” (see The Ukrainian Weekly, September 20) be used as the basis for discussions on the way forward towards a peaceful resolution of the war in the Donbas.

In essence, this was an initiative proposed by the German side in 2015-2016 to jump-start the moribund peace process that the first and second Minsk accords of 2014 and 2015 were meant to have initiated. The focus was on two components of the initial road map, namely that free elections are to be held in the occupied areas and that simultaneously Ukraine would permit a measure of self-governance for them. No details on the sequence and logistics were elaborated, hence the different interpretations on the priorities and modalities advanced by Kyiv and Moscow.

After resisting for some time, but facing considerable pressure from France, Germany and, presumably, the Trump administration and others, Kyiv finally agreed to the Steinmeier formula. President Zelenskyy convened an unexpected press conference on October 1 to confirm this and to announce that a new law on local self-governance for the areas in question would be prepared. He and his representatives have been at pains to assure the Ukrainian public that there is nothing to worry about, that clear red lines had been drawn by the Ukrainian side and that there should be no fear of capitulation before Moscow.

But the absence of concrete details and the sense that Ukraine is being isolated and pressured, even by its partners, has invited speculation and fueled strong concern. Former President Petro Poroshenko and other opponents of the Zelenskyy administration have seized on the issue and depicted the acceptance of the Steinmeier formula as tantamount to betrayal.

On October 2 Mr. Poroshenko tried to convince the Ukrainian Parliament that the Steinmeier scheme never existed and was made up by Moscow. He has dubbed it “Putin’s formula.” Meanwhile, his opponents have posted videos of him announcing in October 2016, when he was president, an agreement to establish working groups to develop the Steinmeier formula.

In short, the absence of proper details about how the Steinmeier formula will be discussed at the next Normandy Format meeting expected to be held later this month in Paris, and the political maneuvering around it, has resulted in this issue being depicted in black or white terms and in inflamed emotions. This has resulted in a wave of protests in Kyiv, Lviv, Kharkiv, Mariupol, Kryvyi Rih and other cities.

On October 3 Mr. Zelenskyy released a video, trying once again to reassure his critics and the general population that he has no intension of yielding on key issue concerning Ukraine’s independence and territorial integrity. In the meantime, Ukraine’s Western partners have welcomed its decision to accept the Steinmeier plan as a new starting point and called it a potential breakthrough.

But the leaders of the Russian-backed “separatist” enclaves, the self-proclaimed Donetsk and Luhansk “people’s republics,” have certainly not been sounding a conciliatory note or suggesting they want to be part of Ukraine. On October 2 they issued a joint statement declaring that, by “guaranteeing a special status for the Donbas” through the acceptance of the Steinmeier formula, Ukraine is recognizing “the special right of the people of the Donbas to independently determine their fate.” They urged the Ukrainian president “not to dictate conditions to us.” They alone will decide when elections will be held, and Kyiv “will not receive any control of the border.” They advised Mr. Zelenskyy that if he is interested in “peaceful co-existence” with them, he would have to enter into a direct dialogue “and not make ill-conceived and meaningless unilateral statements.”

Commentators pointed out that such strong language is unlikely to have been used without the agreement of the Kremlin.

In this tense setting, there were further surprises. On October 3 President Zelenskyy announced that Mr. Danylyuk would be replaced by Oleksiy Danilov, who was serving as his deputy. He is a controversial former mayor of Luhansk who was dismissed after being accused of corruption. Commentators have lost no time in pointing out that this is a strange choice to fill such a highly sensitive post. Attempts to learn from the NSDC why Mr. Danilov was considered qualified for this position were rebuffed.

That same day Mr. Danylyuk had more to say on the evolving situation. Speaking again to BBC News Ukraine, this time he also acknowledged that the Steinmeier formula entails “enormous risk” for Ukraine. He stressed the need to keep the nation informed, especially the troops on the frontline whom he said he had just visited.

Mr. Danylyuk also indicated that Mr. Bohdan had blocked his reform proposals and that they had very different values. In Mr. Danylyuk’s view, given Mr. Bohdan’s conflict of interest, he should do the “professional” thing and resign to allow President Zelenskyy to move ahead with reforms and ensure the system is managed properly.

In short, the Zelenskyy administration is facing its most serious tests yet, both at home and abroad. To weather the storms, Mr. Danylyuk and others insist that professionalism and integrity will be required to a greater degree than hitherto foreseen by Ukraine’s neophyte leaders.