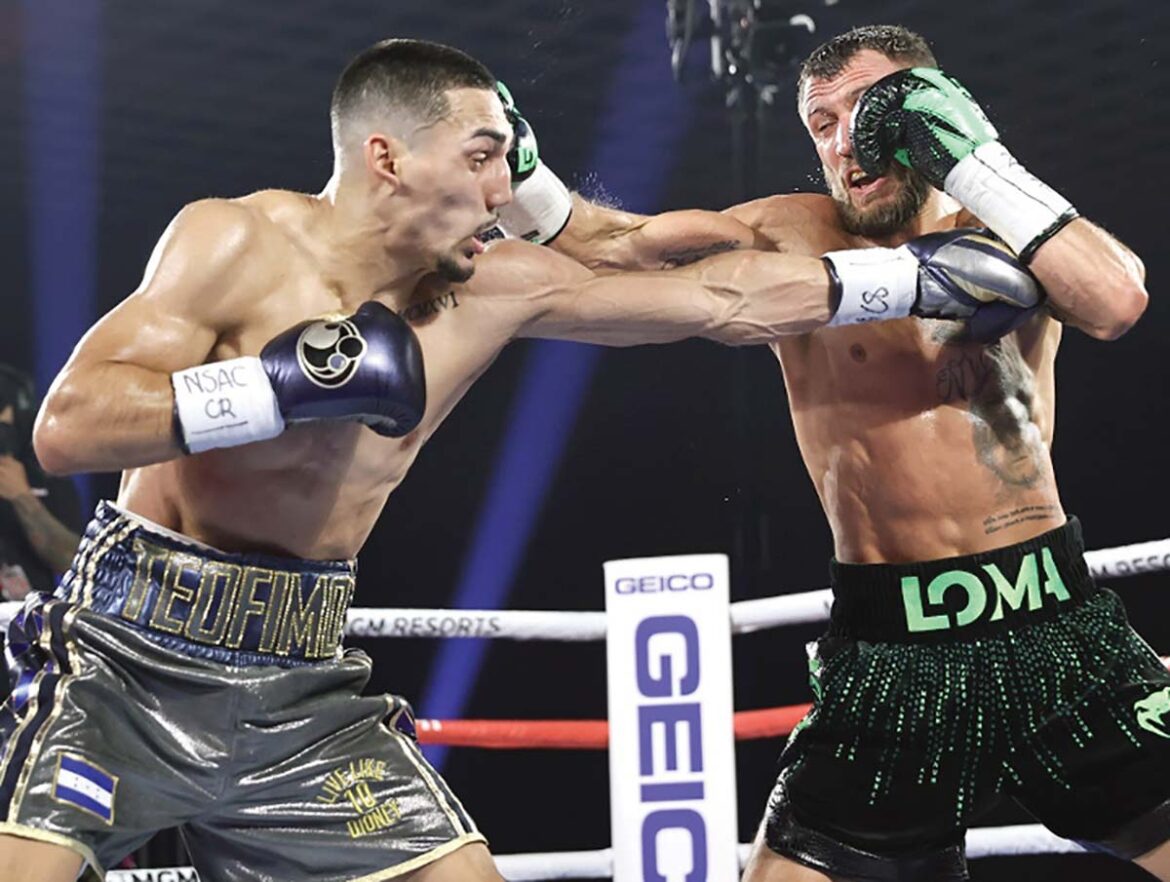 Lightweight Vasyl Lomachenko (right) avoids a jab by Teofimo Lopez during their bout at the MGM Grand in Las Vegas.

There were three basic reasons to explain Teofimo Lopez’s upset unanimous decision over Vasyl Lomachenko: the Ukrainian champion went up against a superior opponent, his defensive strategy for the first half of the bout cost him in the end, and his long layoff was very noticeable and took its toll. The result was a new, undisputed lightweight king over 12 tense rounds inside the MGM Grand Conference Center in Las Vegas on October 17. After a strong start, Lopez successfully overcame a late Lomachenko rally to win by scores of 116-112, 117-111 and 119-109.

The fight was dominated early by Lopez’s boxing, the youngster taking control in the center of the ring by utilizing his educated left hand and hitting Lomachenko repeatedly with well-placed body shots that had the smaller in size Ukrainian backing up. This allowed Lopez (16-0, 12 KO) to build a big lead on the scorecards as he neutralized Lomachenko’s (14-2, 10 KO) graceful movements behind his left jab.

Most of the first half of the fight saw Lomachenko moving around the ring with few aggressive offensive tactics. Lopez impressed with his technical expertise and poise, actually outboxing the master boxer for long stretches of the bout.

Lomachenko certainly did not give up without a fight, sensing he was behind, especially entering the latter stages of the match. He began to ramp up the pressure in the seventh round, starting to close the gap on Lopez, round by round. “Loma” consistently hit him with quick, laser-like left hands, very much slowing Lopez’s momentum.

Whereas Lopez won five of the first six rounds (Lomachenko took the second), the Ukrainian champion was credited with all but one of rounds seven through 11 on many scorecards, making it close to a draw heading into the final round.

A late statement was needed by one of the boxers in the 12th round to break a potential stalemate and win the bout. Lopez made it in the last round, keeping the pressure on, landing several significant right-hand power shots, stopping Lomachenko in his tracks. An inadvertent clash of heads creating a gash over Lopez’s left eye briefly stemmed the tide.

Lacking in experience, Lopez capitalized on his speed and accuracy to force the 32-year-old Lomachenko into a shell for almost the entire initial six rounds. His defense on point throughout, Lomachenko looked rusty after a 14-month layoff and he felt enough of his opponent’s power early to prevent him from moving forward, while Lopez was fresh. Lopez landed more punches than Lomachenko (183-141), while throwing more than twice as many punches (659 to 321). Lopez landed 148 power punches to only 78 by Lomachenko.

A dejected Lomachenko did connect on 45 percent of his power punches over all, becoming the aggressor in the final five rounds of the fight. He appeared on his way to winning the last round by being first on the attack with clean combinations until Lopez did damage with a left hook and continued to pile on his own power shots until the final bell.

Upon hearing the news his 13-fight winning streak had come to an end, Lomachenko left the ring in anger and frustration. He stated that he felt he should have been declared the winner, having dominated the last six rounds. His plan was to return home and review the fight.

Lopez became the first fighter in the four-belt era to become an undisputed champion in the lightweight division.