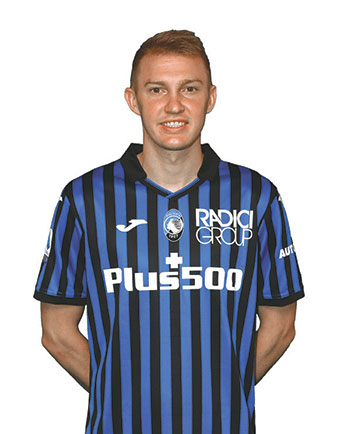 Kovalenko signs multi-year deal with Atalanta
Atalanta FC (Bergamo, Italy) announced on February 1 the transfer of FC Shakhtar Donetsk midfielder Viktor Kovalenko, and Shakhtar also confirmed that the 24-year-old footballer (he turns 25 on February 14) will continue his career in Italy, but the clubs did not disclose the details of the agreement. According to the Transfermarkt website, the transfer amount was 700,000 euros, contracted for four years and six months until June 30, 2025. Kovalenko, a graduate of the FC Shakhtar Academy, made his debut in the premier team in the 2014-2015 season. He played 200 official matches for the club in all tournaments and scored 32 goals. As part of Shakhtar, he won 10 trophies: he won the Ukrainian league and cup four times, and the Ukrainian Super Cup twice. Kovalenko joins Ruslan Malinovskyi, a Ukrainian who also plays in Atalanta (since July 2019). In the first half of the current season, Kovalenko took part in 11 matches and started in five. He scored four goals in that time, more than in the whole of the previous season (2010-2020). Kovalenko’s market value, according to ProFootballDB (BeSoccer’s database), is a lot higher (valued at more than 1 million euros) than what Atalanta paid. The move could include some variables which would explain the low fee.

Surkis fined 50,000 hrv by UAF
Dynamo Kyiv soccer club president Ihor Surkis was fined 50,000 hrv by the Ukrainian Association of Football’s (UAF) Control and Disciplinary Committee and was warned by them of the possibility of more severe punishment. The decision was announced on January 22 of this year, and was prompted by an August, 2, 2020, television interview, which the UAF has called a case of recidivism, for behavior that damages the reputation of football and the UAF and contains signs of violations of the UAF’s Code of Ethics and Fair Play.

Ukraine draws Group C for Euro 2022
The UEFA Euro 2022 tournament will include Ukraine in Group C with matches on June 13 against the Netherlands, June 17 against North Macedonia and on June 21 against Austria. The draw was made in Zurich on December 7, 2020.

Kherson draws Inter in knock-out round
Prodexim Kherson won 5-1 against Shkupi (Macedonia) on January 16 in Zaporizhia as part of the Round of 32 of the UEFA Futsal Champions League. Kherson advanced to the Round of 16 against Inter FS (Spain) on February 19. Petro Shortuma of Prodexim is the top goal-scorer of the tournament with seven goals. Thus far, Roninho (of Georgia) who plays for Prodexim is the second-place top goal-scorer with four goals; Mykhailo Volaniuk and Mykhailo Zvarych of the Ukrainian club are second-best in assists (with four each) for the tournament.

Ukraine draws Group 1 in Euro 2022
In the UEFA Futsal Euro 2022, hosted by the Netherlands, Ukraine in Group 1 won 10-3 against Albania on January 31. Other matches for Ukraine include: Croatia on March 2 and March 7; Denmark on April 6 and 8; and Albania on April 10.

Mytrofanov wins after 10 rounds
Super Welterweight Dmytro Mytrofanov (9-0-1, 5 KO) won by unanimous decision after 10 rounds against Asinia Byfield (14-4-1, 6 KO) of Great Britain on December 18, 2020, at the AKKO International Center in Kyiv. Mytrofanov, who is promoted by K2 Promotions Ukraine, won the vacant WBO Oriental Super Welterweight title and the judges scored the fight 96-94, 99-92, 98-94.

Usyk targets interim WBO title in March bout
Heavyweight Oleksandr Usyk (18-0, 13 KO) is tentatively scheduled to fight against Joseph Joyce (12-0, 11 KO) of Great Britain on March 27, with a location to be confirmed, somewhere in Great Britain. The 12-round bout is to determine the interim WBO title holder, prior to the first leg of a title unification fight between Anthony Joshua (24-1, 22 KO) and Tyson Fury (30-0-1, 21 KO) that is scheduled for May 29 that is expected to crown an undisputed heavyweight champion (four titles on the line: WBC, WBA, WBC, IBF). The winner of the Joshua-Fury fight will have 180 days to fight the winner of the Usyk-Joyce fight for the interim WBO heavyweight title. 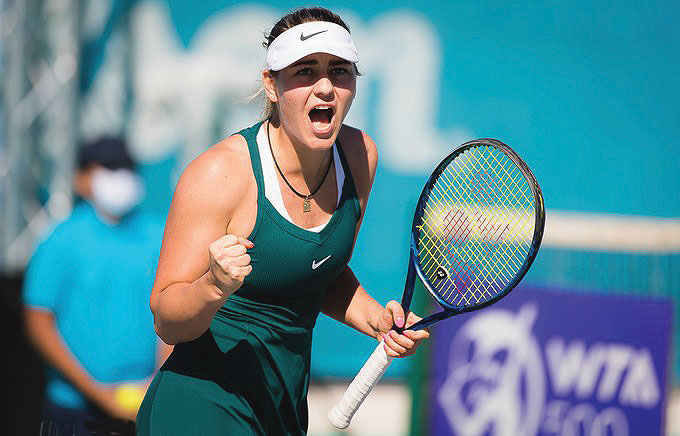 Marta Kostyuk advances to the semifinal of the Abu Dhabi WTA Women’s Open.

Kostyuk reaches semifinal at Abu Dhabi
Marta Kostyuk reached her first career semifinal after defeating Sara Sorribes Tormo of Spain, 0-6, 6-1, 6-4, in the quarterfinals of the Abu Dhabi WTA Women’s Open on January 6-13. This was the 18-year-old Ukrainian’s maiden WTA Tour-level semifinal. Kostyuk also won against Lucie Hradecka, 6-2, 6-4 (round of 64), Su-Wei Hsieh, 6-3, 6-7, 6-3 (round of 32) and Tamara Zidansek, 6-1, 6-1 (round of 16). In the semifinal match against Russian Veronika Kudermetova, Kostyuk came close before losing, 6-7(8), 4-6. Kostyuk had a 3-1 lead in the first set, only to have Kuderme­tova take the next four games. A tie-break ensued with Kudermetova claiming it 10-8. An early 2-0 lead in the second set saw Kostyuk recover to get back at 3-2, only to have the Russian withstand a barrage of forehands and prevail, 6-4. Kudermetova had previously eliminated Ukrainian Elina Svitolina in the quarterfinals.

Svitolina ousted in quarterfinals
Second-seeded Elina Svitolina was eliminated from the season-opening Abu Dhabi Open by unseeded Russian Veronika Kudermetova, 5-7, 6-3, 7-6(3) in the quarterfinal round. Svitolina twice came back from a break down in the deciding set, including when Kudermetova served for the match at 6-5, but trailed 3-0 in the tiebreak and could not recover. Svitolina’s run to the quarterfinals saw her breeze over Jessica Pegula of the U.S.A., 6-4, 6-3 and Vera Zvonareva of Russia, 6-4, 6-1, then squeeze past Ekaterina Alexandrova of Russia, 6-2, 6-7, 7-6, before succumbing to Kudermetova in the quarterfinal. Ukrainian Kateryna Bondarenko defeated Yafan Wang of China, 6-3, 2-6, 6-3 before losing to Ons Jabeur of Tunisia, 7-5, 3-6, 2-6 in the round of 32. 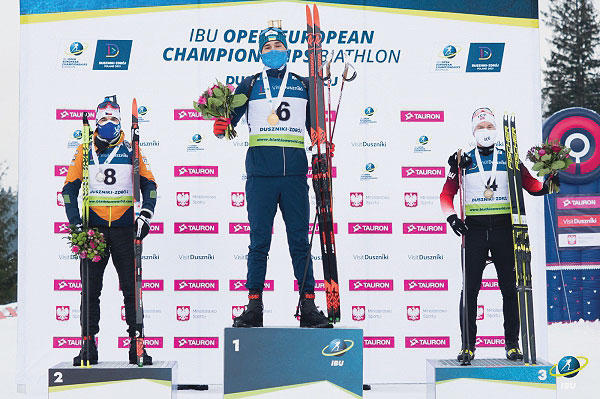 Dzhima wins silver at World Cup in Italy
Yuliia Dzhima won silver in the women’s 15-kilometer individual race (43:12.7 seconds) at the Biathlon World Cup in Anterselva, Italy, on January 18-24. Dzhima, who didn’t miss a shot during the race, finished just 43.7 seconds behind the winner, Lisa Theresa Hauser of Austria.

Bekh wins bronze at IBU Cup in Germany
Ekaterina Bekh won bronze in the women’s 12.5-kilometer individual (short) race at the IBU Cup Biathlon on January 18-23 in Arber, Germany. Bekh, who finished with a time of 37:35.3 seconds, missed only one shot during the race.

Men’s team wins silver at IBU Cup in Germany
Ukraine’s men’s biathlon team won silver in the men’s 4×7.5-kilometer relay race at the IBU Cup Biathlon on January 11-17 in Arber, Germany. Ukraine was represented by Ruslan Bryhadyr, Andriy Dotsenko, Taras Lesiuk and Bohdan Tsymbal, and the team finished with a time of 1:14:38.6 seconds (1:01.9 seconds behind the gold medal winners, Germany).

Bilodid and Khammo win bronze in Qatar
Daria Bilodid (48 kg) and Yakiv Khammo (+100 kg) won bronze medals at the Master 2021 in Doha, Qatar, on January 11-13. In the third-place matches, Bilodid won against Kataryna Koshta of Portugal and Khammo won against Temur Rakhimov of Tajikistan. Ukraine was represented at the tournament by six male and three female athletes. The tournament attracted 398 athletes (215 male, 183 female) from 69 countries.

IJF names again Bilodid world’s best judoka
Two-time world champion judoka Daria Bilodid, 20, was named a Female Judoka of the Year by the International Judo Federation (IJF) in its IJF Judo Awards for 2019-2020, having won gold medals in the 48-kg division at the 2019 World Judo Championships, the 2019 European Judo Championships and a Grand Slam Tournament. In 2020, Bilodid won gold and bronze at the Grand Slam event in Kyiv.

Pateryn traded to Avalanche, waived
Defenseman Greg Pateryn was swapped for Ian Cole, with Pateryn joining the Colorado Avalanche and the Minnesota Wild receiving Cole on January 18. The trade was a major salary-cap savings for Colorado from Cole’s $4.25 million hit to Pateryn’s $2.25 million. Pateryn, 30, had two assists in three games for the Wild this season, with four goals, and 37 assists over 270 career games with Montreal, Dallas and Minnesota. Avalanche General Manager Joe Sakic called Pateryn “a strong, veteran defenseman who plays a heavy game… he’s a hard-nosed, competitive player who can kill penalties, bloc shots and brings some additional grit to our back line.” The Ukrainian defenseman was placed on waivers on January 25 after appearing in three games with Colorado. He cleared waivers and was placed on the taxi squad, going unclaimed. He is eligible to be shuttled back and forth from the taxi squad of the AHL as waiver-exempt.

Three Ukrainians drafted in the NHL
Connor Zary, the 24th pick in the 2020 NHL Draft, was selected by the Calgary Flames. The 19-year-old’s performance improved from 11 to 24 to 38 goals, and his point totals increased from 29 to 67 to 86 in his three full seasons with the WHL’s Kamloops Blazers. Detroit chose left wing Cross Hanas from the Western Hockey League’s Portland Winterhawks with Detroit’s third selection in the second round (55th overall). In 60 games during the 2019-2020 season, the 6-foot-1, 167-pound left winger was third in goals (22) and sixth in points (49). The Nashville Predators selected Luke Prokop from the WHL’s Calgary Hitmen with the 73rd overall (third round) in the 2020 NHL Draft. The 6-foot-4, 217-pound Edmonton, Alberta, native was third among Hitmen defensemen in scoring (4 goals, 19 assists, 23 points) and claims Nashville as his favorite NHL team while growing up.

Homecoming for new Wizard Len
Free-agent center Alex Len, who averaged 7.9 points and 6.2 rebounds for his career, signed a one-year deal with the Washington Wizards on January 22 in a homecoming of sorts for the former University of Maryland 7-foot-tall player. The 27-year-old was released by the Toronto Raptors after seeing action in only seven games after signing with the Raptors this past off-season. Len replaces Thomas Bryant at center who is out with a torn ACL. This is Len’s fourth team he has played for in the past two seasons, after spending the first seven-plus years of his pro career in Phoenix, Atlanta, Sacramento and Toronto. After testing positive for COVID-19 in June 2020, he missed his last three games with the Raptors due to the league’s health and safety protocols.

Ihor Stelmach, our longtime sports columnist, wrote the listings under hockey and basketball.