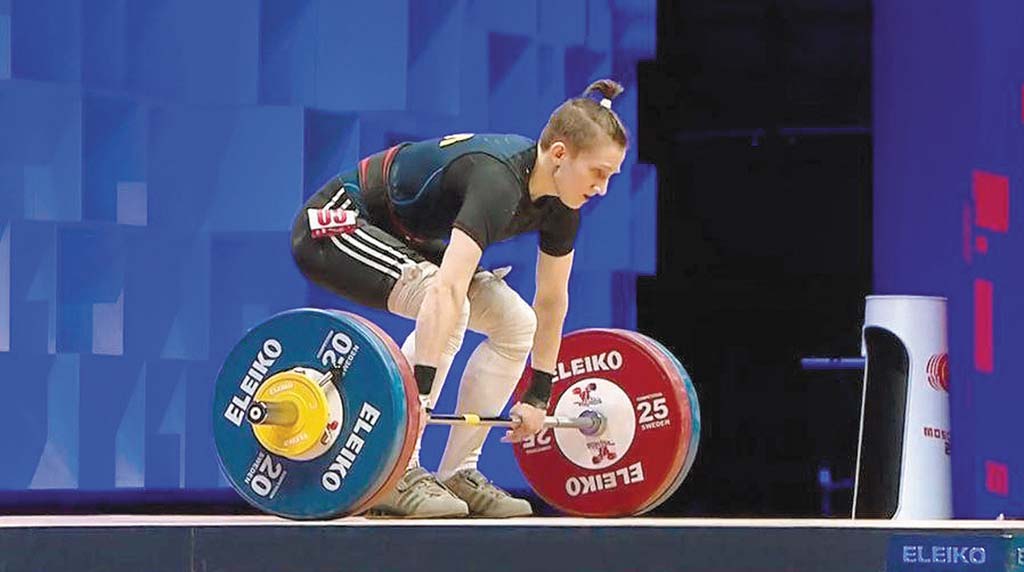 Ukraine’s junior women’s foil team (Kateryna Budenko, Kristina Petrova, Alina Poloziuk and Olga Sopit) won bronze at the 2021 Junior and Cadet World Fencing Championships on April 3-11 in Cairo. The women’s team lost the semifinal against Russia 37-45. Anastasiia Zelentsova tied with Kim So-hui of South Korea for bronze in the junior women’s individual épée event, and Valeriia Prochenko tied for bronze with Dariya Drozd of Russia in the junior women’s individual saber event. Zelentsova lost 11-15 against Jessica Lin of the U.S.A. in the semifinal, and Prochenko lost 13-15 in the semifinal against Hayoung Jeon of South Korea.

The Detroit Pistons traded Sviatoslav Mykhailiuk and a 2027 second-round draft pick to the Oklahoma City Thunder in exchange for Hamidou Diallo on March 12. This move continues general manager Trey Weaver’s aggressive remake of the roster which started last November. Mykhailiuk, 23, is the third player to depart this season after the Pistons reached a buyout with Blake Griffin and traded Derek Rose to the New York Knicks. Mykhailiuk, a third-year guard/forward and previously the longest-tenured member of the team, was mired in a prolonged shooting slump this season after knocking down 40.4 percent of his three-pointers a year ago. Through his 36 games with Detroit, he averaged 6.9 points and 1.6 assists while shooting 37.7 percent overall and 33.3 percent from three-point land. He has shown flashes as an all-around player in 2020-2021, but struggled with consistency, drifting up and down coach Dwane Casey’s rotation this year. Mykhailiuk is considered a better positional fit along the Thunder’s perimeter, and will get a chance to make a positive impression with his new squad prior to becoming a restricted free agent this summer. His salary is $1,663,861 in the final year of his three-year rookie contract he signed with the Los Angeles Lakers in 2018. In Mykhailiuk’s first game with the Thunder, he focused on ball movement, not wanting to disrupt the flow. He simply wanted to learn how his teammates play and how he could fit in. (He didn’t score in 16 minutes of action.) In his second game, he played a more active and aggressive role in the offense, seeing how the guys played, figuring out how he could contribute. (He had 15 points, four rebounds, three assists and a steal in 21 minutes.) In the third game, he made clear he had not yet shown quite everything he could do for the Thunder in the previous contest. Against the Minnesota Timberwolves on March 22, Mykhailiuk erupted to throw down a monster slam that shocked Thunder Twitter. One of the more outrageous tweets was from Charles Coryell: “Svi is literally the Ukrainian LeBron.” The Thunder went on to win the game, 112-103, as Mykhailiuk finished with 10 points.

The Houston Rockets obtained Ukrainian Canadian forward Kelly Olynyk in a trade deadline deal with the Miami Heat on March 25. Olynyk leaves a team which was in the NBA Finals a year ago, going to a team that looks bound for the NBA Draft Lottery. This season Olynyk has enjoyed some positive moments, but has struggled to find the long-range touch – he’s hitting only 31.7 percent from three-point range – that makes him such a valuable big man. Despite his poor shooting this year, the Rockets got a guy who has knocked down enough three-pointers (36.5 percent career) that he still earns respect from opposing defenses, and on the defensive end he has been known to pick up a key charge or two. The Houston organization, however, is rebuilding and the 29-year-old Olynyk may not fit their plans. It has been rumored Olynyk may hit the buyout market as he is in the final year of his current contract and is set to become an unrestricted free agent at the end of this 2020-2021 season. If he were to hit the buyout market, he would certainly help a playoff team looking to shore up their frontcourt. Olynyk (6-foot-11, 240 pounds) was originally the 13th overall pick by Dallas in the 2013 NBA Draft before his rights were acquired by Boston. In 543 career games with 141 starts (before being traded to Houston), Olynyk averaged 9.7 points, 4.9 rebounds and 1.9 assists. Going back to 2017-2018, Olynyk is the only player in the NBA to have averaged at least 10 points, five rebounds, two assists and 1.5 three-pointers made in fewer than 28.0 minutes per game. He has the fourth-most three-pointers made (645) of any player in NBA history listed 6-foot-11 or taller.

Jayce Hawryluk’s start to the season hardly went according to plan. Signed in the off-season to provide depth energy for Vancouver Canucks head coach Travis Green, he was hurt in the team’s final scrimmage of training camp in a mid-ice collision with Tyler Motte. The undisclosed injury was rumored to be either a concussion, shoulder or something else. At the time, he left the ice needing assistance and certainly did not look comfortable. Six weeks later he finally suited up for his new club, although he only got six shifts and three minutes and 28 seconds of ice time in his first game. Despite many good practices and lots of skating, he looked a bit rusty, although he showed good energy on a couple of shifts. Hawryluk was a scorer in junior, but his role in the pros evolved into that of a gritty winger who plays with endless energy at the bottom of the lineup. He never meshed with the coaches in Florida, who drafted him in 2014, a few picks before the Canucks were set to pick. He finished 2019-2020 with Ottawa and enjoyed more success there, notching seven points in 11 games. Canucks GM Jim Benning had his eye on Hawryluk at the 2014 draft, but with the Ukrainian already taken, he opted for goaltender Thatcher Demko (not Ukrainian). Benning was quick to grab Hawryluk as a free agent last fall, not the first time the GM has acquired a player years after first casting his eye on him. No matter his own history or the GM’s, Jayce Hawryluk is trying to prove that his energy can be a difference maker. He prides himself in always giving 110 percent.

NHL trade deadline activity began a bit early for the New York Islanders, who geared up to make a serious run for the Stanley Cup, adding two offensive weapons to improve their chances. In a major move made on April 7, the Islanders acquired forwards Kyle Palmieri and Ukrainian Travis Zajac from the New Jersey Devils in exchange for two minor leaguers and two draft picks. The Devils agreed to cover 50 percent of both Palmieri’s and Zajac’s salaries. General Manager Lou Lamoriello continued the trend of reacquiring former players from his previous stops as G.M. In addition to Andy Greene and Cory Schneider, Zajac is now a part of that list of players. Lamoriello drafted Zajac 20th overall with the Devils in 2004. In order to sign with the Islanders, Zajac waived his no-movement clause. “At this point in my career and where I’m at, I wanted a chance to win, and I just believe this is a team that has all the aspects of a winning hockey team,” Zajac said in a chat with the media on the day of the trade. “To be able to try and be a part of that and help them in any way, I think it was, for me, it was the right time. I was fortunate to have such a great career in New Jersey, tons of great people.” In 1,024 NHL games, all with the Devils, Zajac scored 550 points (202 goals, 348 assists) and tallied 344 penalty minutes. In the current 2020-2021 season with New Jersey, the 35-year-old center had seven goals and 11 assists. His total games played ranks fourth in franchise history, goal total ranks tied for third, assist total is fifth and points rank third. He is in the final season of the eight-year deal he signed with the Devils, making him an unrestricted free agent this summer.

In an unprecedented NHL trade deadline deal on April 10, the Colorado Avalanche acquired Ukrainian goaltender Devan Dubnyk from San Jose in exchange for Ukrainian defenseman Greg Pateryn and a fifth-round pick in the 2021 NHL Draft. Dubnyk, 34, had a 3-9-2 record, 3.18 goals-against average and .898 save percentage with the Sharks in 2020-2021. His overall 12-year career has him in 537 NHL games, a 250-204-54 record, 2.60 GAA, .914 PCT and 33 shutouts with Edmonton, Nashville, Arizona, Minnesota and the Sharks. He is Minnesota’s all-time leader in playoff games played (26), wins (8) and shutouts (2). In 2014-2015 Dubnyk finished third in Vezina Trophy voting and won the Bill Masterton Trophy for perseverance, sportsmanship and dedication to hockey. He has been selected to three NHL All-Star Games (2016, 2017, 2019). He was selected by Edmonton in the first round (14th overall) of the 2004 NHL Draft. Dubnyk was acquired for goaltending depth behind starter Philipp Grubauer and rookie Jonas Johansson with No. 2-ranked netminder Pavel Francouz still out injured. He will be an unrestricted free agent at season’s end. Pateryn served as an extra defenseman with the Avalanche after starting the current season with the Minnesota Wild. In 11 games he had two assists and four penalty minutes. He was originally selected in the fifth round (128th overall) of the 2008 NHL Draft by Toronto. In 278 NHL games with Montreal, Dallas, Minnesota and Colorado, he had accumulated 4 goals, 37 assists, 41 points and 166 penalty minutes. Pateryn, 30, is in the final season of a three-year contract he signed with the Wild, and will be an unrestricted free agent after the season.

Wyatt Kalynuk scored his first NHL goal to break a tie, and the Chicago Blackhawks held on for a 4-3 win over Columbus on April 10. Kalynuk netted his milestone goal at 3:07 of the second period when the former Wisconsin Badger, active in his seventh NHL game, threw a shot at the net and saw it trickle across the goal line to break a 2-2 tie. It took a few minutes to make it official, as the referees needed to confirm the puck crossed the goal line and that Blackhawk Brandon Hagel did not commit goalie interference while screening Elvis Merzlikins.

Daria Bilodid (48 kg) won silver at the European Judo Championships on April 16-18 in Lisbon, Portugal.  Bilodid won the semifinal match against Irina Dolgova of Russia, but lost the final against Distria Krasniqi of Kosovo. Ukraine was represented by four male and eight female athletes, and the tournament attracted 359 athletes from 45 countries.

Oksana Kozyna and Ivan Redka won gold and bronze, respectively, at the Third Dubai Para Badminton International tournament on March 30 through April 4 in Dubai, U.A.E. Kozyna won 21-10, 21-17 in the final against Manasi Joshi of India. The tournament, which is in preparation of the 2021 world championships and is counted toward ratings and qualification for the 2020 Paralympics in Tokyo, attracted 125 athletes from 29 countries. Ukraine was represented by nine athletes.

Credit to Ihor Stelmach for the entries in baseball, basketball and hockey.