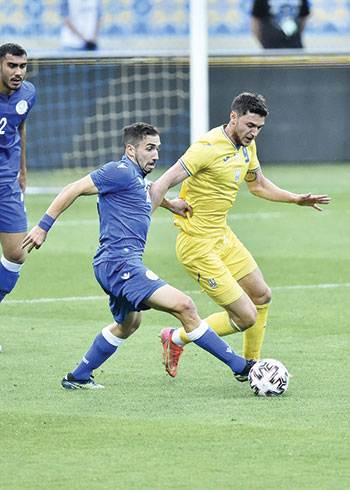 Roman Yaremchuk (right) attempts to steal the ball from a Cypriot opponent during an international friendly match.

Ukraine friendlies end in two wins and a draw
Ukraine played several international friendly matches prior to the resumption of Euro 2020 matches. Ukraine won 4-0 against Cyprus on June 7 at Metalist Stadium in Kharkiv, 1-0 against Northern Ireland on June 3 at Dnipro Arena in Ukraine and tied 1-1 with Bahrain on May 23 at Metalist Stadium in Kharkiv. Scoring for Ukraine against Cyprus were Andriy Yarmolenko (37th and 65th minute, with an assist by Marlos), Oleksandr Zinchenko (45th +2 minutes of the first half), and Roman Yaremchuk (59th minute off an assist by Marlos). In the UEFA Euro 2020 Group C matches, Ukraine is scheduled to play against the Netherlands on June 13, against North Macedonia on June 17 and against Austria on June 21. Ukraine resumes European qualifier matches for the 2022 FIFA World Cup on September 1 against Kazakhstan, on September 4 against France and against Bosnia and Herzegovina on November 16. Ukraine is ranked 24th in the FIFA rankings as of May 27.

Roman Yaremchuk (right) attempts to steal the ball from a Cypriot opponent during an international friendly match.

Dynamo Kyiv wins 13th Ukrainian Cup
Dynamo Kyiv have won their 13th Ukrainian Cup title after defeating Zorya Luhansk 1-0 in extra time. The Ukrainian Cup final took place in Ternopil on May 13. Following the conclusion of the Ukrainian Cup, Shakhtar Donetsk officially confirmed that Luis Castro is stepping down as the club’s head coach, the club’s press service reported. A meeting took place between Castro and General Director at Shakhtar Donetsk Serhiy Palkin. The Portuguese manager was presented with a T-shirt with the No. 84 (the number of official matches Shakhtar played under his leadership) and a memorable souvenir, the report said. Castro signed a two-year contract with the Ukrainian club in the summer of 2019, replacing his compatriot Paulo Fonseca. Under Castro, Shakhtar won the Ukrainian Premier League title in the 2019/2020 season. Last year, the club reached the Europa League semifinals. In total, Shakhtar had 51 wins and 16 draws in 84 matches played under the leadership of the Portuguese manager. The club scored 168 goals.

Malinovskyi named MVP in Italy’s Serie A league
Atalanta midfielder Ruslan Malinovskyi has been recognized as the Most Valuable Player for the month of May in Serie A, according to the league’s official website. The award was presented on May 23 before the Atalanta-Milan match, the report said. For May, Malinovskyi scored two goals and had three assists in four matches in the Italian soccer championship. Malinovskyi scored in games against Parma and Genoa. This season, Malinovskyi scored 10 goals and had 12 assists in 42 matches for Atalanta in all competitions. On May 19, the Ukraine midfielder scored in the Italian Cup final against Juventus (1-2), but his goal did not help Atalanta win the trophy.

Svitolina in sixth place in WTA rankings
Ukraine’s No.1 tennis player, Elina Svitolina, has remained in sixth place in a new ranking of the Women’s Tennis Association (WTA) released on May 30. Among the top-100, Ukraine’s Dayana Yastremska is in 38th place and Marta Kostyuk is in 81st place.
Kostyuk advances to Round of 16 at Roland Garros
Eighteen-year-old Marta Kostyuk served notice that she is the next Ukrainian women’s tennis star with her play at the 2021 French Open. She started the initial round of 128 by upsetting 12th-seed Garbine Muguruza of Spain, 6-1, 6-4, then defeated China’s Saisai Zheng, 6-3, 6-4, and Varvara Gracheva of Russia, 6-1, 6-2 in the round of 32. Defending champion and No. 8 seed Iga Swiatek stopped Kostyuk’s run in the Round of 16 by scores of 6-3, 6-4. The Polish Swiatek held off a fierce challenge from her Ukrainian competitor by extending her consecutive sets winning streak to 22. Kostyuk, who had not lost a set while powering through the first three rounds, piled on the pressure early, earning a break for 2-1. An unfazed Swiatek broke straight back, gaining the upper hand in the eighth game on a Kostyuk missed backhand, and serving out to take the lead. The second set saw Kostyuk go up 30-0 in the 10th game, only to have Swiatek win four points in a row. Elina Svitolina made it to the Round of 32 before losing to Czech Barbora Krejcikova, 3-6, 2-6. In her first two rounds, Svitolina beat Oceane Babel of France, 6-2, 7-5 and Ann Li of the U.S.A., 6-0, 6-4. Anhelina Kalinina of Ukraine provided an early shocker when she upset 26th seed Angelique Kerber of Germany in the first round, winning most convincingly with scores of 6-2, 6-4. Kalinina then lost to American Danielle Collins, 0-6, 2-6. In doubles action, Round of 64 play saw twin sisters Lyudmyla and Nadiia Kichenok face off against each other, with Nadiia’s duo (with Raluca Olaru of Romania) winning the family affair match (Lyudmyla was paired with Arina Rodionova of Australia). Nadiia’s team was ousted in the second round 4-6, 5-7 against Clara Burel and Chloe Paquet, both of France.

Lomachenko to fight Nakatani in Las Vegas
Lightweight Vasyl Lomachenko (14-2, 10 KO) is set to fight against Masayoshi Nakatani (19-1, 13 KO) of Japan on June 26 at Virgin Hotel in Las Vegas. This is Lomachenko’s first return to the ring since his loss by unanimous decision to Teofimo Lopez of the U.S.A. in October 2020.

Four medals for Ukraine in Croatia
Ukraine won four medals (one gold, one silver and two bronze) at the 2021 European Karate Championship on May 19-23 in Porec, Croatia. Stanislav Horuna (75 kg, kumite) won gold after winning against Rafael Aghayev of Azerbaijan in the final. Anita Serogina (61 kg, kumite) won silver, Kateryna Kryva (50 kg, kumite) won bronze and Ukraine’s men’s team (Valrerii Chobotar, Horuna, Ihor Lahunov, Ryzvan Talibov, Andrii Toroshanko, Kostiatyn Tsymbal and Andrii Zaplitnyi) won bronze in the kumite. Ukraine tied with Russia for sixth place in the medals standings, and the competition attracted 513 athletes from 47 countries (Ukraine was represented by 14 athletes). At the third European Para Karate Championships, held at the same time and place as the European Karate Champion­ships, Ukraine tied with Portugal for sixth place with one silver and one bronze medals. The European Para Karate Champion­ships attracted 49 athletes from 16 countries, with Ukraine represented by four athletes.

Runner’s World website features Samokysh
Artem Samokysh, a member of the Ukrainian Running Club New York, was featured on the cover of the official Runner’s World website for the Boston Marathon promotional campaign. The photo was shared via the Ukrainian Running Club New York’s Facebook page in a post dated April 23. The Boston Marathon is scheduled for October 11. The photo was from the 2020 Boston Marathon, taken by Boston Globe contributor David L. Ryan for Getty Images. The race in 2020 was held virtually with runners allowed to choose where they run the 26.2-mile race. Samokysh is seen in the photo running past his wife, Tatiana, and Danielle Buchma (also a member of the running club), who held a ribbon for him to pass through as he crossed the finish line. The photo can be viewed online at https://www.gettyimages.com/detail/news-photo/artem-samokysh-crosses-the-finish-line-past-his-wife-news-photo/1228527017.

Credit to Ihor Stelmach for the tennis entry on Marta Kostyuk.