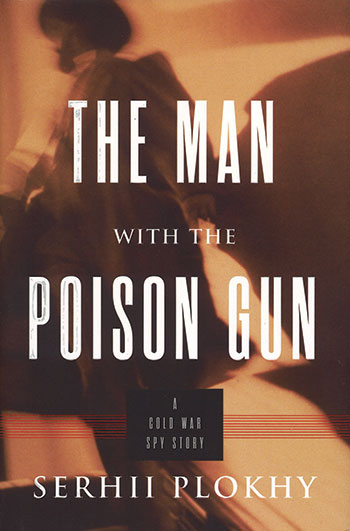 Serhii Plokhy, one of the foremost historians of the former Soviet Union, has penned a nonfiction spy thriller. Dr. Plokhy’s latest book, “The Man with the Poison Gun,” tells the story of Bohdan Stashinsky, a KGB assassin who defected to the West in 1961, just hours before the construction of the Berlin Wall, and in so doing changed the face of Cold War espionage.

Turning himself in to the authorities in West Berlin, Stashinsky confessed not only that he was a Soviet citizen and a KGB assassin, but the specific details of the murders he had committed.  He was put on trial in what would be the most publicized assassination case of the Cold War.

Stashinsky’s testimony implicated the Kremlin rulers in political assassinations carried out abroad, shaking the world of international politics.  Publicity generated by the trial resulted in the KGB changing how it operated abroad, and helped end the career of ambitious and dangerous Soviet leader Aleksandr Shelepin.

Although Stashinsky’s story captured the attention and imagination of the West, inspiring Ian Fleming’s “The Man with the Golden Gun,” there have always been doubts about its veracity.  The CIA was never totally sure whether Stashinsky was telling the truth, and the KGB denied involvement with the assassinations for decades. Using previously unavailable files from the CIA; Soviet, German and Polish archives; and memoirs and interviews of former KGB officers, Dr. Plokhy has been able to put to rest much of the early theories about Stashinsky.

Kirkus Reviews calls “The Man with the Poison Gun” a “thrilling, well-researched tale of espionage that has all the spycaft hallmarks of a blockbuster movie,” while Library Journal says  “Extensively researched and well documented, this fascinating true story will appeal to readers of spy fiction and nonfiction, and Eastern European and Cold War history.”

Dr. Plokhy is the Mykhailo Hrushevsky Professor of Ukrainian History at Harvard and the director of the university’s Ukrainian Research Institute.  The prize-winning author has written nine books, including “The Last Empire” and “The Gates of Europe.”

“The Man with the Poison Gun” is available from the publisher at www.utppublishing.com, and from online retailers such as Amazon and Barnes & Noble in hardbound, e-book (Nook and Kindle) and audio book formats.